BLOOMINGTON, Ind. -- Parents are accusing a central Indiana school of sending home a letter singling out their children because of their race.

“When I read the letter, I was kind of shocked,” said Jaylen Arthur.

Principal David Pillar gave the note all his male students who are African-American or biracial, specifically those with black and white parents.

The kids who got it say they felt wrongly singled out.

“It said our test scores are lower and we have more discipline referrals,” said Arthur. “I’ve never gotten in trouble and my GPA is a 3.96.”

The letter also introduced the boys to the program, “Young Men of Purpose.”

The principal acknowledges the original Indy-based initiative is for boys of all races, before going on to say he decided to pilot the program with the African-American and bi-racial males at his school.

“It kind of surprised me, because I don’t want to be labeled as just an African-American or biracial kid who scores lower on tests and fails at everything,” said Arthur. 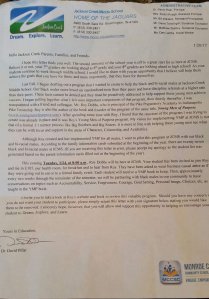 As the parents of the two dozen boys shared the letter with others, outrage spread quickly to school administration.

“We knew the program was happening, not in the capacity with which it was sent out with the letter,” said Andrew Clampitt, the Monroe County Community School Corporation’s market and public relations official.

Clampitt says Pillar always wanted the opportunity to be extended to all middle school boys, but didn’t make that clear in his letter.

Some parents don’t think the intended end result makes the content of the letter any better.

Faced with the backlash, Pillar apologized Tuesday, saying in part “I now understand that singling out students was misguided and offensive, and for that, I sincerely apologize.”

He goes on to say, “I appreciate the input, suggestions and support that I have received from the community and the conversations I have engaged in and look forward to working with you to help all students achieve success.”

Jaylen, his parents and many other parents say they wish he had gotten that kind of input before he sent the letter.

“A second set of eyes could’ve been a lot better,” said Arthur.

School officials say that at this time, they’re not sure if the program will move forward.

Jaylen, like most, believes in the mission of "Young Men of Purpose" and hopes it will one day be available to all the boys at Jackson Creek Middle School.

“I hope this program can go throughout the school and not have to have a color or certain race with it,” said Arthur.

INDIANAPOLIS -- A crash involving a semi has caused lane closures on I-65 near Doctor Martin Luther King Jr. Street in Indianapolis.

Shortly after 5 p.m. Monday, a semi crashed into the barrier wall on I-65 southbound at mile marker 116 and began leaking fuel, according to officials.

INDIANAPOLIS-- For years there has been no more popular noontime lunch spot downtown than the City Market with its more than a dozen food stalls plus a barber shop, florist, bar and merchandise.

Then the COVID-19 pandemic hit this spring.

Crews were called to the scene in the 7500 block of Timberfield Lane around 12:45 p.m. Smoke could be seen for about a mile away and when firefighters arrived, heavy smoke was showing.