According to Perry Township Schools, the school district found out about the threats on Friday night.

IMPD and DHS investigated the threats, and they identified the source within three hours early Saturday morning. The suspect is a 12-year-old student at Perry Meridian Sixth Grade Academy.

The school district released this statement on Monday:

Perry Township Schools learned of a social media threat that was made against three of our schools late Friday night. We contacted law enforcement and Homeland Security to investigate. Early Saturday morning, they tracked the student who is believed to be responsible for the threat. The student was taken into juvenile custody.

Safety is our top priority, and we will continue to be vigilant in protecting our students. We are thankful to the social media users who saw the threat and notified our district. We also appreciate the efforts of law enforcement and Homeland Security who acted fast to identify the origin of the threat.

FOX59 talked with multiple students who said the threat came in the form of an Instagram post, under the account “Get Blown Up Perry.” The post made threats to Perry Meridian Middle School, Sixth Grade Academy, and High School.

One of the students who reported the post said initially, he and his friends thought it was a joke.

“The picture was a cartoon and so we were like, ‘What the heck is this?'” that student, who asked to remain anonymous, said. 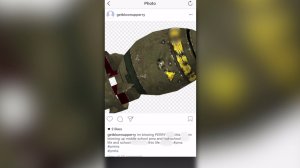 Despite laughing at the photo, the students decided to tell an adult and report it, initially calling the school’s tip line and then police. When IMPD immediately sent an officer to their location, the student said he realized how serious the threat really was.

That student’s mother told us that she’s proud of their decision to say something, and was happy with the way both police and the district handled the situation.

D.J. Schoeff, 2nd Vice President of the National Association of School Resource Officers, said the kids did the right thing.

“We really want kids to know that they are the police of their own schools,” Schoeff said.

Schoeff said that school resource officers are trained to take every threat seriously, and to look into why a student makes a threat. He said part of the training is to understand that kids’ brains are not fully developed and their decision making is not always like that of an adult.

“We train on that so we understand what that teenage brain or that child’s brain is doing and where they are in life to help better understand the decision making that they’ve gone through and ultimately, so that we can help that individual, that student, become successful,” Schoeff said.

A spokesperson for the school district said when they have incidents like this, principals in each of the schools will talk with students about the ramifications that can come from threats, harassment, and intimidation through social media.

Police did not say what will happen to the 12-year-old next. He was taken to juvenile detention on charges of intimidation.