INDIANAPOLIS – Indiana Attorney General Curtis Hill on Tuesday clarified the state’s law regarding the use of cannabidiol (CBD) oil that has led to confusion.

Hill told FOX59’s Matt Smith that CBD oil is illegal to sell or possess in Indiana–with the only exception being people with epilepsy conditions specifically outlined in legislation. “CBD is a derivative of the marijuana plant, and by definition is still marijuana, and by definition is still a schedule 1 drug  which is still unlawful under the current state of the law,” Hill told Smith.

Hill said this means the oil is subject to seizure from retail outlets that sell it. That leaves an unanswered question: How will people who are lawfully allowed to use CBD obtain it?

“There is no doubt, as a matter of legal interpretation, that products or substances marketed generally for human consumption or ingestion, and containing cannabidiol, remain unlawful in Indiana as well as under federal law,” Hill said in his opinion, which can be read in full here.

State lawmakers passed a bill—later signed into law by Gov. Eric Holcomb in April—that allowed people with treatment-resistant epilepsy to use CBD as part of a state registry.

The law requires that products containing CBD, an oil derived from marijuana, must contain less than 0.3 of THC, the active ingredient in cannabis.

Advocates of the treatment said it can help lessen the severity of seizures—and studies appear to bear that out. Parents whose children have treatment-resistant epilepsy voiced their support for CBD oil during legislative hearings.

Earlier this year, the Alcohol and Tobacco Commission announced a moratorium on the confiscation of CBD products from area stores. The announcement came after excise police cited stores for selling CBD products.

Even after the moratorium was announced, excise police warned one store and cited another for potential violations. A spokeswoman said those incidents were “issued in error.”

However, the cases illustrated how confusion over the law has led to difficulties in enforcing it.

Earlier this month, parents of a southern Indiana girl said DCS threatened to take away their daughter because they used CBD oil to treat her seizures instead of using what doctors at Riley Hospital for Children at IU Health had prescribed.

Rep. Mark Messmer, R-Jasper, intervened on the family’s behalf and said the new law needs to be clarified. He said the state’s response was “heavy-handed” and an “overreaction.”

Meanwhile, other groups continue to push for medical marijuana in the state, which CBD oil would not classify as. The Indiana American Legion wants medical marijuana for use by veterans as a treatment option, and Indiana NORML put up this billboard in Indianapolis.

It’s located near I-70, west of the Harding Street exit. 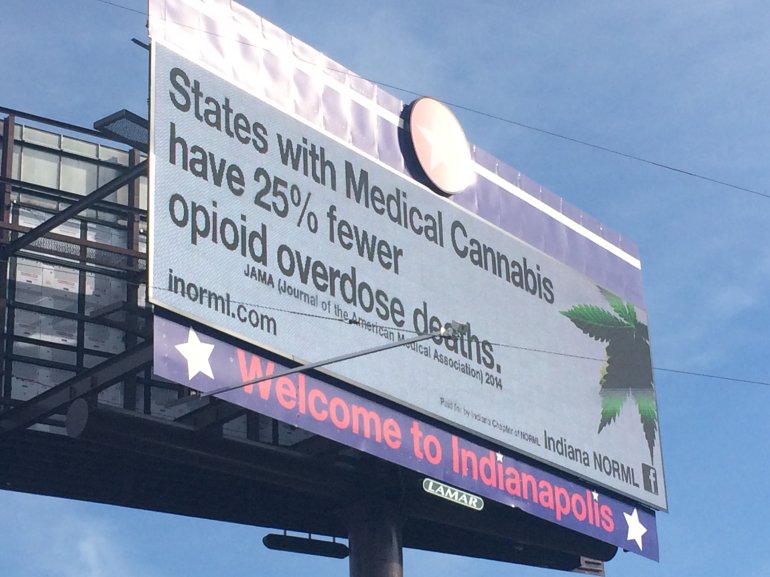