MUNCIE, Ind. — Residents and the Muncie Housing Authority say power has been on and off since July 5 at one apartment complex, and there's no end in sight.

The housing authority tells FOX59 it all started over a shortage in electrical wiring. Now they're working feverishly to get things back to normal.

“I had partial power on the first go-around, and then when they went out yesterday morning about 1:30, I have nothing. Nothing at all now,” said Phyllis Parsons.

Parsons has only been living at the Gillespie Towers on Jackson Street for two months. But many in the community and at the complex are pitching in to make sure things are running smoothly.

“Our staff has been working with electricians around the clock to troubleshoot and get to the problem,” said Muncie Housing Authority Chief Executive Officer Joseph Anderson.

Thirty-six of the 98 units have partial power, meaning some outlets may not work and they may or may not have air conditioning.

“I had air, and I also had access to a couple of outlets and stuff which I ran a cord and stuff. So it wasn’t very bad,” said resident John Stankiewicz.

This all falls on the hottest weekend in central Indiana in several years.

Anderson did not allow our crew to shoot video inside, but in these photos, you can see cots lined up in the kitchen where they set up air conditioning. 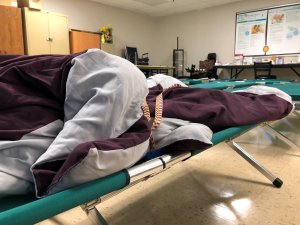 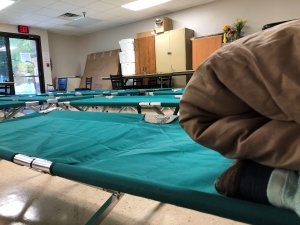 “Those individuals who have decided that they wanted to stay, we’ve had them to sign off on documentation stating that was their choice because we can’t force them,” said Anderson.

But now it's a waiting game. They are working with contractors to get things fixed, but the parts have to be sent to Detroit for repairs before they can be installed at the apartment complex.

“I know it’s frustrating but we’re doing everything that we can do to address the matter,” said Anderson.

He adds that his staff is doing everything they can to keep people comfortable. They're asking everyone to stay cool and pack their patience.

“You just gotta have time with something like this,” said Parsons.

They don’t have an exact timeline of when things will be back to normal, but the housing authority says they’re doing everything they can to get power back on.