What does it mean?

That’s the question many people are asking after a tweet from President Donald Trump. The tweet went up around midnight and appears to be a half-finished thought or a misspelling.

“Despite the constant negative press covfefe,” the tweet reads. The president, who’s known as an active Twitter user who often takes to the social media platform to discuss the news of the day, left the tweet up for several hours before deleting it around 5:45 a.m. 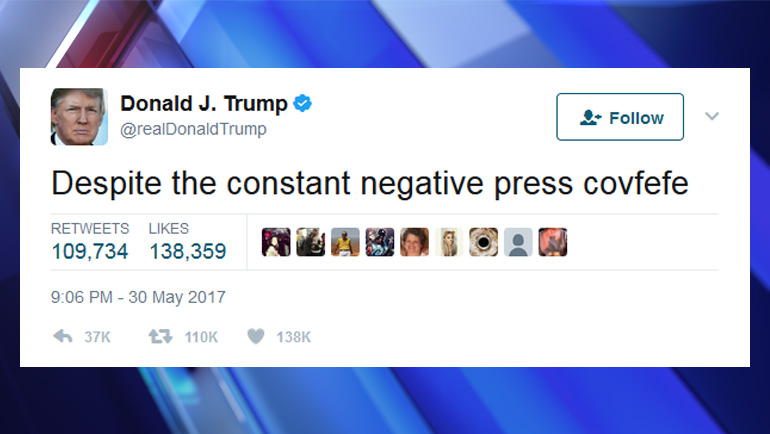 The president appeared to have some fun with it Wednesday morning, tweeting: “Who can figure out the true meaning of “covfefe” ??? Enjoy!”

Who can figure out the true meaning of "covfefe" ??? Enjoy!

So far, the tweet has more than 123,000 retweets and more than 157,000 “likes” on Twitter. People have also replied to the president some 40,000 times, many of them baffled by the meaning behind “covfefe.” The hashtag #covfefe quickly became a trending topic, and Twitter users had plenty to say about it:

An FBI director once tried to test me. I ate his #covfefe with some fava beans and a nice chianti… pic.twitter.com/ka2WZI0dmX

$10 says it's the nuclear codes #covfefe

Where is Sherman? Premier Total Healthcare

Brothers give back with lemonade stand

Brothers give back with their lemonade stand

‘She had a kind heart’: Family pleads for justice …

Colton Herta rocks with The Zibs

Man killed in hit-and-run while biking on east side

Teen in serious condition after east side shooting

Here’s when Hagerstown plays in the LLWS

Here’s when Hagerstown plays in the LLWS

Man killed in hit-and-run while biking on east side