WEST LAFAYETTE, Ind. — As of October 2019, the Gun Violence Archive claims there’s been more mass shootings than days in the year.

When authorities aren’t responding to this kind of violence, they’ve often been at the frontlines of several natural disasters.

Purdue University is working on technology that deals with both.

It comes at a time where the many mass shootings or national threats have had a connection to social media or online content.

Investigators say 19 minutes before the El Paso, Texas, mass shooting at a Walmart, the suspected gunman posted an anti-immigrant manifesto warning of a “Hispanic invasion” to an online message board. Authorities say he later went on to kill 22 people, many of whom were Latino.

In New Zealand, the shooter live-streamed the massacre on Facebook and posted a manifesto to the same message board used in El Paso. At least 51 people at or near the mosque died in the mass shooting.

A mail bomber, who was just sentenced to 20 years in prison this August, posted to Twitter and Facebook multiple times threatening Democratic leaders. He later went on to send pipe bombs to at least 13 targets, which included Democratic leaders, Democratic donors and CNN.

“There have been a lot of instances that you can go back and research through active shooting incidents where the suspect has blogged, posted, or made some sort of comment on social media,” said Capt. Keene Red Elk of the Purdue University Police Department.

Research and recent arrests back up the captain’s statement.

Since the nation’s last mass shootings in El Paso and Dayton, Ohio, the FBI says agents arrested more than a dozen people, many of whom made threats on social media.

“It’s not getting any better out here, the threats we’re seeing throughout the United States,” Red Elk said.

Now more than ever, investigators are looking at how a profile or an account could be a crime prevention tool. Purdue is leading that effort in a partnership with the U.S. Department of Homeland Security through the “Smart App.”

“We create a software where the first responders can see these posts on a map,” said Dr. David Ebert, a Silicone Valley professor of electric and computer engineering. “It goes and gets all of the publicly available social media posts from Twitter that anyone can go to their website and query.”

While the app can be used toward preventing violence by detecting threats, it can also be a rescue tool during natural disasters.

During Hurricane Harvey in 2017, a Houston mom trapped with her 2 kids turned to Twitter to get rescuers’ attention.

As did one nephew looking to rescue his aunt who just had surgery. 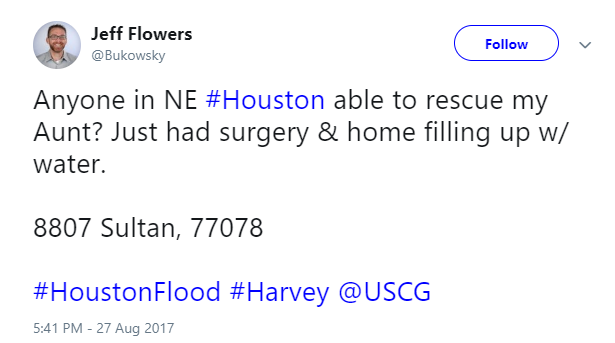 Even the Harris County Sheriff sent a Twitter SOS to rescue a pregnant woman in labor.

With this app, authorities can pinpoint these tweets and even find connected Instagram posts, which often have locations attached.

“Through this graphical and easy to use interface, they’ve been able to get information from crowd sourcing 5-10 minutes quicker than other sources of information coming in,” Ebert estimated.

For Purdue University’s Police Department, the app is a tool for large campus events, such as football games, where 57,000-plus people can pack into Ross-Ade Stadium.

“If we get that small time frame where we know somebody is about to do something bad, hopefully, we can jump in front of it and stop an act before it happens,” the police captain said.

Red Elk said the app has already flagged concerning posts, and officers checked it out and later ruled out any real threat.

It’s a technology tool he never saw coming 23 years ago when he joined the force, but one he and other officers say they’re thankful for today.

Meanwhile, Purdue continues to develop the app so that the technology can do a better job of separating a threat from a common phrase — something like, “I’d kill to be at that game,” versus “I’m going to kill someone at that game.”

Developers are also considering privacy concerns. The app only populates public accounts and makes all Twitter handles anonymous to users on the SMART App.

Those new cases were reported to ISDH between Sept. 11 - Sept. 19, following corrections to yesterday's dashboard.

KOKOMO, Ind. -- Three people were killed Sunday during a plane crash in Kokomo, according to the Howard County Sheriff’s Office.

How to fix Spanish audio on FOX by using SAP controls