INDIANAPOLIS, Ind. – Residents of an Indianapolis mobile home park say they’ve been left in a bad situation after being told they need to pack up their things and leave.

Those who live at the I-70 Mobile Home Park say they were given a notice Wednesday, alerting them that the owners would be shutting the park down. 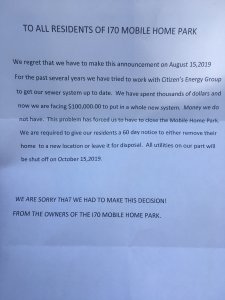 The notice describes a $100,000 payment for sewage system repairs that the owners can’t afford. It then tells the residents they have 60 days to move their trailers and vacate the park. The same notice also sits on the door of the park’s management office.

“We’ve been faithful to them and paid our lot rent, and here they are. It’s like they’re turning their backs on us,” resident Jay Morehead said.

Many residents of the park say they don’t have the money to move. They add that the 60-day notice doesn’t provide enough time for them to move, and even if they had the time, many of the trailers in the park were built decades ago, and not in any condition to be disturbed.

“In an apartment you get 60 days to move out, and you can move your belongings in 60 days. They’re giving these people 60 days to move an entire home,” Nathanna Bunch said.

FOX59 reached out to park ownership but was unable to reach anyone. Messages were left at numbers provided by residents. The manager’s office at the mobile home park was also closed.

Many of the residents question whether the evictions are legal and are considering legal action to delay or stop the evictions. Legal experts say in Indiana, if ownership has provided enough notice to residents, they are within their rights to shut down the property and evict.

Retro Toys That Are Cool Again from Toy Insider

Angela Answers: How to Manage Divorce During the …

Where is Sherman? Rail Café & Market

Breaking down the names entered into the Governor’s …

Ben Davis HS student arrested for having a handgun …

Person in critical condition after shooting in Popeyes …

How to protect yourself against mail thieves

Indy among US metro areas with the worst air pollution