INDIANAPOLIS, Ind.– Controversy over Broad Ripple Park has both sides speaking out as the neighborhood plans to make room for development.

The Department of Metropolitan Development recently approved a proposal for Indy Parks to transfer land. That land isn’t being used now, but it could be home to a medical clinic, along with a new community center.

It also would mean the Indy Parks would make money off those businesses to keep the park open, but park visitors have questions.

We spoke with two men with two very different views on what should happen at the Broad Ripple Park.

“I love seeing the development, I think that’s necessary for it to grow,” said Tom McCain, the President of Friends of Broad Ripple Park.

However, resident David Dearing said, “That should be a last resort.”

McCain is for development. He says a doctor’s office or clinic built in the park, along with a new community center, is critical.

“We cannot improve our parks if we don’t come up with the money to do it,” said McCain, “Let alone sustain them.”

That’s why they’re looking for innovative funding like the medical clinic. However, Dearing disagrees.

“We have so little park land it doesn’t make sense to give up part of it up for commercial development,” said Dearing, “Try to sell the naming rights to the family center, before you give up part of the park.” 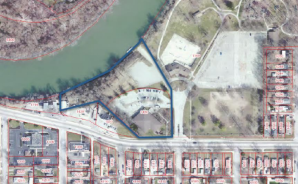 This photo shows the space that will be used for the new building. Right now, it’s empty. The trust for public land has a survey on the 100 largest cities and how they support their parks.

Indiana competes for last. That’s a trend McCain says needs to end and it’s why he’s pushing for development.

“I have calculated how much of our property taxes and income tax go to provide the portion of city budget that goes to Indy Parks, and for my wife and I combined its about 63 cents per park, per year,” said McCain.

He wants others to jump on board.

Dearing, on the other hand, wants neighbors to keep fighting.

“Contact Indy Parks to tell them this is a bad idea to give up open space in the park,” said Dearing.

Indy Parks provided this statement regarding the development:

“Broad Ripple Park is a beloved community asset, and the Indy Parks Department is grateful for the hundreds of residents who voiced their opinions during the recent master planning process, helping to chart a 20-year vision for this facility.
As we explore opportunities to partner with a health care entity, we are committed to building upon the park’s history, as well as increasing and improving park resources for residents and their families.”

As for the Broad Ripple Park pool, it will remain open for now. They are currently hiring for lifeguards and staff for the summer season. However, in the future, there are suggestions to turn it into a splash pad or indoor pool.

INDIANAPOLIS– Indianapolis Metropolitan Police arrested a woman for her role in a stabbing that killed two people and wounded another.

INDIANAPOLIS -- Police are investigating after a shooting left one person in critical condition Tuesday.

The shooting happened in the 10100 block of Montery Road around 12:25 p.m. Tuesday. When police arrived, they found a person in critical condition.

After months of sports season suspensions, professional leagues are trying to figure out how to kick things back into gear.

Teams across various organizations are beginning to reopen their practice facilities for individual players to train. Leagues are in talks to resume their seasons, albeit under very different circumstances. And while sports are unlikely to look the same for a while, it appears that things are moving along.

‘I can’t breathe’: Video shows officer kneeling on man’s neck before he died in police custody