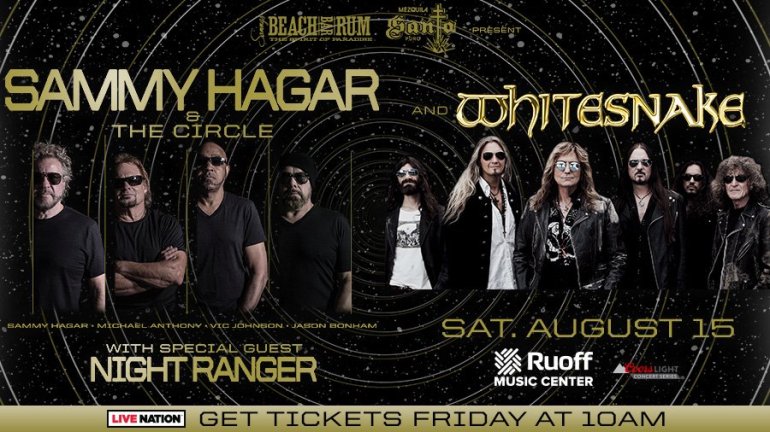 INDIANAPOLIS, Ind. — Sammy Hagar with his band The Circle have teamed up with Whitesnake for a summer tour including a show in Indianapolis.

The U.S. tour will stop in 30 cities and features special guest Night Ranger on all dates.

Promoter Live Nation said this tour delivers an incredible summer evening of music at some of the most scenic outdoor amphitheaters in the country.

The tour will come to Ruoff Music Center in Noblesville on Saturday, August 15 as part of the Coors Light Concert Series.

Live Nation previewed the tour in a release, stating:

To celebrate, Hagar and Coverdale released a special video discussing their first impressions of each other, memories, touring then-versus-now, and more.

Fans can expect The Circle to perform a wide range of Hagar classics from Montrose, Van Halen, Sammy’s solo career, as well as the band’s debut album, Space Between, which landed them the #1 Rock Album on the Billboard 200 in 2019.

Whitesnake is led by David Coverdale and is known for a catalog of powerful hard rock and chart-topping power ballads, including the anthems “Here I Go Again”, “Still of the Night”, “Fool for Your Loving”, and “Is This Love.”

Hagar said, “I love some friendly competition on stage and that’s exactly what this is going to be. David and I have nothing but the highest respect for one another, but we would also like to blow the other guy off the stage! Add in Night Ranger and the fans will have one hell of a night of music.”

Tickets go on sale to the general public on Friday, January 31 at 10 a.m. at LiveNation.com.

INDIANAPOLIS, Ind. -- The Indiana Department of Transportation says it has reopened an I-70 ramp on the east side of Indianapolis after repairing damage caused by Thursday’s tanker explosion.

BLOOMINGTON, Ind. -- A man who plays football for Indiana University has been arrested after a domestic incident in Bloomington, according to the Bloomington Police Department.

Around 11:15 p.m. Saturday, police were called to a home in the 2300 block of South Brandon Court after a 22 year-old woman reported that a man she was familiar with had just left her residence after taking her cell phone from her and assaulting her.

ATLANTA, Ga. -- A faith-inspired, progressive podcaster made some major waves in the discourse surrounding the 2020 Democratic primary last week.