JACKSON COUNTY, Ind. – The Indiana State Police (ISP) have arrested the driver of a semi for operating while intoxicated after a crash on I-65 Monday morning.

ISP said all lanes of northbound I-65 was closed for nearly eight hours at the 51.5 mile marker near Seymour after the semi ran off the road and overturned.

The driver of the semi, James M. Murphy, 56, of Kentucky, was arrested for operating while intoxicated after a breath test showed a blood alcohol content of 0.26%.

Murphy was taken to the Jackson County Jail and was also cited for an open container violation and disregarding a traffic control device.

Police said neither Murphy nor his female passenger were injured in the crash. 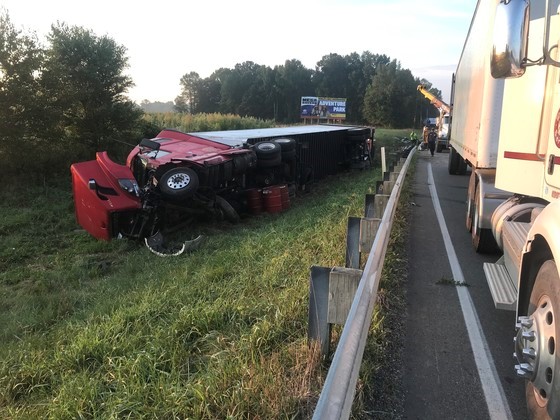 I-65 Northbound is now back open in Jackson County. The roadway will remain down to one lane near the 52 mile marker for guardrail repair. https://t.co/HgzLiep2Os

INDIANAPOLIS – Police are searching for a teen boy who they say stole a gun from a man and fired shots at him.

On June 18, police say the teen stole the victim’s handgun from his holster and pointed it at him.

MORRISON, Colo. (KDVR) – Health officials in one Colorado county are warning residents after a squirrel tested positive for bubonic plague.

The animal was found in the Town of Morrison, about 17 miles southwest of Denver.

The Kansas City girl's body was found in what police describe as a shallow grave off a path about nine hours after her father, Howard Jansen III, reported her missing Friday.

While you were sleeping: Coronavirus updates for July 14

What you need to know about contact tracing, how it works with COVID-19

Man randomly shot in neck while driving on I-465, victim’s girlfriend says

Why Hoosiers may see delays in COVID-19 test results

Man randomly shot in neck while driving on I-465, victim’s girlfriend says

While you were sleeping: Coronavirus updates for July 14