BLOOMINGTON, Ind.– The state issued an advisory for several Indiana recreational spots that could have high amounts of blue-green algae.

The Indiana Department of Environmental Management issued the recreational advisory Friday. Blue-green algae has been in the headlines this week after several dogs in the southeast part of the country died from being exposed to it. 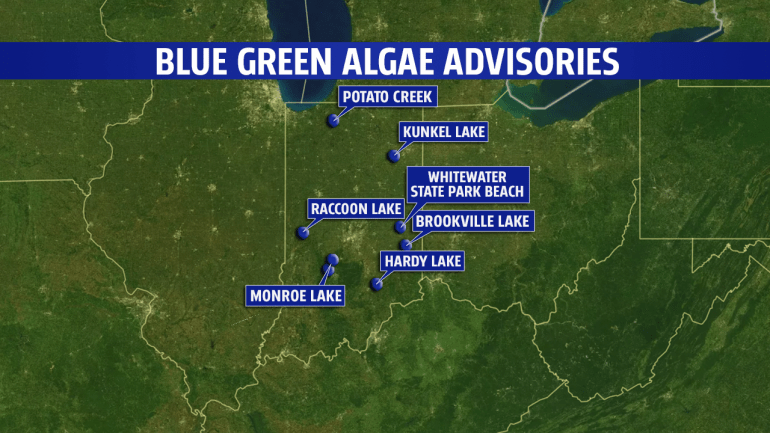 The advisory includes the following areas, which showed high levels of blue-green algae:

Anyone who does go in the water should shower off as soon as possible, Brown says.

The advisory also says you should avoid allowing your pets to drink or swim in lake water under the advisory.

“Algae blooms can be harmful to animals to drink the water, and we advise them that they shouldn’t allow them to do that,” Brown said.

Last week, a woman in North Carolina lost three dogs to algae poisoning after they went swimming in a pond.  Brown says DNR has not received any reports of pet deaths in Indiana during this advisory.

According to the DNR’s website, Blue Green Algae are capable of producing several different toxins.  The toxins can cause rashes, skin or eye irritation.  It can also cause nausea, stomach aches and tingling in the fingers and toes.

Animals are not necessarily more vulnerable to the algae toxin effects, but they are more likely to drink larger amounts of lake water while playing.

“Symptoms may range from lethargy and loss of appetite to seizures, vomiting and convulsions. Consumption of large quantities of the toxins could potentially cause death,” according to the DNR website.

Dogs can also be susceptible to algae “scum” attaching to their fur after playing in the water.  That scum can be swallowed during self-cleaning.

Algae blooms can be fueled by excess lawn fertilizers and runoff from pastures, feedlots, lawns and golf courses.  They can also be fueled by drainage from sewage systems, as well as warm, sunny weather.

Brown says when the Blue Green Algae blooms, the algae come under stress and die off.

“When they have a die-off is when they release the toxin that can become harmful to humans and animals,” he said.

Brown also says people should not assume they are clear of the algae simply because they can’t see it.  At current levels, the algae may not be apparent to the eye.

“When people think of really harmful algae, they think of a big bluish green mass on the water,” Brown said.  “That’s not something you’re seeing on here.  We have algae in the water, but you’re not seeing any green masses here along the lake.”

Sampling of the water began on May 13 to coincide with the opening of swimming beaches around the state. Testing will continue through Aug. 26. You can learn more about Blue Green Algae, and the DNR’s current list of advisories on their website.

NEW YORK (AP) — Cleaning wipes are harder to find on store shelves, and businesses are reassuring customers with stepped up sanitation measures. In New York, the subway system is shut down nightly for disinfecting.

To avoid any traces of the coronavirus that might be lurking on surfaces, Americans have been wiping down groceries, wearing surgical gloves when they go out and leaving mail packages out for an extra day or two. But experts say the national fixation on scrubbing sparked by the pandemic can sometimes be overkill.

NEW ORLEANS -- This past August a bill was signed into law in Louisiana that allows doctors to prescribe medicinal marijuana more freely to patients with a wide array of ailments, but this is the latest in a series of actions that stem back to 1970's in the state.

"There's a fear of addiction and a fear of seeing children or patients inebriated. Medical marijuana is not your first reaction when you hear the word autism, but when you work through your options, it might occur as a really good safe alternative," says Katelyn Castleberry, a mother of two sons who have autism.

HOWARD COUNTY, Ind. -- Up until two weeks ago, Howard County Sheriff Jerry Asher thought his staff had done a good job keeping the COVID-19 virus out of his jail.

“We’ve got a disinfecting machine that helps us clean large areas,” Asher said during a recent briefing on Facebook. “We also bought two atomizing backpack sprayers that almost constantly move around the facility getting anything people sit down, touch, rest room areas, open day rooms, the handrails. We’ve increased the numbers of bars and soap to our indigent inmates so we can facilitate that hand cleaning.”

Consumer spending up a slight 0.5% as virus maintains grip

Macy’s Thanksgiving Day Parade to march on despite pandemic

Environmental priorities for Indiana lawmakers in 2021

Millions of Americans face food insecurity due to pandemic

‘Beyond heartbreaking’: State officials respond to current COVID trends ahead of Thanksgiving