The Ford was driven by Ryan R. Dixon, 29 of Bloomington. For unknown reasons, Dixon drove left of center and failed to negotiate the right hand curve in his path.

Dixon, who was initially trapped inside his vehicle, was rescued by emergency crews at the scene and transported to IU-Health /Bloomington for treatment.

The driver of the semi, Steven M. Levine, 58 of Bloomington was not injured. 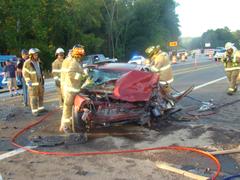 Portions of State Road 37  between Martinsville and Bloomington have been with on-going construction since late Spring and have also been subjected to numerous accidents.

State Police have beefed up patrols in the area while INDOT has increased signage to warn drivers of the work zone.

(WPRI/NEXSTAR) — As the nation finds itself deep in the throes of a pandemic, Nexstar stations from around the country are providing updates each night at 9 p.m./8 CST with the latest coronavirus headlines.

Tonight, there are new CDC recommendations on face masking but President Trump says he’s not wearing one, the New England Patriots deliver the masks they got in China, the nationwide battle for PPE escalates, and other updates from around the country.

"As the country continues efforts to manage and mitigate the devastating health and economic impacts of the COVID-19 virus, Hobby Lobby will, after careful consideration, close the remainder of its stores, and furlough nearly all store employees and a large portion of corporate and distribution employees, effective Friday, April 3rd, at 8:00 p.m," the company said in a statement.

BURLINGTON, N.C. (WGHP) - A North Carolina emergency department physician is sleeping in an RV outside his home to keep his family safe.

Initially, Dr. Mark Quale, who works at Alamance Regional Medical Center in Burlington, began using tarps in his home to separate himself from his wife, two young children and mother-in-law.