Researchers at Nationwide Children’s Hospital in in Columbus, Ohio analyzed suicide rates of US kids and teens ages 10 to 19 between 1975 and 2016 using the Wide-ranging Online Data for Epidemiologic Research database, run by the US Centers for Disease Control and Prevention.

In that period, there were more than 85,000 suicides in kids and teens, with 80% in boys and 20% in girls. The rates of suicide peaked in 1993 and had been on the decline until 2007, when they again started to climb, according to the findings, published Friday in JAMA.

Although boys were 3.8 times more likely than girls to kill themselves over the 40-year study period, the gap is rapidly narrowing. Starting in 2007, the rates of suicide for girls 10 to 14 increased 12.7% per year, compared with 7.1% for boys the same age. A similar trend was seen for teens 15 to 19, with rates of suicide going up 7.9% for girls and 3.5% for boys. 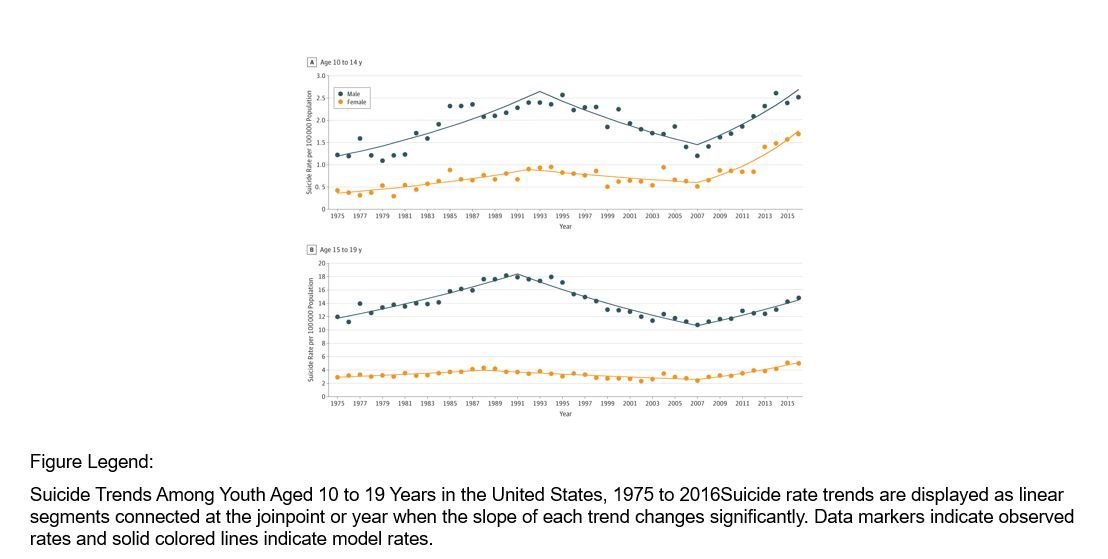 Boys 15 to 19 continued to take their own lives using firearms at far greater rates than girls, but the rates of hanging and suffocation in girls approached those of boys.

Suicide is the second leading cause of death in kids and teens ages 10 to 19 in the United States after accidents and unintentional injuries, according to the CDC. Rates of suicide have historically been higher in boys than in girls across all age groups.

Girls turning to more lethal means is cause for “great concern,” explained lead author Donna Ruch, research scientist at Nationwide Children’s Hospital, adding that girls continue to attempt suicide at higher rates and the shift toward more lethal methods could have dire consequences for the rates of completed suicide in this group.

The study was not designed to determine the reasons behind the troubling trends, explained Dr. Joan Luby, a child and adolescent psychiatrist at the Washington University School of Medicine, and Sarah Kertz, a clinical psychologist at Southern Illinois University, in a commentary published alongside the study in JAMA.

But given the short period of time over which the rates of suicide have spiked for young girls, Luby and Kertz point to social media as a likely contributor.

“Compared with boys, girls use social media more frequently and are more likely to experience cyberbullying,” Luby and Kertz wrote.

Girls who are depressed also elicit more negative responses from their friends on social media than boys, they added.

Combined, they say, these findings suggest that the negative effects of social media may be stronger on girls and may provide one explanation for why young girls are more vulnerable to suicidal thoughts and behaviors.

Yet social media may be just one piece of the puzzle.

The role of societal rules and expectations

“We know that certain societal rules and expectations for women can be associated with higher rates of mental health issues and suicide rates,” said Dr. Barbara Robles-Ramamurthy, child and adolescent psychiatrist at the Long School of Medicine at UT Health San Antonio, who was not involved in the study. “Then you add a possible biological component — hormones — and a genetic predisposition.”

Another reason for the rise in depression and suicidal behaviors for both boys and girls may be more stress and pressure being placed on kids, said Dr. Gene Beresin, executive director of the Clay Center for Young Healthy Minds at Massachusetts General Hospital and professor of psychiatry at Harvard Medical School, who also was not involved in the study.

“Kids are feeling more pressure to achieve, more pressure in school, and are more worried about making a living than in previous years,” he said.

In isolation, none of these factors has been proven to lead to an increase in suicidal behaviors and ultimately suicide, but taken together, a pattern begins to emerge, Beresin said.

Mental illness — especially when it comes to depression and anxiety — can be silent or manifest in ways parents would not expect, Robles-Ramamurthy said. In addition to sadness, depression in kids and teens can manifest as anger and irritability.

“It’s very normal for your child to start getting a little more moody and defiant,” she said of the teenage years. “But if you start seeing drastic changes, their academic performance is declining, they’re not spending as much time with family or isolating themselves, those are big red flags.”

If those behaviors are present, Robles-Ramamurthy recommends asking teens clearly whether they feel depressed or have considered hurting themselves or ending their lives. Asking these questions directly does not increase the risk of suicide, she added.

ATLANTA (AP) — For many Americans, the Fourth of July will be more intimate this year. It also could be riskier.

Saturday will be unlike any Independence Day in recent memory. From Atlanta to San Diego, hundreds of fireworks shows have been canceled as officials restrict large gatherings during the coronavirus pandemic, especially as infections surge across the U.S.

HOOVER, Ala. (AP) — An 8-year-old boy was killed Friday in a shooting at an Alabama shopping mall that left three other people injured, police said.

Hoover Police Chief Nick Derzis said the child was killed in the afternoon shooting at the Riverchase Galleria. The police chief said a girl and two adults were also hospitalized after the shooting.

WASHINGTON (AP) — On an average day, President Donald Trump sends about 14 posts to the 28 million Facebook followers of his campaign account. His Democratic rival, Joe Biden, delivers about half that many posts to an audience of just 2 million.

The numbers are similarly skewed in other spheres of the social media landscape.

Speedway hopes fans will celebrate brickyard in their back yard

How to prevent mosquito bites this summer

US issues guidelines but no new rules for safe air travel

The psychology of wearing a mask