Arlen Brennaman of Syracuse scratched the ticket, $7 Million Mega Cash, in the passenger seat of his brother’s car as the two headed back to work in Goshen. They had just left the Chalet Party Shoppe where Brennaman had unknowingly just written himself into the Hoosier Lottery record books. The 30-something man found himself holding a $7 million winning ticket. 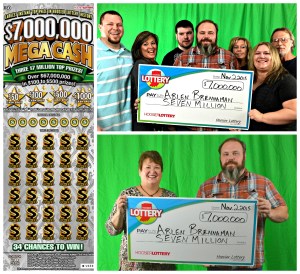 He had just won the largest prize ever offered on a scratch-off in Indiana.

Brennaman’s main goal is to turn the money into a legacy that makes life better for his whole family. He sees winning as an opportunity for his family to go into business for themselves and invest in a way that turns the initial windfall into something sustainable beyond their next generation.

“There’s no reason we can’t all live comfortably,” said Brennaman. As the winner of the biggest scratch-off prize in the history of the Hoosier Lottery, Brennaman finds himself in a position to make it happen.

WHERE IS SHERMAN? GLOBAL GIFTS