BLOOMINGTON, Ind. – As the nation prepared for National Night Out events across the country meant to foster tighter relationships between police and communities, graffiti left behind at a Bloomington business caught many by surprise.

Jump-N-Joey’s was set to host a National Night Out event Tuesday with the Bloomington Police Department. A flier described the event as a chance for residents to mingle with officers and discuss concerns within their community.

However, someone spray painted the words “Tamir Rice” on the side of the business overnight. That’s the name of a 12-year-old boy who was fatally shot by police in Cleveland in 2014.

The owner of the business, Chance Jeffress, had crews were working to remove the graffiti Tuesday afternoon, but it proved to be stubborn.

"We never really perceived any risk. Communities do this across the country with no issues," Jeffress said.

“This is not who we are as a community!” the post read. “We do not target small business owners who host events with the Bloomington police department! We support and love the police. Tamir Rice is not being honored by vandalizing small business owners! So sad and angry.”

Firefighter Joe Radanovich saw the post and brought out his own power washer, helping to clean up the mess at no charge.

"We got it to the point now where the kids can just come out and think that somebody colored on Jump ‘n Joey’s," Radanovich, who frequently brings his daughter to the business, said.

"It wasn’t going to stop us ... (or) Jump ‘n Joey’s from doing everything we can to make our community a safer, nicer place," Kellams said. 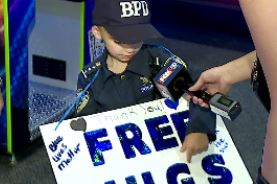 The National Night Out event went off without a hitch, as community members showed up to support the business and police officers. Jammie Ryan brought her two sons, including Gray, who is a huge fan of officers. He wore his own police outfit and a sign that said "Free Hugs."

"We support because it's the right thing to do," Ryan said.

The Monroe County Sheriff’s Office is investigating the vandalism.

WEST LAFAYETTE, Ind. — Purdue University officials announced on Wednesday that all students must get tested for the coronavirus before the start of the fall semester.

This applies to all West Lafayette-bound students who plan to move into residence halls and attend classes this August.

SEATTLE (AP) — Mary Kay Letourneau, a teacher who married her former sixth-grade student after she was convicted of raping him in a case that drew international headlines, has died. She was 58.

Her lawyer David Gehrke told multiple news outlets Letourneau died Tuesday of cancer. He did not immediately return an email from The Associated Press.