DELPHI, Ind. – The homicide case involving two Delphi teenagers has left the Carroll County community on edge as police search for a killer.

The investigation into the disappearance of 14-year-old Liberty German and 13-year-old Abigail Williams began around 5:30 p.m. on Monday, Feb. 13, when family members reported them missing.

A tip line has been set up for any information related to this case. All tipsters should call 844-459-5786. Information provided will be taken and followed up on by officers working the case. Tips can be submitted anonymously.

Here’s a timeline of the case as it has developed so far:

1 p.m. A family member drops off the girls at a trail near Monon High Bridge, an abandoned railroad bridge over Deer Creek.

5:30 p.m. The girls fail to show up at a predetermined location to be picked up by a family member. They’re reported missing.

Monday night: A large search effort involving volunteers and multiple law enforcement agencies gets underway. They scour the area in an attempt to find Liberty and Abigail. The search is called off due to darkness.

12 a.m. Carroll County Sheriff Tobe Leazenby says in a news release that there is no reason to suspect foul play or to believe the girls are in immediate danger. The biggest concern is exposure to the elements.

Noon: Searchers find two bodies about a half-mile away from the bridge.

2 p.m. During a news conference, authorities announce the discovery of the bodies but give no indication of their identities. They say for the first time that “foul play” is suspected in connection with the case.

4 p.m. Delphi Community Schools Superintendent Gregory Briles releases a statement saying that the bodies found in the afternoon are those of two “missing Delphi Community Middle School students” despite no confirmation from police.

Briles says grief counselors will be made available to students and staff. Briles later says school security will be stepped up. All after school activities at Delphi Community Middle School are canceled for the remainder of the week.

7 p.m. The Delphi United Methodist Church opens for a vigil.

8 a.m. Autopsies are conducted in Terre Haute on the bodies discovered during Tuesday’s search. Local authorities convene a meeting after the autopsies are complete.

10 a.m. Sgt. Kim Riley with Indiana State Police provides a brief update on the investigation. He says the autopsies are complete but declines to confirm the identities or discuss a suspect or person of interest in the case. He says police have received “hundreds of tips” from the community.

Riley advises parents to keep a close eye on their children and monitor their whereabouts.

3 p.m. Indiana State Police and the Carroll County Sheriff’s Department hold a news conference confirming that the bodies found Tuesday are those of Liberty and Abigail. They say the case is being investigated as a double homicide.

They say they don’t believe there’s any immediate danger to the community.

7 p.m. Indiana State Police release a photo of a man reportedly walking on the trail around the time of the girls’ disappearance. Police say they want to talk to the individual but stop short of calling him a suspect. 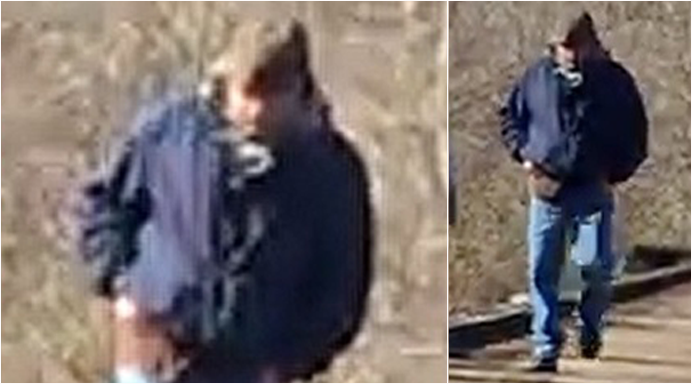 7:45 p.m. Indiana State Police serve a search warrant in connection with the case at a home in Delphi. No arrests were made.

4 p.m. A public visitation for the girls is held at Delphi Community High School.

12:30 p.m. Indiana State Police say the man photographed walking along trail around the time the girls’ disappearance is a suspect in their deaths.

Police say they’re conducting a statewide manhunt for the man seen in the photo and tell Hoosiers to continue to provide information via the hotline set up for tips in the case.

Carroll County Prosecutor Robert T. Ives cautions Delphi residents not to “harass, bother or accuse anyone,” especially those who live at a home that was the subject of a search warrant last week.

An official says the teens’ deaths could lead to security changes along the Monon High Bridge Trail. The changes could include the addition of security cameras.

10 a.m. Investigators hold a news conference to update status of investigation. Police reveal that Liberty German recorded video and audio of the suspect on her cell phone. ISP releases an audio recording of a man’s voice saying, “Down the hill.”

Authorities announce a $41,000 reward for information leading to an arrest in the teens’ killings.

4 p.m. Indiana State Police announce that the FBI has taken over the hotline for tips in the case.

Despite rumors to the contrary, Indiana State Police say they haven’t made any arrests in connection with the deaths of Liberty German and Abigail Williams. Police ask the public not to jump to conclusions or spread rumors on social media.

6 p.m. Grandparents of Abby Williams leave emotional note at police headquarters that expresses their gratitude for those investigating the case.

Investigators say they’re working with the FBI to build a profile of the suspect.

10 a.m. Mike Patty, Liberty German’s grandfather, speaks to media for first time since deaths of Libby and Abby. He thanks community for outpouring of support and says he believes tips will help solve the case.

Sgt. John Perrine from Indiana State Police says the case is “emotional for all of us” in reference to investigators. He reveals the reward has surpassed $224,000 and said police have received more than 11,000 tips.

12 p.m. Indiana State Police, the FBI and Carroll County sheriff’s deputies serve search warrant at home and property of Ron Logan, who owns the property where the bodies of Abby and Libby were found in February. Logan was taken into custody earlier this week on unrelated charges.

The victims’ families announced plans to build a sports complex with several softball fields in honor of the girls. A fundraising event will be held on July 15.

The first memorial softball tournament in honor of the teens is held. Proceeds from the tournament are going toward a new sports complex in their honor.

Indiana State Police released a sketch of the murder suspect.

Daniel Nations was arrested in Colorado for having expired Indiana license plates and police say he could be linked to the Delphi murders.

Police call Daniel Nations a person of interest in the Delphi murders investigation.

Police confirm two detectives were sent to Colorado to interview Nations. Authorities also confirm he was living homeless in Indiana at the time of the murders.

Daniel Nations’ wife speaks out and says her husband resembles the police sketch of the suspect, but not the man in the photo.

Indiana State Police and the Carroll County Sheriff’s Department announce the base of operations for the investigation is moving back to its original location in City Hall as the larger space at the REMC building was no longer needed.

Daniel Nations returns to Indiana on an unrelated warrant out of Johnson County for failing to register as a sex offender. He went to court the following day.

Abby and Libby’s families plan a candlelight vigil on the one-year anniversary of the investigation.

Indiana State Police release new information in the case, including a revised suspect sketch. The sketch shows a man who appears younger than the person seen in a sketch released earlier. Police believe he’s between the ages of 18 and 40 and may look younger than his true age.

State police also released additional video and audio taken from Libby German’s phone. Police believe the killer lives or works in Delphi and visits the area frequently. ISP Superintendent Doug Carter even suggested that police may have interviewed the individual in the course of their investigation.

RICHMOND, Va. (WRIC) - A team of researchers at Virginia Commonwealth University are working to develop a face mask that not only prevents the spread of COVID-19 but actually kills the virus.

The research team said that typically, the masks we're used to wearing can capture airborne viruses, but they do not kill the virus.

(NEXSTAR) - A prominent study from the UK looking at the effects of mixing COVID-19 vaccines found that participants saw a better immune response when they received a different second dose weeks after their first.

The findings from the University of Oxford-led Com-Cov study, headed by Professor Matthew Snape are encouraging for countries where vaccine supply may be more limited.

Duarte, a rookie shooting guard, eclipsed his 13.1-point scoring average with 14 in the first quarter, when the Pacers seized control with a 15-2 run. Indiana outscored New York in each of the first three quarters to lead 96-76 and mainatined a double-digit lead from midway through the second quarter until the final buzzer.

Indiana COVID-19 hospitalizations spike more than 20% in a week

Do you still need a booster shot if you just had COVID?