NEW YORK — President-elect Donald Trump on Saturday said the election is over and called the recount effort launched by the Green Party and joined by the Clinton campaign a “scam.”

“The people have spoken and the election is over, and as Hillary Clinton herself said on election night, in addition to her conceding by congratulating me, ‘We must accept this result and then look to the future,'” Trump said in a statement, which labeled the recount “ridiculous” in a headline.

Trump said he won Wisconsin, Michigan and Pennsylvanian by “large numbers” and noted his margin of more than 70,000 in Pennsylvania.

“This is a scam by the Green Party for an election that has already been conceded, and the results of this election should be respected instead of being challenged and abused, which is exactly what Jill Stein is doing,” Trump said, referring to the Green Party’s presidential nominee.

Read the full statement below: 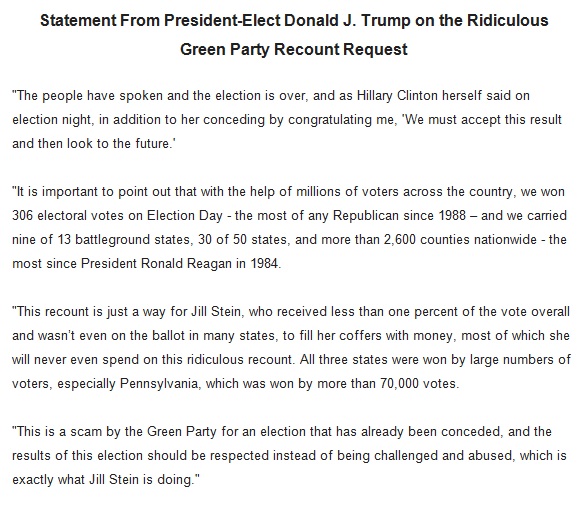 Southeast side death no longer ruled a stabbing

Southeast side death no longer ruled a stabbing

1 man dead after shooting on near northeast side