INDIANAPOLIS, Ind. – Local tennis coach Matt Moore’s eyesight has baffled the doctors who’ve treated him in the last few years. And while it’s cost him much of his vision, what he’s gained is nothing short of miraculous.

“I’ve dealt with some adversities in life but nothing like this,” Matt Moore said. 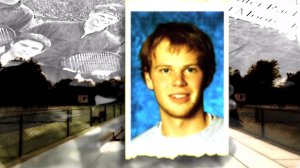 Nearly two decades ago, Matt Moore was a standout player at the storied tennis program at Carmel High School. He was a champion on a team full of great players.

Matt went on to play tennis at Hanover College where he studied social work. He went on to teach at Ball State University and tennis stayed in his life.

“It’s meant so much to me and the development of who I am as a person and the connections and friendships along the way,” Moore said. “There’s individual elements, there’s still a sense of team that comes with it.”

Matt translated those elements he learned as a player, to his time as a coach. First at Zionsville High School from 2009 to 2017, then at Butler University for two years.

“In a sport like tennis you’re trying to teach individuals how to think critically you’re trying to teach them about technique and tactic, but on the reverse end of that you’re teaching them the values about taking care of their body physically and also preparing for what life is going to throw at you from a mental aspect,” Moore said.

Life threw something at Matt midway through 2015. Something he could never have seen coming.

Matt was having a conversation with a colleague when he noticed something strange.

“I looked at her and something’s not right, I see about 200 to 300 black floaters streaming right through my eye. Almost like a rain shower of floaters in the eye, where you couldn’t count them, there’s nothing to get rid of it. Look in one direction, look in the other it wasn’t going to change it,” Moore said.

A trip to the optometrist showed a tear in Matt’s retina. Later it detached. It’s more common in older people. Matt was in his early 30’s. He felt good about his odds.

But what followed, scared him.

“That’s when you start to question man what’s going on here, this is abnormal and it’s got doctors baffled,” Moore said.

Matt went through eight surgeries on his left eye. Each time, another detachment.

“Most of my procedures required that I lie face down 20 hours a day,” Moore said. “It’s tough…a lot of alone, isolated time that you’re sitting there left to ponder the ‘what if’s’ in the world.”

Matt’s doctor says his ruptures were brought about extreme near-sightedness. 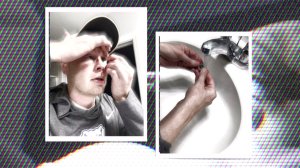 Eventually, Matt made the decision to have his eye removed. A surgeon implanted a prosthetic, leaving Matt with one eye.

“Then you’re thinking, ‘God I hope nothing goes wrong with this one,’” Moore said.

His doctors at the Midwest Eye Institute recommended he stop coaching, fearing an impact that would forever blind him.

“It was devastating, I mean, think about it, your professional career, your family life, the things you give up, how your life would change,” Allen said.

Then, a year later, the unthinkable happened: a detachment in his healthy eye.

“I went several weeks, well over a month, with no vision at all, this eye had been removed, this eye had a 90% gas bubble, I couldn’t see anything,” Moore said.

And here’s where our story turns. With the agony and uncertainty, Matt sought counseling to deal with the emotional and psychological trauma. And as he was learning how to face the unknown, he made a life-changing realization.

“I drew the short straw I supposed at first, later you find out that sometimes these life challenges put you in a better position to have appreciation or respect for the things that are going on your life,” Moore said. “One thing I tried to keep perspective on, is even if you lose your vision it’s not life-threatening – is it life-altering? Absolutely this whole experience is life-altering.” 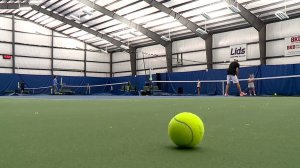 He also learned to lean on the people whose lives he touched. In October, some of his former players came out for a tournament in his honor.

“He wasn’t just a tennis coach to me, that wouldn’t do him justice,” Nina Bertino said.

Nina Bertino played for Coach Moore her sophomore and junior years at Butler. When Nina learned about his condition, she organized an event at Pearson Automotive Tennis Center.

“His life is all about serving other people,” Bertino said. “He had such an impact on me, and the minute I found out he was struggling, I wanted to make a difference. He understood how to respond to my negativity, pouting, all my emotions on court, he always knew the comforting words to say.

Now that comforting goes both ways.

“You look for pick me ups and things that lift your spirit,” Moore said, “all these players came out, it’s phenomenal. “

Matt’s in a better place now. He’s recovering from another surgery and the vision in his right eye is stable. He and wife Lindsay and their three kids, Brooklyn, Bronson and Maverick, and even visiting exchange student, Matilda are in the present.

“It did take a toll on everyone, but we also tried for the kids to keep their lives as normal as possible,” Lindsay Moore said.

And Matt, Dr. Moore, already a published author on sports social work has a few lessons worth sharing in an ongoing blog he wrote called “Flashes of Light from Heaven.”

For now, Matt is back at work teaching full time. He’s able to drive during the day.

As he continues his recovery, he says he hopes to inspire not just athletes, but anyone who’s living with a challenge they’re trying to overcome.

MIAMI (AP) — The National Hurricane Center reports that Tropical Storm Zeta has formed off the coast of Cuba near the Yucatan Peninsula.

According to a Colorado State University hurricane researcher, it is the earliest named 27th Atlantic storm recorded. NHC says 2005 still holds the record for the most number of named storms in a season at 28. One more storm this year and the record is tied.

INDIANAPOLIS -- After a summer of give-and-take negotiations with both the mayor's office and the City-County Council, IMPD has published a new General Order establishing a Use of Force Board to review every time an officer pulls a firearm, fires a taser, applies a baton strike or uses his or her hands to enforce the law in Indianapolis.

General Order 1.31 is the final piece of the puzzle to update the police department’s policies on Use of Force and how to determine whether the officer was right or wrong.

KABUL, Afghanistan (AP) — Afghanistan claimed Sunday it killed a top al-Qaida propagandist on an FBI most-wanted list during an operation in the country's east, showing the militant group's continued presence there as U.S. forces work to withdraw from America's longest-running war amid continued bloodshed.

The reported death of Husam Abd al-Rauf, also known by the nom de guerre Abu Muhsin al-Masri, follows weeks of violence, including a suicide bombing by the Islamic State group Saturday at an education center near Kabul that killed 24 people. Meanwhile, the Afghan government continues to fight Taliban militants even as peace talks in Qatar between the two sides take place for the first time.

Fear and anxiety spike in COVID-19 hot spots across US

Carmel police search for man who robbed resident at gunpoint

Police search for man after attempted child abduction in Martinsville

Pedestrian struck, killed during 4-car crash on Indy’s near northeast side

Pence to keep up travel despite contact with infected aides

Pedestrian struck, killed during 4-car crash on Indy’s near northeast side

Fear and anxiety spike in COVID-19 hot spots across US