Indianapolis, Ind. – We continue our Your Town Friday March Madness tour at Butler University in the historic Butler-Tarkington neighborhood.

Butler was founded by abolitionist Ovid Butler in 1855. The original campus was at 13th and College, hence the name College Avenue. 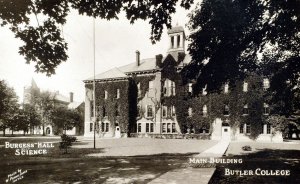 It moved to Irvington in 1875 and to the current location about five miles from downtown Indianapolis in 1928.

Today there are about 4,700 undergraduates.

For my first trip to Hinkle Fieldhouse on Butler’s campus, I had the most charming tour guide! As usual, Michael Kaltenmark knows it’s not him.

“I’m usually invisible and that’s fine!” said Kaltenmark, Director of External Relations. “It’s all about the dog and yes, I’ve got a little celebrity around my feet.” 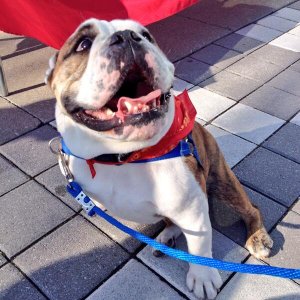 “We describe him as spirited!” said Kaltenmark, who also takes the bulldog home at night.

There have been many before Trip, since 1909 in fact, but maybe none as dear to people’s hearts as Butler Blue Two. He passed away in 2013 after rising to fame when the men’s basketball team made unexpected runs to the Final Four.

“It’s no longer, hey look at that bulldog! But instead it’s look at the Butler bulldog.”

Trip is seven now and loves to surprise new Bulldogs with acceptance letters. The school surprises up to 100 new students each year.

“Butler wasn’t really on my radar, ” said Junior Hannah Bolander. “But my aunt lives close and told me to check it and I just fell in love with the campus. I love that it’s small and it’s beautiful.”

And it really is beautiful.

Butler President James Danko led students on the pristine campuses of Dartmouth and Villanova, yet remembers how impressed he was with Butler’s 300-plus acre campus on his first visit.

“But it’s what happening inside those buildings that really counts,” points out President Danko.

Which brings us back to Bolander. When she arrived on campus as a freshman, she heard about life-changing research a psychology professor was doing. Bolander had done a similar project in high school in Muncie. So she reached out to “Dr. L” and she told her to join their team.

“Dr. L is my favorite person!” said Bolander. “I love her so much. She’s definitely one of the best parts of my Butler experience.”

“That was a really nice thing to hear her say,” said Dr. Lineweaver. “It caught me by surprise, but it was wonderful. When I was at Butler in 1991 I always said, gosh I would really like to work at a place like Butler when I grow up.”

She was working as a neuro-psychologist at the Cleveland Clinic when she heard about an opening and got her dream job.

She and Butler music professor Tim Brimmer think they might’ve found a way to help people living with Alzheimer’s.

“Who would have thought the right drug could be music? A non-pharmacological intervention?” asked Brimmer.

They and their students go to local nursing homes, playing personalized playlists for the people living there. They choose songs that meant something to them during their younger days and watch what happens.

“Their head rises,” said Brimmer. “Their torso follows. They start to move back and forth. They animate. They start to vocalize. They grin. They smile. They might close their eyes. Can we reduce pain? Can we reduce loneliness? Can we bring back memories that are so priceless?”

Brimmer and Dr. Lineweaver say this teaches students like Bolander the value of science in the real world, and also a lot about living in the moment.

“This is about making a difference at that time and at that place and even if they don’t remember you next week when you come back, you have still impacted their lives,” said Dr. Lineweaver.

It’s that intimate learning environment President Danko is proud of, pointing out the 12:1 student to faculty ratio.

He and his wife Bethanie even invite students over for dinner.

“We do that quite a bit!” said President Danko. “In fact, in the past three or four weeks we’ve had two or three gatherings at my house. We have felt at home right from the beginning. Maybe if you were born and raised and lived here all your life, you may not recognize what a great community it is!”

But just like Kaltenmark, President Danko knows who rules campus.

“I’ve been at many events where people are talking to me and they seem to be listening and then when Trip walks in and everybody makes a beeline over for our mascot!”

Butler is on the verge of opening a new $50 million business school and the neat thing about this building is there will be as much space for gathering as there is for classrooms. That way, local nonprofits and businesses can also use the building to meet and interact with students. 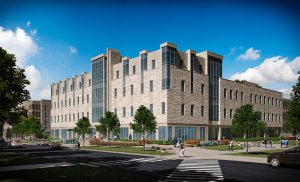 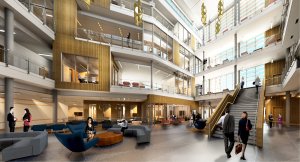 If you’d like Lindy to check our your town for Your Town Friday, click here to let her know!

Most popular 4th of July food by state

1 person is dead after early morning shooting on …

‘All they did was come out, put two cones up’: Dangerous …

Man dead following hit and run on east side

Bill may give communities more say over fireworks …

Need a laugh today? Watch this