Frankfort, Ind - This week we're heading about 50 miles north of Indianapolis to Frankfort, where some people felt like there was tension in the town and they wanted to replace it with some fun.

Early last year,  Larry Laughner approached Tammy Danner and some others with his idea. Before long, they formed a group called "F.U.N." and it stands for Frankfort's Unified Neighborhoods. 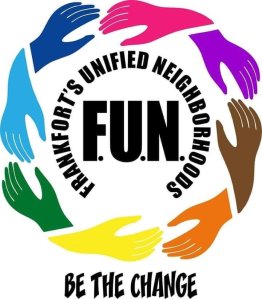 "Nothing comes out of tax dollars," said Danner. "It's all done by volunteers and the community is very, very receptive to this."

This week they're getting ready for the Jack O' Lantern Jamboree. Last year at the first one, they expected maybe one or two hundred people at the Clinton County Fairgrounds. They got 1,500 people. 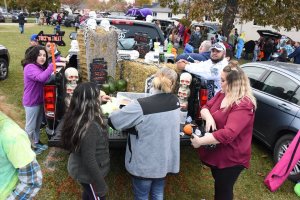 "I saw on Facebook, hey we're going to do this dance and if you want to be involved in planning it, come on down, " said Thresa Adams. "And I thought, I'm going to do that!"

Before long, Adams was literally diving in. 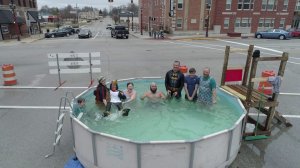 "I am a single mom of three kids and I wanted something me and my kids could do together. And I could meet more people. As a single mom I pretty much just work all the time."

Her spare time is precious, and she spent it taking the lead on this year's Jamboree.

She's planned a Trunk and Treat, hayrides, fire pits and s'mores and more. The Jamboree even kicks off with a parade.

"Anybody in town is welcome to come and jump into the parade!" said Adams. "If your kid has a fun costume, bring them down and let them walk."

"I like giving back to my community," said continued. "I like seeing the smiles on people's faces."

"I couldn't afford to do a whole lot with my kids and now I can do something with them at least once a month."

Is there still work to be done in the community? Of course. But their F.U.N. approach is doing something.

"We've really done it," said Danner. "We're really proud of what we've done for our community."

The Jack O'Lantern Jamboree starts at 3 p.m. Saturday October 26th with a parade and it lasts until 8 p.m. at the Clinton County Fairgrounds. Again, it's all free thanks to about 50 sponsors.

Their goal is one event a month and they hope people in other towns will think about doing something similar.

PHILADELPHIA (AP) — There are the new dead. And then there are the bodies waiting in overcrowded mortuaries to be buried as cities struggle to meet demand and families wrestle with rules on social distancing that make the usual funeral rituals impossible.

Med Alliance Group, a medical distributor in Illinois, is besieged by calls and emails from cities around the country. Each asks the same thing: Send more refrigerated trailers so that we can handle a situation we never could have imagined.

What sounds like an organized-crime thriller is now the new reality for governors desperately trying to find the medical equipment their states need in the throes of a pandemic. With the federal stockpile dwindling fast, and the Trump administration limiting access to what’s left, state leaders are going to extraordinary measures on their own to secure faces masks, ventilators, gloves and other equipment essential to fighting the outbreak.

NEW YORK (AP) — Casper ter Kuile lights a candle in front of his computer screen. And then the music begins.

All around the world, linked by video, more than 100 people sing “Come, Come Whoever You Are,” lyrics adapted from a poem by Rumi, the 13th century Sufi mystic. Then, laughing together, “Kookaburra,” the Australian nursery rhyme. And then, in Hebrew, “Hinei Matov.”

One man killed & another hospitalized in late night motel shooting