(July 29, 2015) — In a post made to his verified Facebook page Wednesday morning, New England Patriots quarterback Tom Brady says he is “very disappointed” that the NFL upheld his four-game suspension over the “Deflategate” scandal. “I did nothing wrong, and no one in the Patriots organization did either.”

The post says the NFL’s narrative about the disposal of his cell phone — which the NFL wanted to examine as part of an investigation — is inaccurate, and he indicated he will continue to fight the suspension. “I will not allow my unfair discipline to become a precedent for other NFL players without a fight,” the post reads. 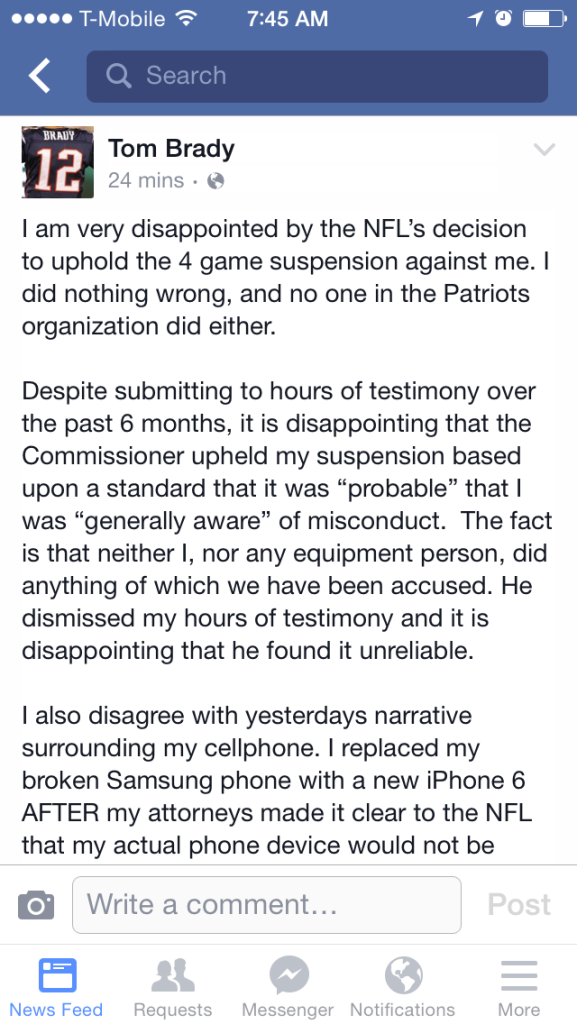 The National Football League decided to uphold a four-game suspension of New England Patriots star quarterback Tom Brady for his role in the football tampering scandal known as “Deflategate,” the league announced in a news release Tuesday.

Commissioner Roger Goodell, in affirming the suspension he handed down in May, said new information about the destruction of Brady’s cell phone showed the four-time Super Bowl champion “sought to hide evidence of his own participation in the underlying scheme to alter the footballs.”

“The appeal process was a sham, resulting in the commissioner rubber-stamping his own decision,” Yee said.

The NFL Players Association said it would file an appeal, presumably in federal court, on Brady’s behalf.

“The negotiations never got that far,” Atallah told Nichols, adding that the players’ union made an initial offer to the league.

The proposed deal was that the four-game suspension be eliminated, but Brady would pay a fine for failing to cooperate with the investigation.

Atallah said league officials told them the NFL wouldn’t even discuss anything unless Brady admitted his guilt.

Brady has denied he knew of any plan to alter footballs so that they would be underinflated, which would have made the balls easier to grip.

The NFL didn’t immediately respond to CNN’s request for comment on the negotiations.

Saga of a cell phone

On March 6, Brady was interviewed by investigators hired by the NFL. The league says that it was informed months later that on or about that date, Brady told his assistant to destroy his cell phone that he had used since early November.

That was a period that included the AFC Championship Game and the initial weeks of the subsequent investigation into the allegations of tampering with the footballs.

The investigators, according to Goodell’s final decision, had asked Brady’s lawyers for the cell phone several times, on and before February 28.

The destruction of the cell phone wasn’t disclosed at Brady’s interview with investigators when he was asked for it again.

It wasn’t until June 18, almost four months after investigators had requested its data from Brady and five days before an appeals hearing, that Brady’s lawyers informed the league. During the 10-hour long appeals hearing at NFL headquarters in New York, Brady said the phone had been destroyed because that was his usual practice when he got a new mobile phone.

“We presented the commissioner with an unprecedented amount of electronic data, all of which is incontrovertible,” Yee said. “I do not think that any private citizen would have agreed to provide anyone with the amount of information that Tom was willing to reveal to the commissioner.”

He said electronic information was ignored by Goodell, and “we don’t know why.”

The quarterback began using a new phone on March 6, leading the NFL to believe that the previous one had been destroyed that day.

Brady’s lawyers also gave the league a letter from Brady’s cell phone provider that the texts could no longer be retrieved.

Reacting to the decision to uphold the suspension, the NFL players’ union said on its website: “The fact that the NFL would resort to basing a suspension on a smoke screen of irrelevant text messages instead of admitting that they have all of the phone records they asked for is a new low, even for them, but it does nothing to correct their errors.”

Goodell failed to give Brady due process, the statement said.

Attalah clarified that Brady and his lawyers gave the NFL records of the numbers texted from Brady’s phone. Those documents didn’t show the content of the texts, he said. 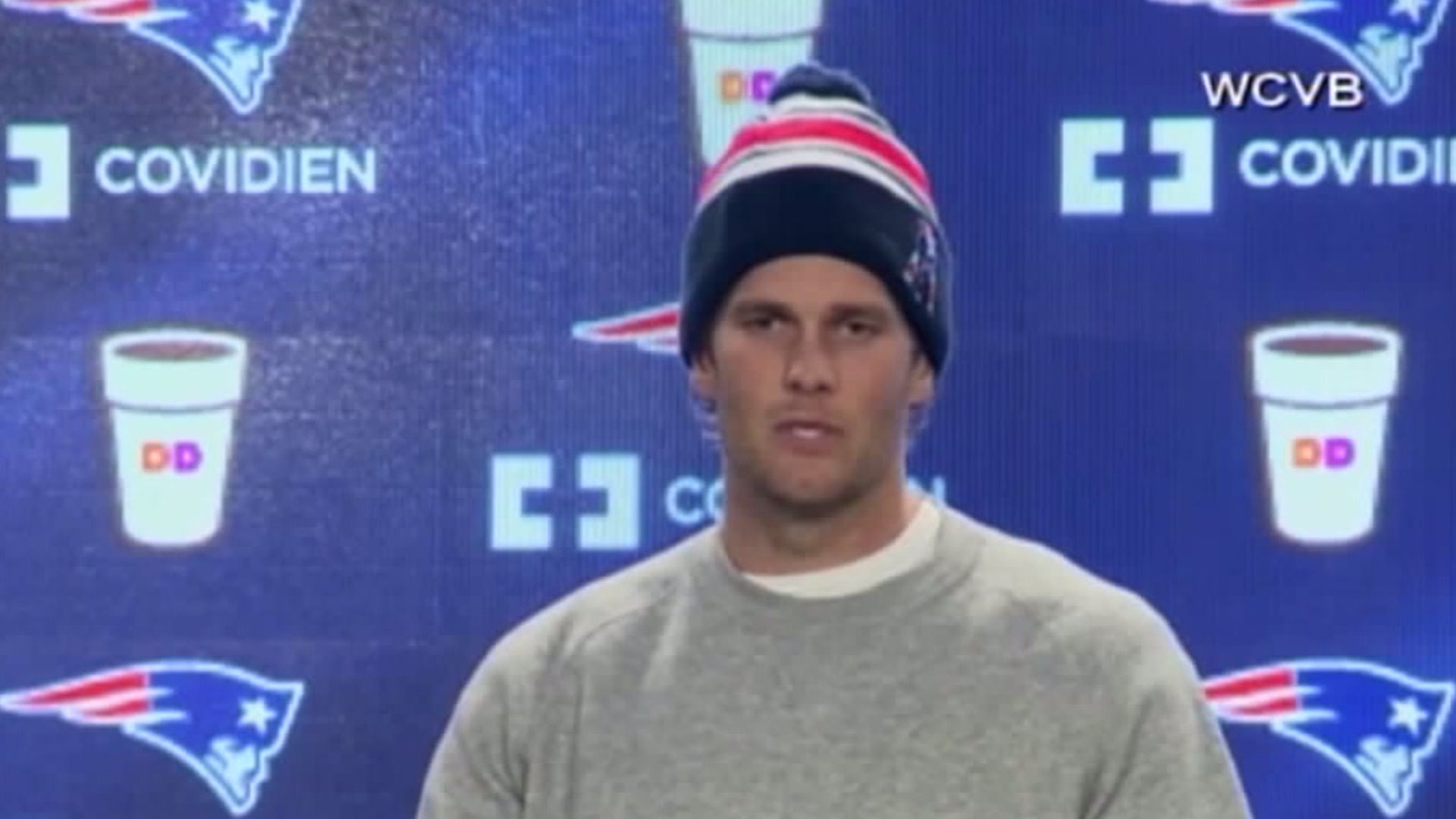 Goodell’s decision is the latest chapter in a controversy that started when the New England Patriots were accused of using underinflated footballs to gain a competitive advantage in January’s AFC championship victory over the Indianapolis Colts.

Brady denied involvement, but the NFL suspended him four games without pay in May. Brady appealed, setting up the decision by Goodell.

The Super Bowl-winning Patriots were punished, too. The team was fined $1 million and will forfeit its first-round selection in the 2016 NFL Draft and its fourth-round pick in the 2017 draft.

Lawyer Ted Wells, who led the investigation, said Brady probably had at least a general knowledge about how the balls were deflated.

The report said the likely perpetrators were equipment assistant John Jastremski and the man who carried the balls from the officials’ locker room to the field, Jim McNally. The Patriots have suspended both employees indefinitely.

Brady, one of the best-known and highest-paid athletes in the United States, has the option of filing a lawsuit and taking the fight to the court system.

In what appears to be a preemptive move, the NFL filed a complaint against the National Football League Players Association in federal court in New York on Tuesday, asking for a judge to confirm the decision to uphold Brady’s suspension.

Minnesota Vikings running back Adrian Peterson, suspended last year after a child abuse case in Texas, filed suit and won his case — filed on his behalf by the players’ union — in February. He was reinstated by the NFL in April. He has been participating in training camp, but the NFL’s appeal of the decision to overturn his suspension is pending.

The league suspended the 37-year-old football star indefinitely in November over allegations that last year he disciplined his son, who was 4 at the time, too harshly with a “switch,” or thin stick.

If he accepts the suspension, Brady will sit out games against the Pittsburgh Steelers, Buffalo Bills, Jacksonville Jaguars and Dallas Cowboys. He would return October 18 in a game at Indianapolis.

INDIANAPOLIS -- The Colts host the New York Jets Sunday as Indianapolis tries to get above .500 on the season.

On this Thursday episode of the Colts Blue Zone Podcast, Mike Chappell, Dave Griffiths and producer Joe Hopkins begin the show by running through the news of the week.

Purdue sophomore receiver Rondale Moore has decided to rejoin the Boilermakers for the coming season.

Askew out, Castroneves in for Harvest GP

Askew is not medically cleared to race.