INDIANAPOLIS, Ind. – A Fairland boy born with an extremely rare gene disease was able to become a member of the permanent member of the Butler Bulldog family on Thursday.

7-year-old Seth Dennison has been battling complications from having deletion of his second chromosome since he was 1. The disease has left him with autism and many long nights in and out of the hospital.

She set up the Facebook page called “Prayers for Sethy Boy” to document and share updates to his difficult 2017.

Dennison went into septic shock because his organ’s failed during his stay. Doctors were able to save him and now Seth is ready to spend 2018 cheering on his Bulldogs.

How the Dennison’s got connected with Butler starts with former coach Thad Matta.

Matta has worked with national foundation “Friends of Jaclyn” for some time and told current coach and his former player LaVall Jordan about its impact.

The foundation aims to improving the quality of life of children living with childhood cancers and diseases by pairing them with sports teams.

During a trip to Disney World last year provided by the Make a Wish Foundation, the Dennison’s were contacted by Friends of Jaclyn to be able to potentially do something special for Seth here in Indiana.

Butler told the foundation they’d love to put on a special day for Seth and days later, Dennison had a press conference date set to become an official member of the Bulldogs.

Seth, his parents and siblings spent all day Thursday at Butler.

“All the players were so nice and made Seth and his siblings feel like members of the team.” Jenn said.

The letter, pictured below, says Seth is responsible for attending home games and practices as schedule permits, have fun and cheer for the Bulldogs!

Seth will be honored at halftime during Saturday’s game vs. Seton Hall. Butler looks move to 3-1 in the Big East with a victory. 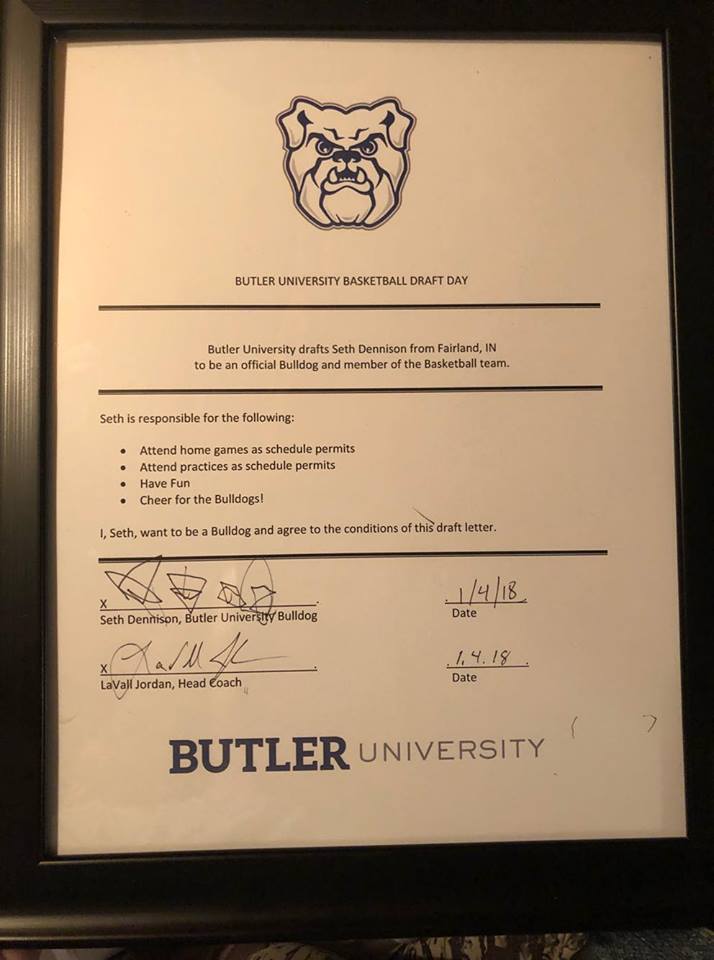 Watch a video from Butler of the special day below:

Butler signs 7-year-old Seth Dennison to an NLI through the @fojfoundation. Learn more in this episode of Inside Butler Basketball connected by Smithville Fiber. pic.twitter.com/2OX4OB1PuF

INDIANAPOLIS – Center Grove High School’s Bryce Eblin is one of the best high school baseball players in the state.

During his sophomore and junior seasons with the Trojans, Eblin totaled 73 hits, 54 RBIs, and 77 runs over 54 games.

The NCAA released a long and detailed plan Friday to help schools bring athletes back to campus during a pandemic.

The Resocialization of Collegiate Sports: Action Plan Considerations was announced as schools across the country prepare for the return of football players as early as June 8.

The Power Five conference commissioners are asking Congress to move forward with federal legislation regarding compensation for college athletes.

The commissioners of the Atlantic Coast Conference, Big Ten, Big 12, Pac-12 and Southeastern Conference sent a letter dated May 23 to congressional leaders. The Associated Press obtained a copy of the letter Friday. Stadium, the online sports network, first reported on the letter.

One dead after neighbors rescue 2 kids from house fire

One dead after neighbors rescue 2 kids from house fire