IndyCar unveiled its schedule for the 2019 season, a list that includes 17 events, a new race and a new finale.

Circuit of the Americas (COTA) in Austin, Texas, will debut in the IndyCar Series on Sunday, March 24, as the second race of the season. At more than three miles, COTA is the second-longest circuit on the 2019 slate, trailing only Road America (4.048 miles).

The green flag will drop on the series on Sunday, March 10, in St. Petersburg, Florida. It’s the ninth consecutive year IndyCar has started its season in the Gulf Coast city. The series will wrap up the season at WeatherTech Raceway Laguna Seca near Monterey, California.

This year marks the beginning of a new TV deal involving IndyCar and NBC Sports Group. Eight of the 2019 races will appear on network television as part of the agreement, including the Indianapolis 500. Nine races will air on NBCSN. 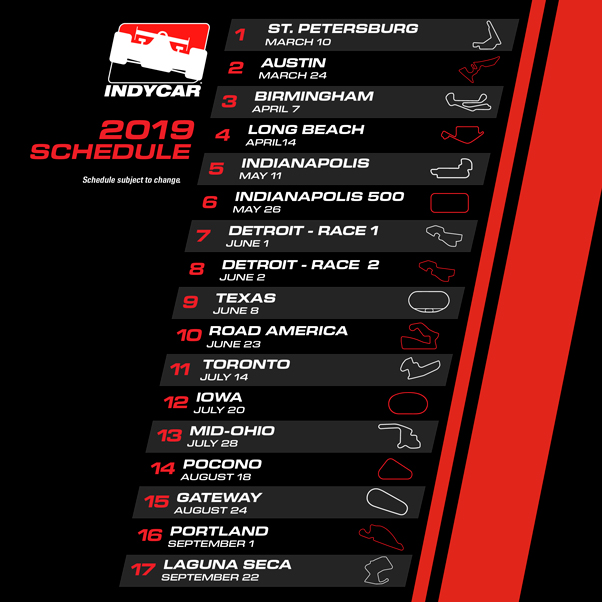 FORT WORTH, Texas (AP) — IndyCar packed every bit of its delayed season-opening event into one long, hot day in Texas without any fans in the stands. Scott Dixon was the fastest for most of it at a place he knows well.

Dixon, a five-time IndyCar champion, took the checkered flag at dusk Saturday for his fourth win at the 1 1/2-mile, high-banked oval, where drivers had also practiced and qualified earlier in the day. The 39-year-old New Zealander raced to his 47th career victory and matched A.J. Foyt's record of 18 seasons with a win.

FORT WORTH, Texas (AP) — When defending IndyCar champion Josef Newgarden crossed the start-finish line to get the pole for the long-delayed season opener, there was no reaction from a crowd. There was, however, a quick warning over the radio to his Team Penske crew to avoid any celebratory high-fives.

Newgarden, last to make a qualifying run on a steamy Saturday in Texas, had a two-lap average of 215.740 mph in the No. 1 Chevrolet. The race later that night was set to end an all-in-one-day event to start the season.

INDIANAPOLIS - There's no denying it's been an emotional week, one that's hit pretty hard on the local sports scene.

Players and management are seeing and feeling the effects of social injustice, including Pacers' president Kevin Pritchard.

‘It did not happen’: Family, attorneys say Dreasjon Reed didn’t shoot at police before deadly encounter