April 11, 1965 – It was 54 years ago today the deadliest tornado outbreak in state history occurred. Sadly, 137 Hoosiers died as 10 tornadoes crossed 18 counties in only a matter of a few hours.

The historical image of the twin F4 tornadoes that struck the Midway Trailer Park near Dunlap was photographed by Elkhart Truth photographer Paul Huffman. 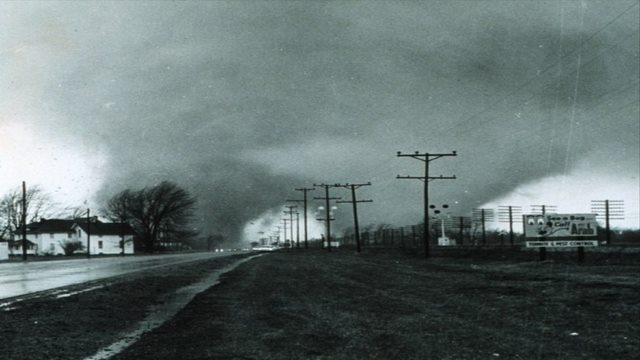 An 800-yard-wide tornado would kill 25 near Kokomo. 84 people would die in Elkhart County alone.

Weather radar was sparse in 1965 and the then U.S. Weather Bureau relied on information from Chicago and its radar.  The tornado reports were so numerous that for the first and only time in U.S. history, a blanket tornado warning was issued. 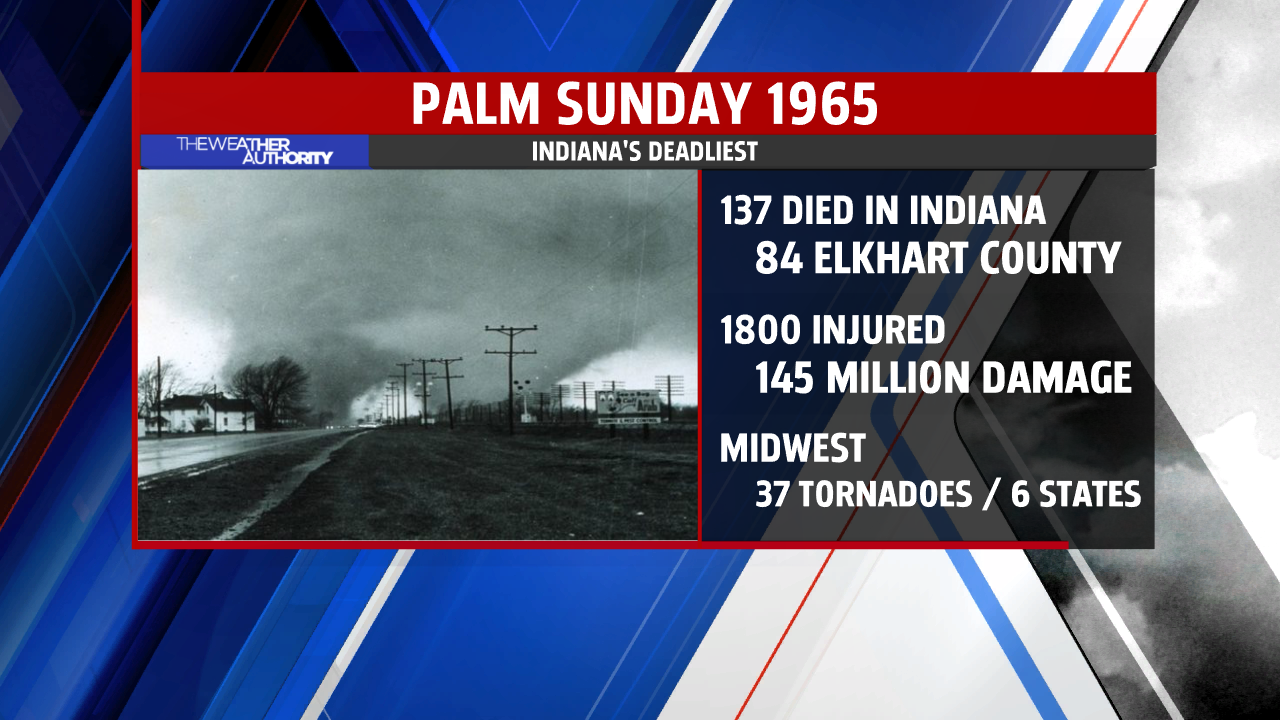 I was honored to return to Elkhart, Dunlap and Goshen four years ago, marking the 50th anniversary of those dreadful tornadoes.

So many Hoosier families were affected and I had a chance to hear more of their stories and recount not only the night but the events after the storms. The healing, scarring and heroism that followed.

The Elkhart County Historical Museum has an exhibit of photos documenting the day – a must see.

It was a pleasure and honor meeting Betty Huffman – wife of over 65 years to now late photographer of the Elkhart Truth – Paul Huffman.   He snapped the most infamous photo taken of the twin F4 tornadoes near Dunlap that now hangs in the Smithsonian. 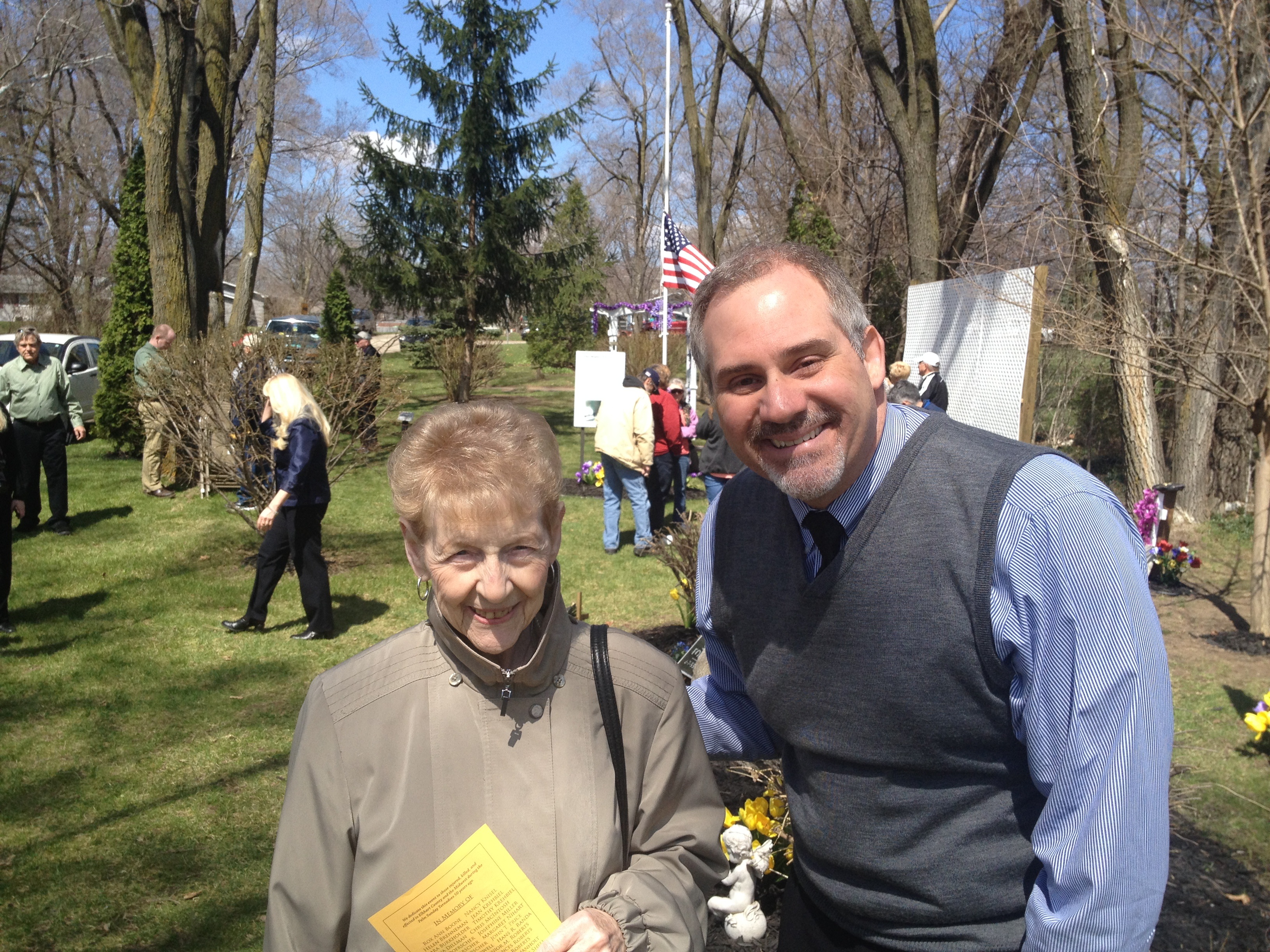 So much work went into the dedication that Sunday – a huge THANK YOU to all especially Debbie Forsythe – Watters whose home was destroyed and where the location of the Palm Sunday memorial has been erected.

I’m posting some of the pictures from that weekend and encourage you to visit the Palm Sunday Facebook page for more 1965 Palm Sunday Tornado Memorial. 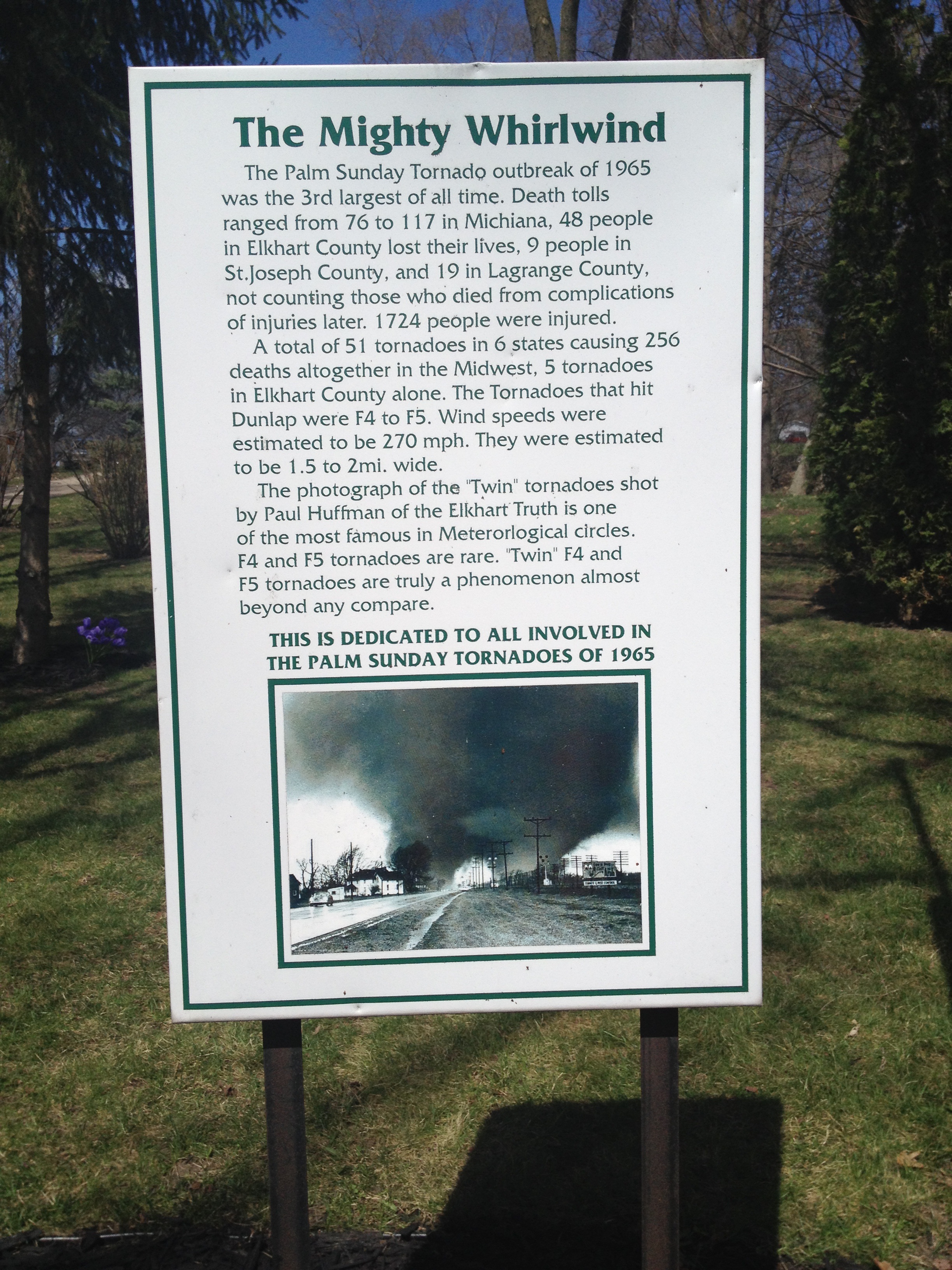 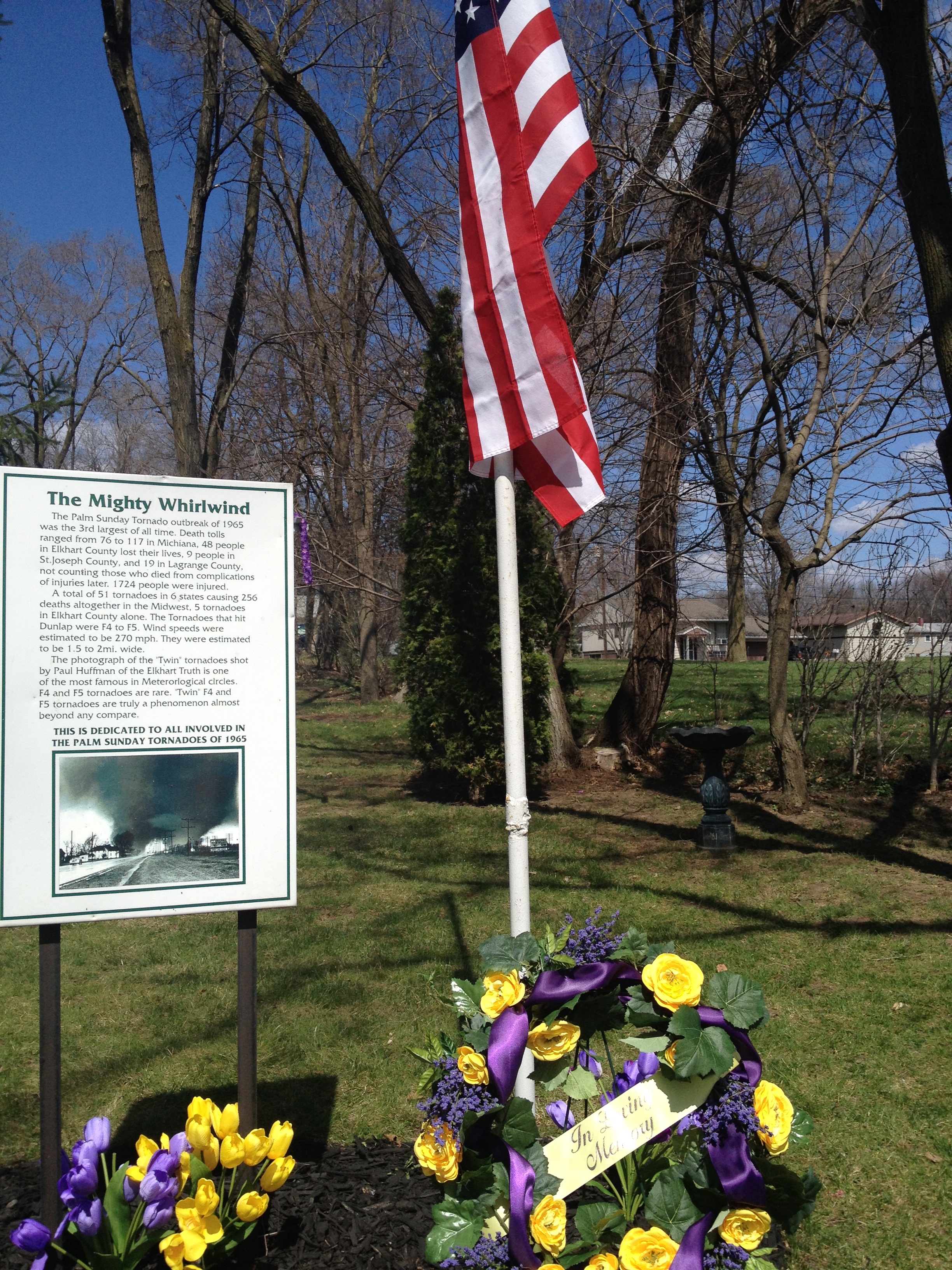 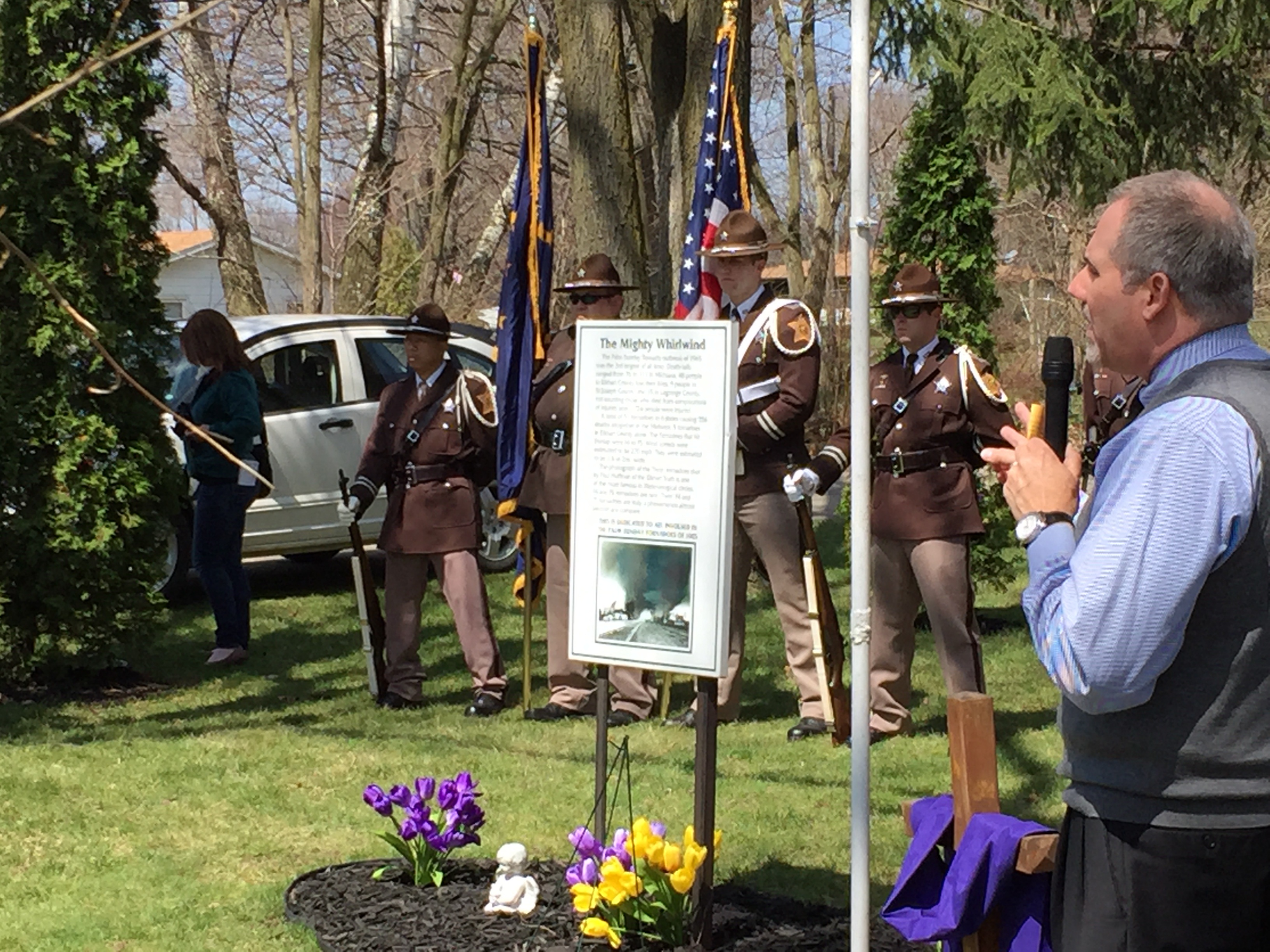 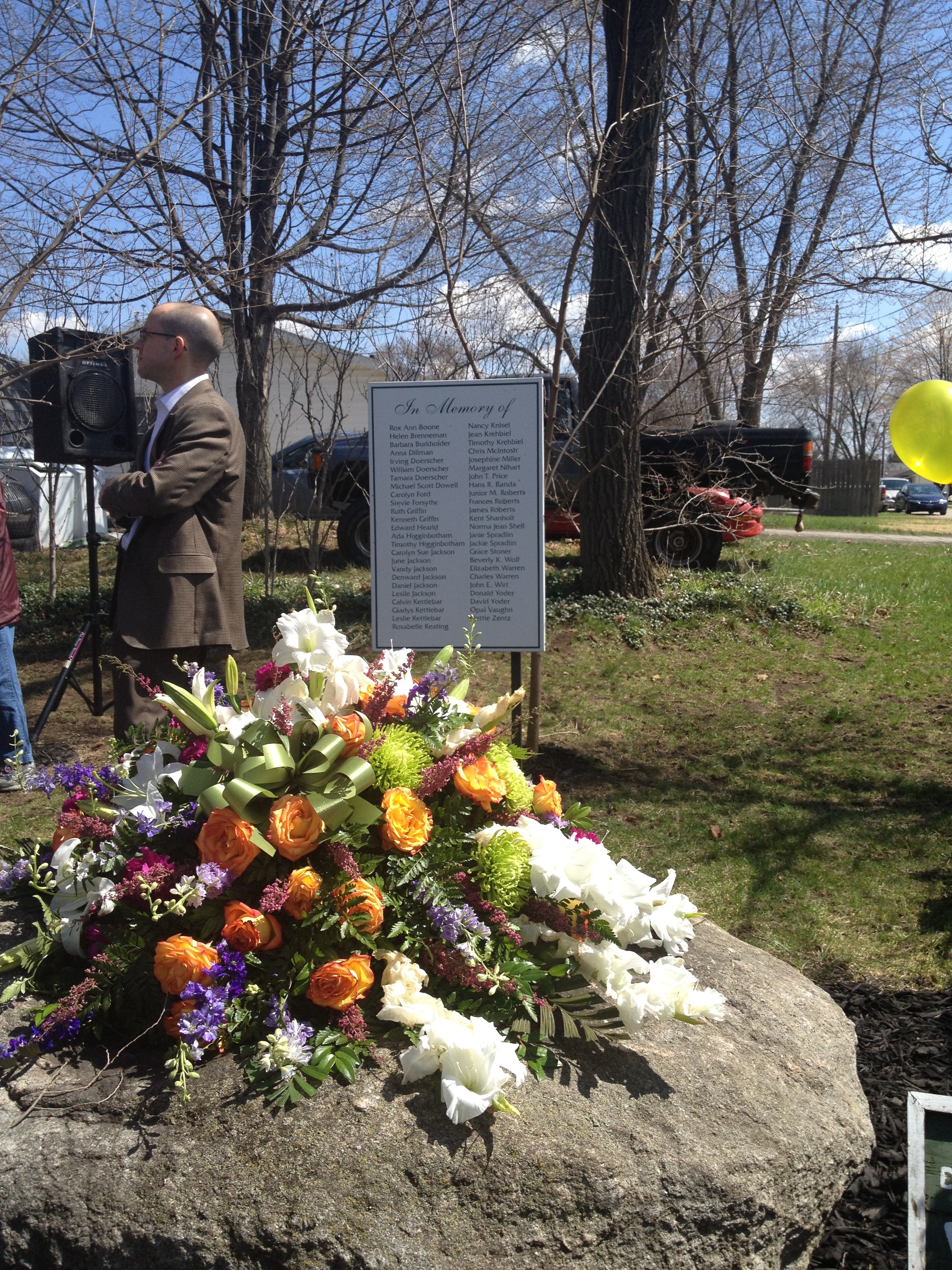 INDIANAPOLIS — The Indianapolis Department of Public Works is activating some of its Snow Force Drivers ahead of light snow that may create some slick conditions.

INDIANAPOLIS -- The Indianapolis Metropolitan Police Department has three people in custody after a robbery ended in a shooting early Saturday morning.

The IMPD said the arrests are in connection with a robbery near the intersection of East 21st Street and North Shadeland Avenue just before 3 a.m. Saturday. When officers arrived, they found a man suffering from injuries consistent with a gunshot wound. He was taken to the hospital in serious condition.

Headed to disaster? US, Russia harden stances in talks

WASHINGTON (AP) — The failure of last week’s high-stakes diplomatic meetings to resolve escalating tensions over Ukraine has put Russia, the United States and its European allies in uncharted post-Cold War territory, posing significant challenges for the main players to avoid an outright and potentially disastrous confrontation.

Unlike previous disagreements that have arisen since the collapse of the Soviet Union, the current Ukraine crisis and seemingly insurmountable differences between Washington and Moscow carry real risks of debilitating economic warfare and military conflict that are exacerbated by the dangers of miscalculation and overreaction.

COVID deaths and cases are rising again at US nursing homes

After Biden’s first year, the virus and disunity rage on

By the numbers: Stats that tell story of Biden’s first year

Was it COVID, cold or flu? Here’s how you can tell

Was it COVID, cold or flu? Here’s how you can tell

Headed to disaster? US, Russia harden stances in talks

COVID deaths and cases are rising again at US nursing homes