The first area-wide snowfall is underway in central Indiana Monday afternoon and evening. As temperatures continue to fall, the light rain turned to snow in Indianapolis just before 2 pm. By 4 p.m., a half inch of snow was reported at the airport, marking the first measured snow since March 30. 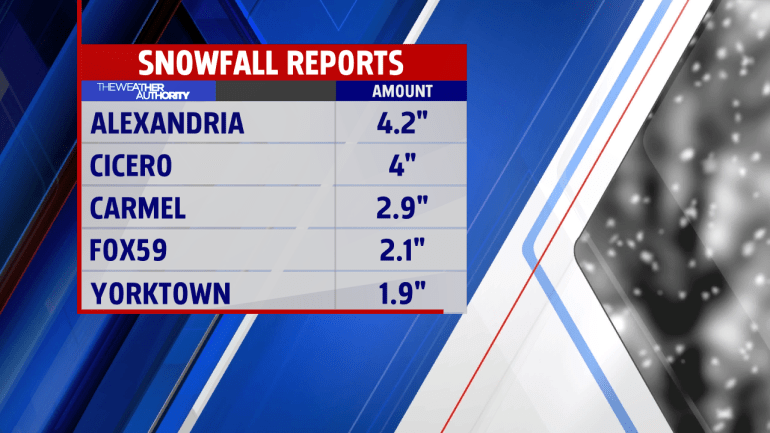 A Winter Weather Advisory is in effect overnight and snow ends and bitter cold takes hold. 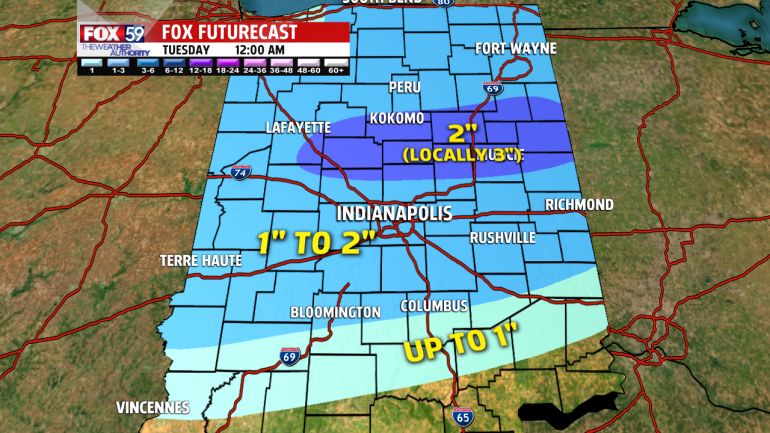 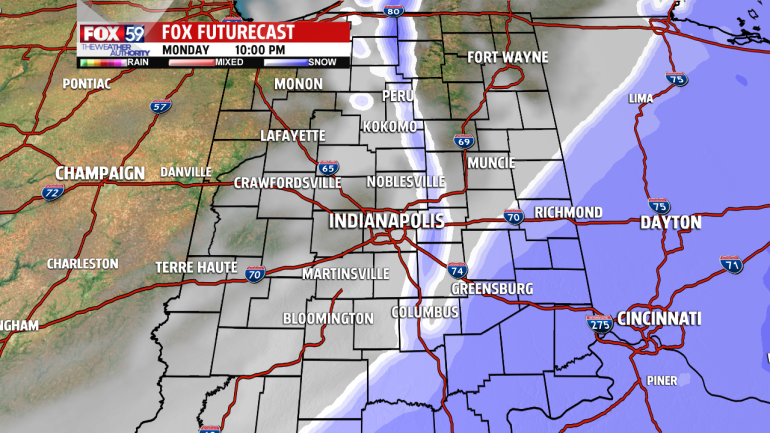 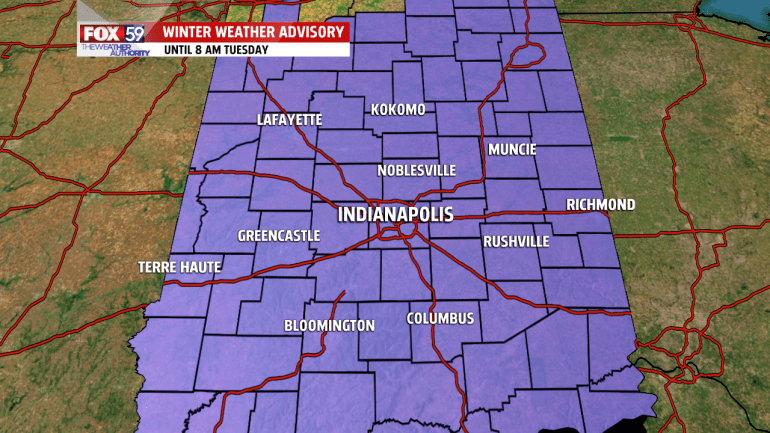 SNOW IS A LITTLE EARLY 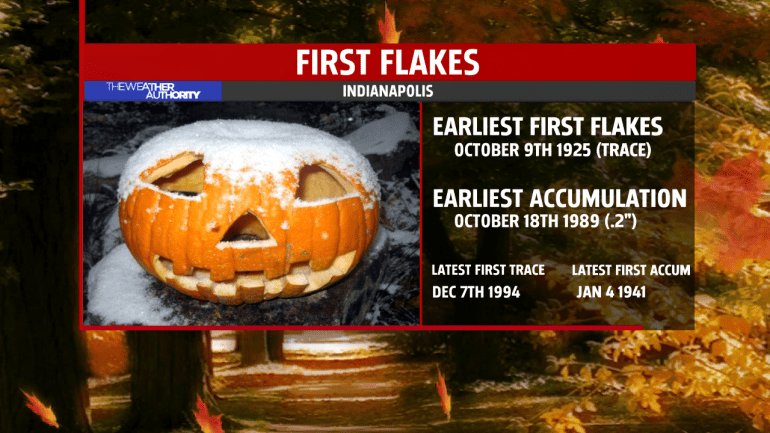 A full blown cross polar jet stream is delivering a bitter early-season blast of arctic air. As first forecasted over a week ago, the second surge of arctic air will be more bitter and threaten many cold record temperatures early in the week. 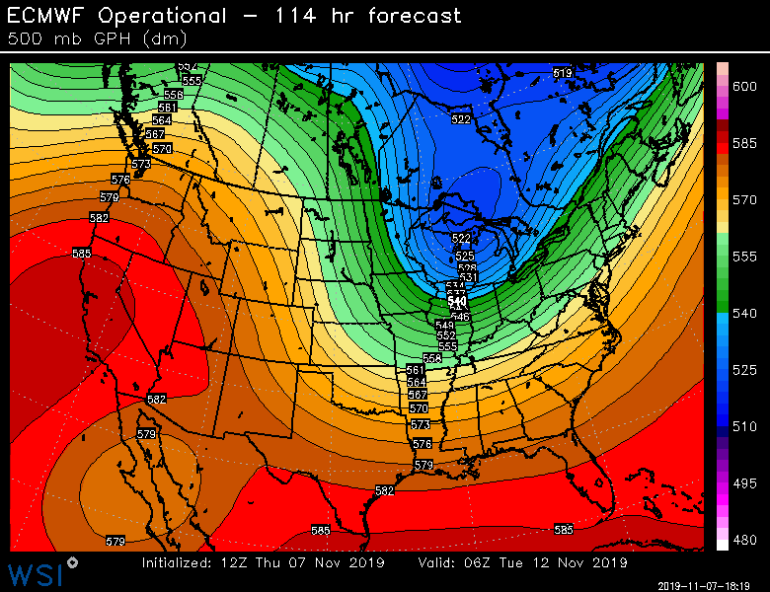 The temperatures have dropped sharply after 60-degrees on Sunday. By 5 p.m., temperatures had fallen well below freezing, nearly 30-degrees colder. Add a north wind at 15 mph and gusting, it feels like it is in the teens.

This is a formidable early-season arctic blast delivering low temperatures into the middle teens early Tuesday morning and challenging a record that has stood for 108 years. The record low of 14-degrees was set in 1911. 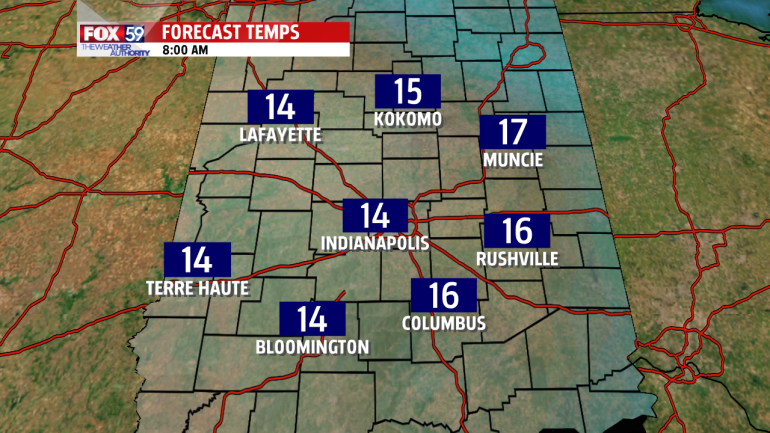 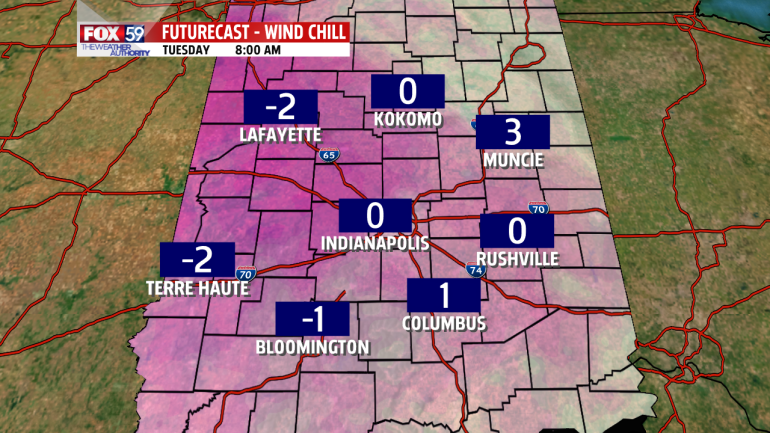 The cold will back off but not until another potential record low early Wednesday morning, with many locations dipping into the single digits by sunrise. The current forecast of 9-degrees will break the record 10-degrees, set in 1986. 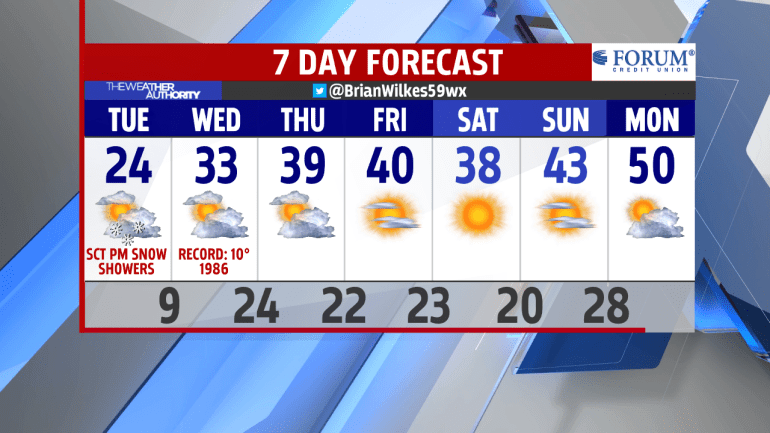 A misty and foggy start; tracking light snow for Wednesday

Gray skies, mist, and patchy fog will greet you on this Tuesday morning.

Up north, light freezing mist continues across several counties (White, Cass, Carroll, Grant and Miami), while a winter weather advisory remains until 1 p.m. Ice accumulations will be light but roads will be icy in spots, while temperatures hover in the lower 30s.

Our first wave of messy weather for this Monday has moved off to the east and another wave is set to impact us over the evening hours. Monday morning and early afternoon saw a variety of precipitation from rain, freezing rain, sleet and snow. The temperature of the air column and surface are key into what type you see. We'll see a variety again this evening as the second wave moves on through.

A Winter Weather Advisory has been extended until 9 AM Tuesday for the northern half of the viewing area. It has also been expanded to include Hamilton, Boone, Montgomery and Fountain counties. Fayette, Union and Wayne counties in east central Indiana remain under the advisory until midnight.

Tracking a wintry mix to start a new work week

Expect a dry start this morning, for most, likely through the rush hour before an icy mix of freezing rain and snow begins to build in from the south.

At this time, if roads get slick, most of this will not begin until after 10 a.m. for downtown. Slick conditions will be likely south and west much earlier from Terre Haute to Bloomington.

1 dead, several critically injured after a tornado in Alabama

US Treasury again working to put Harriet Tubman on $20 bill

Kerry: US will make up for 4 years of lost action on climate

Photos: The first dogs are home! Champ and Major arrive at the White House

Study: Cancer drug may aid in treatment of COVID-19

First US case of Brazilian COVID-19 variant found in Minnesota

The worst — and best — states for driving

1 dead, several critically injured after a tornado in Alabama