The heat is on in central Indiana, and it isn't going anywhere in the near future. Instead of opening October with nice fall temperatures, we are going to open the month with it feeling more like July and August.

We can thank the heat due to an upper-level hot dome that is taking up residence over the Mississippi/Ohio River valleys. It will send temperatures into the 90°s from central Indiana to northern Louisiana.

Temperatures will top out in the lower 90°s around central Indiana Tuesday afternoon. I would not be surprised if a few locales reach 93°.

While it will feel a little uncomfortable Tuesday, luckily, humidity levels will not be July/August-like. Meaning, dew point temperatures will be in the middle/upper 60°s as compared to lower 70°s. This will send the heat index from 92° to 96° Tuesday afternoon.

Indianapolis reached 92° Monday. That easily surpasses the previous record for September 30 of 89°, which was set in 1971. 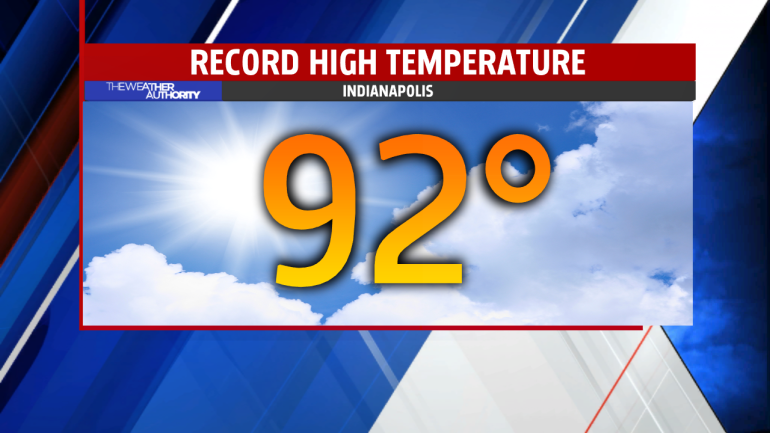 We are going to be chasing -- or better put, smashing -- at least two, possibly three additional record temperatures through Wednesday.

The record high for October 2 is 89°, set in 1953. This one could be a little closer, but at this time, I think we should be able to surpass it. This potential record breaker will be highly dependent on clouds drifting south/southeast from rain in northern Indiana and northern Illinois.

A third record that could be easily poached is the average temperature for September 30 through October 2. 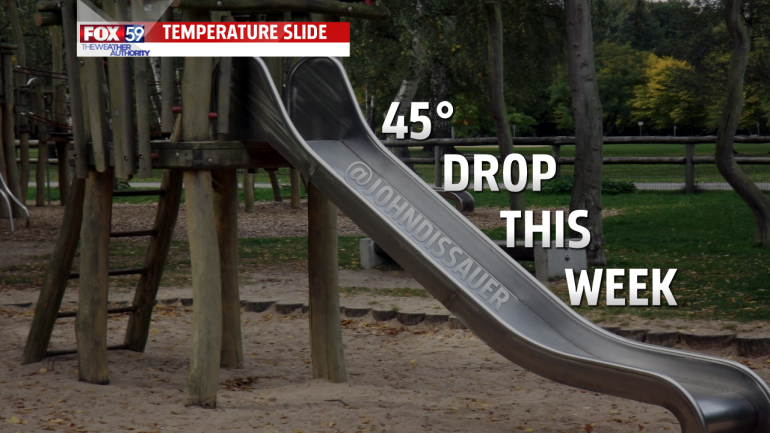 Long range computer models suggest we get back to normal temperatures by the end of the week and in to the weekend. It will be a big shock to the system as temperatures will drop 45° from the high temperature Tuesday to the low temperature Saturday morning. With luck, this will be the last of needing to use the air conditioner for several months. 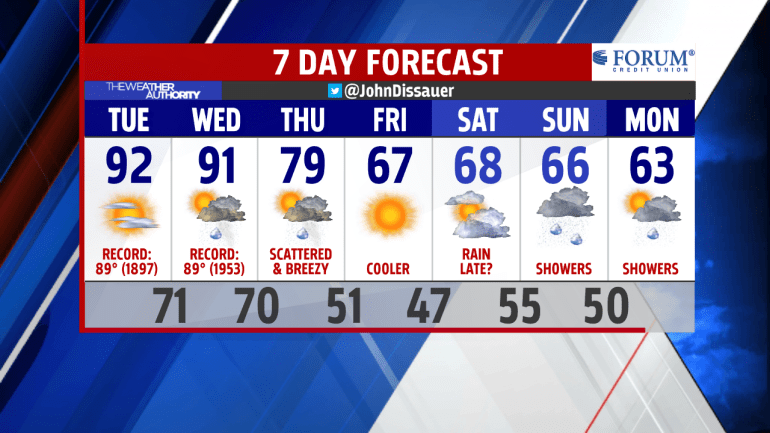 Freeze warning in effect; cool and quiet finish to the week

There is a chill in the air this morning! Temperatures are going to drop below average by nearly 10 degrees as we kick-start our Friday in the lower 30s. A Freeze Warning is in effect through 9 AM for much of central Indiana, since temperatures have fallen below freezing for several locations. Temperatures this cold could damage sensitive plants and crops, which is why the warning was issued.

A high pressure system is going to slide across the Ohio Valley today and provide the area with mostly sunny skies! The northwesterly wind could still be strong at times today with gusts up to 25 MPH. Highs today will climb near the 50° mark this afternoon in Indianapolis

Gusty winds and colder air followed Wednesday night's storms and this chilly may not be letting up for some time. After two days of June level warmth and a month that was running as the warmest in eight years, colder air has arrived.

Update (9:55 AM) - The National Weather Service has expanded the Wind Advisory south to include Indianapolis. The advisory is in effect for the northern half of the state through 8 PM. Sustained wind speeds between 20 and 30 MPH will be possible with gusts up to 50 MPH at times! The strongest winds will likely occur during the middle part of the afternoon. Wind gusts were already near 35 MPH at 9 o'clock this morning!

Prepare for a big change in today’s forecast! On Wednesday evening, a line of severe thunderstorms traveled over central Indiana. This wave of thunderstorm activity was associated with a passing cold front.

Marion County property taxes are being sent, but many have extra time to pay before the due date

Worldwide deaths from the coronavirus hit 100,000

Disc jockey on a mission to provide hope during pandemic

Even occasional marijuana use raises risk of COVID-19 complications

Marion County property taxes are being sent, but many have extra time to pay before the due date

Worldwide deaths from the coronavirus hit 100,000