After a beautiful, calm weekend across central Indiana, we’re about to shake things up again. We’re tracking a weather system to our west that will bring us rain, t-storms and windy conditions as we start a new work week.

While rain chances are most likely to arrive after the morning commute, still have the rain gear handy. You’re going to want it around as we head later into the morning and afternoon. Best timing for rain to move into our western counties will be after 8 am, arriving in Indy metro closer to 10-11 AM. 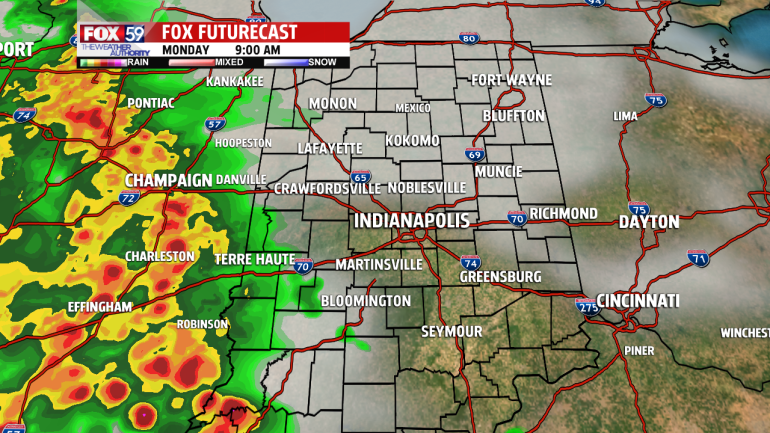 As these showers continue to spread east through the morning into the afternoon, we’ll likely see a few thunderstorms developing out of these as well. The afternoon hours will be when instability is more favorable for thunderstorm development. 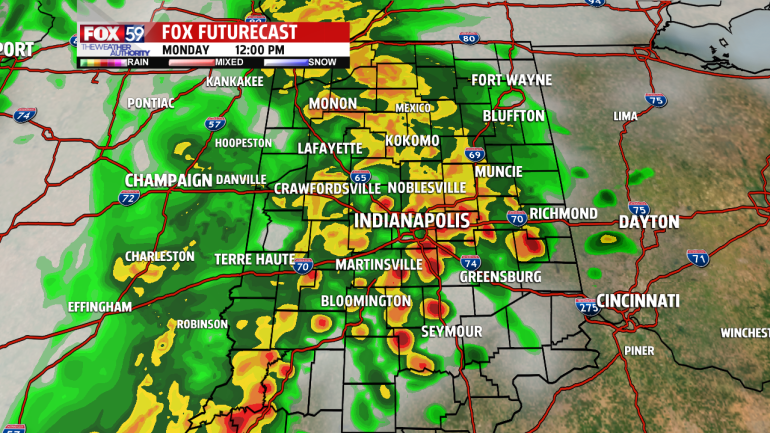 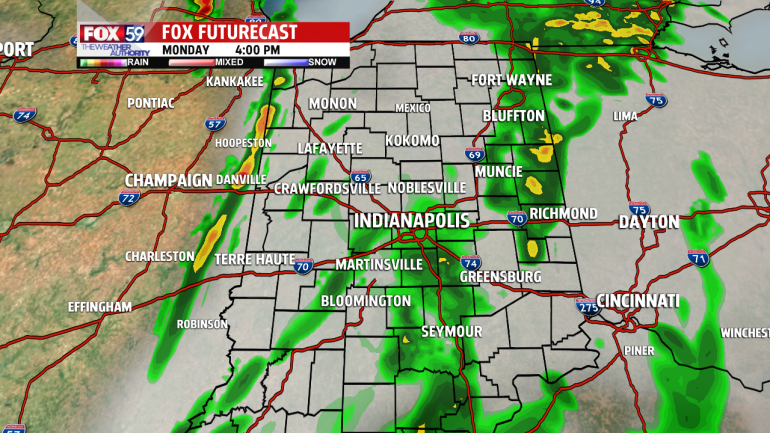 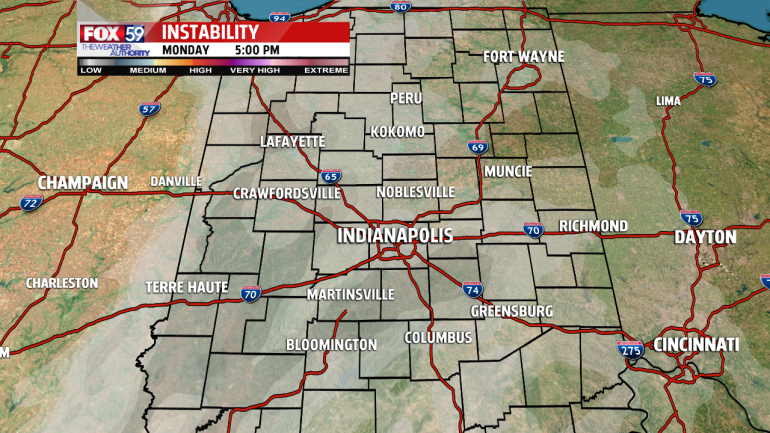 While cloud cover and rain will inhibit instability, a few isolated stronger storms can’t be completely ruled out. Winds gusting 30 to near 40 mph at times will already be impacting the state. A few t-storms that develop may be capable of bringing even stronger winds to the surface during the afternoon/early evening hours. 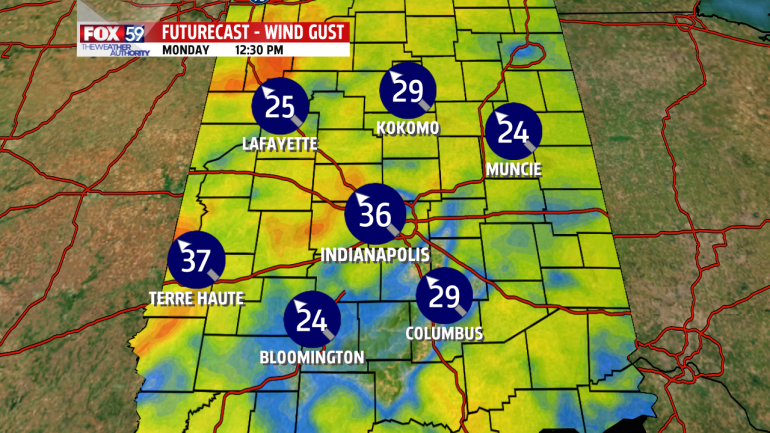 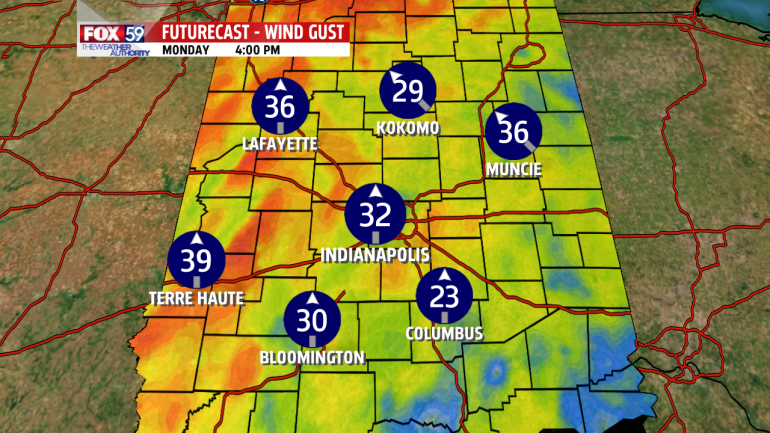 We certainly need the rain. Indianapolis is now running more than 4″ below the average rainfall we should have had for the season, to-date. Much of central Indiana is under “Abnormally Dry” or “Moderately Dry” conditions. 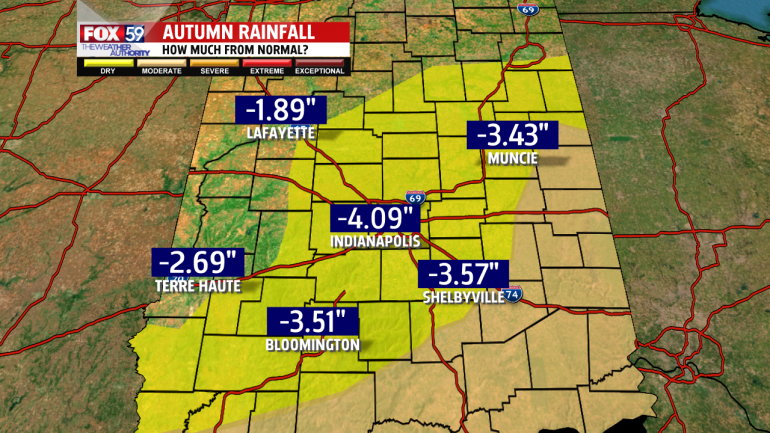 The bulk of the rain will fall by the mid afternoon hours on Monday. Current models indicate much of the area could see upwards of a half an inch of rainfall with localized higher amounts of an 1″+. 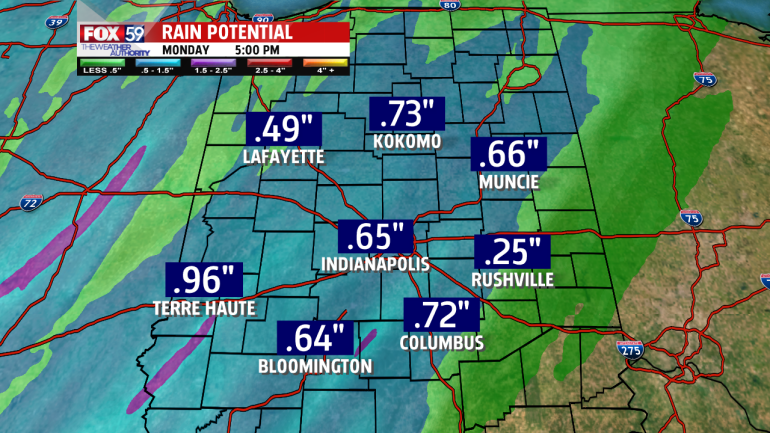 As the cold front clears the state late Monday night, rain chances will ease and temperatures will drop to much cooler conditions from where we’ve been the past few afternoons. 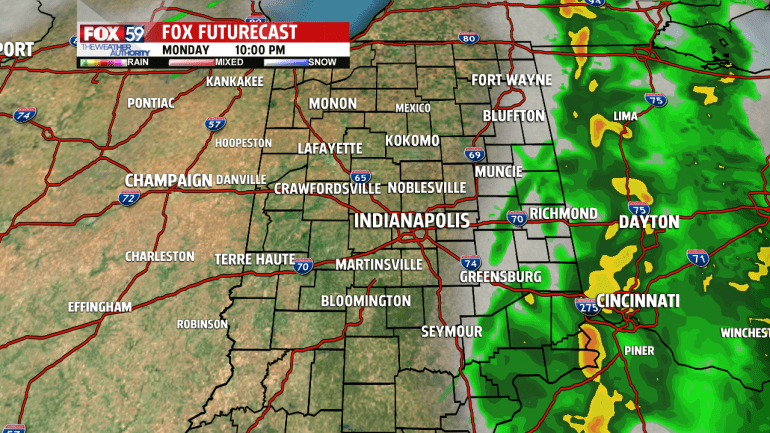 Plan on temperatures Tuesday afternoon only peaking in the mid to upper 50’s before dropping to back into the 30’s by early Wednesday morning. 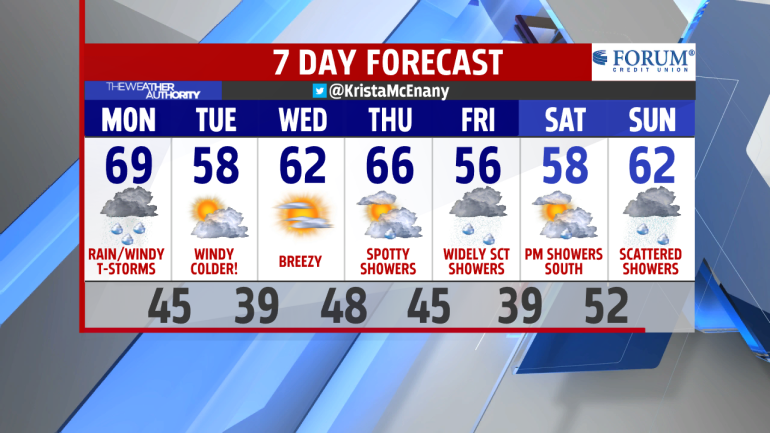 Hot streak now underway with no storms in sight

Skies are clear and temperatures are mild to begin our Thursday, and for most, the end of the workweek. Lots of sunshine anticipated for this afternoon along with light winds and little to no rain across the state. After reaching 90° on Wednesday, another hot one on the way today with highs likely reaching 90° or higher.

Heading into the holiday weekend, more of the same is expected. The dog days of summer are here, or what is also known as the lazy, hazy days of summer. Plenty of 90° heat will be with us this holiday weekend as the dry pattern takes hold. Great for fireworks, but don't forget the water hydration during the hot hours.

June rainfall was very hard to come by and for most of the month with the city of Indianapolis and most reporting stations running at a deficit. Over a span of five days, some locations received over 4" of rain, specifically the National Weather Service office on the southwest side of Indianapolis. The numbers go into the book as a surplus but that is far from the reality for many locations around the state. It is feast of famine this time of the year with rain being very selective. Bloomington ends the month well over 3" below normal while nearly Ellettsville (northern Monroe County) had nearly 4" of rain in under 24 hours.

Storm chances lessen as hot dome builds into the weekend

Expect a foggy, hazy start in spots this Wednesday morning, as we enter into a new month! Bright sunshine and muggy conditions will make for another steamy day, while highs reach the upper 80s. Isolated storms will be back in the mix today too, mainly driven by daytime heating and just enough instability around. Keep in mind, less in coverage than Tuesday afternoon.

Hot dome begins its push in tomorrow (Thursday)! As the heat pours in and slightly more stable air builds aloft, we will begin to "cap" the atmosphere. This will inhibit storm development and create one long, hot stretch of weather for the holiday weekend and beyond! Be sure to find cool spots, shade, and lots of water for your body during the fourth of July weekend. Be safe...

1 dead in northeast side apartment fire