The threat for a few tornadoes along with wide-spread damaging winds to 80 mph are likely later tonight.  hail to 2" in diameter is also possible.  The Tornado watch is in effect until 5 AM.

It has been a nasty night for portion of north-central Illinois as several tornadoes were reported.  Damage to a home and as late as 10:30/11:30 (EDT) a tornado was reported in Pontiac, IL 75 miles southwest of Chicago. 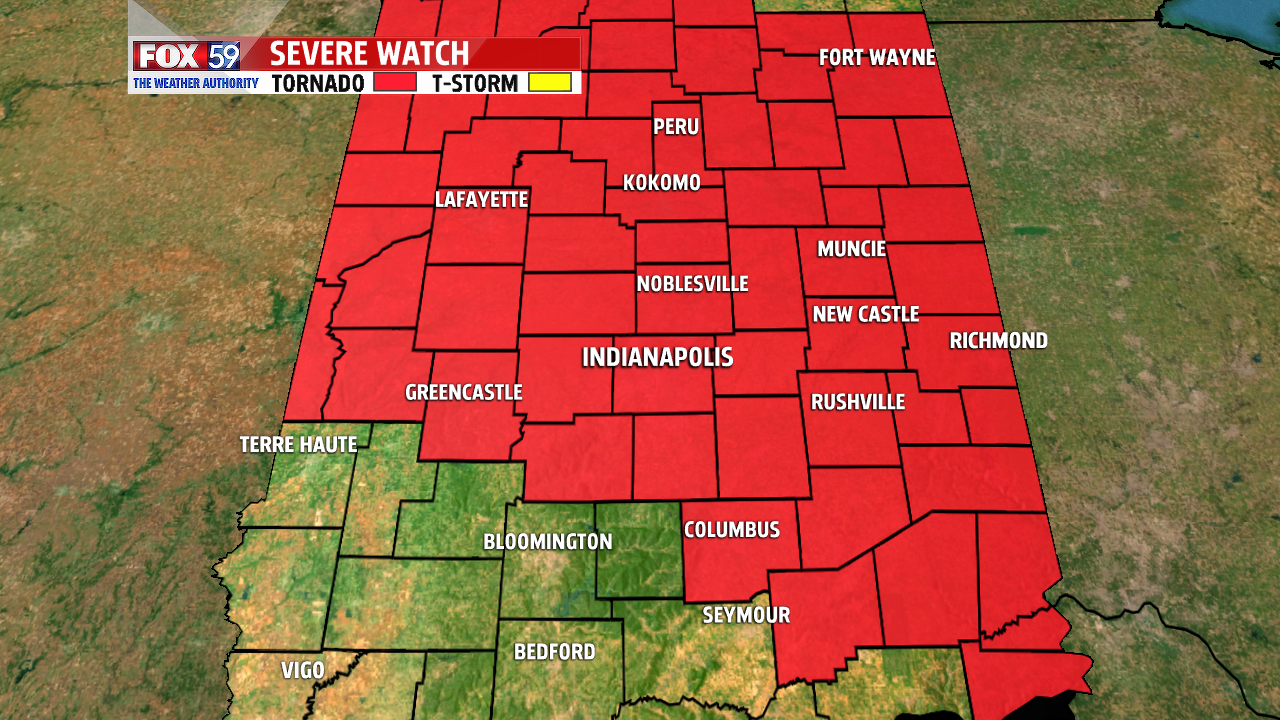 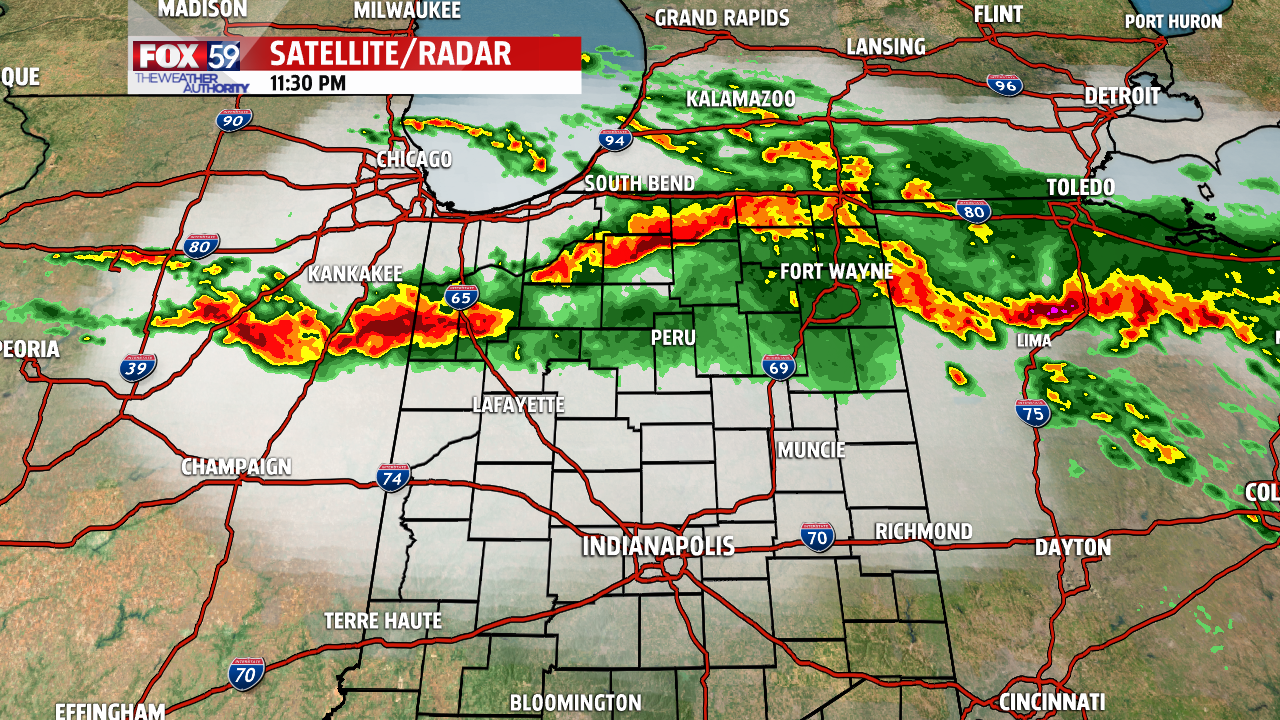 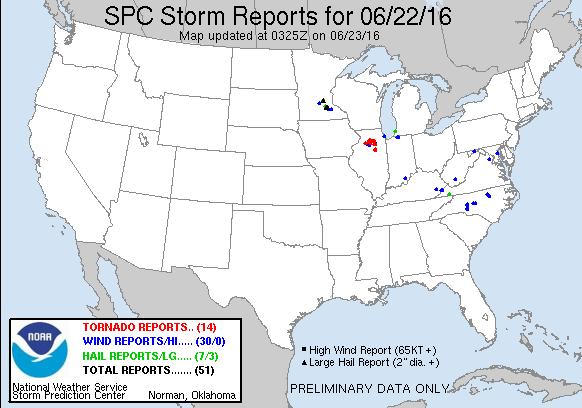 We are monitoring the set up for storms later this evening and tonight. We have many rain-free hours coming and the fireworks may really begin after 9 pm. 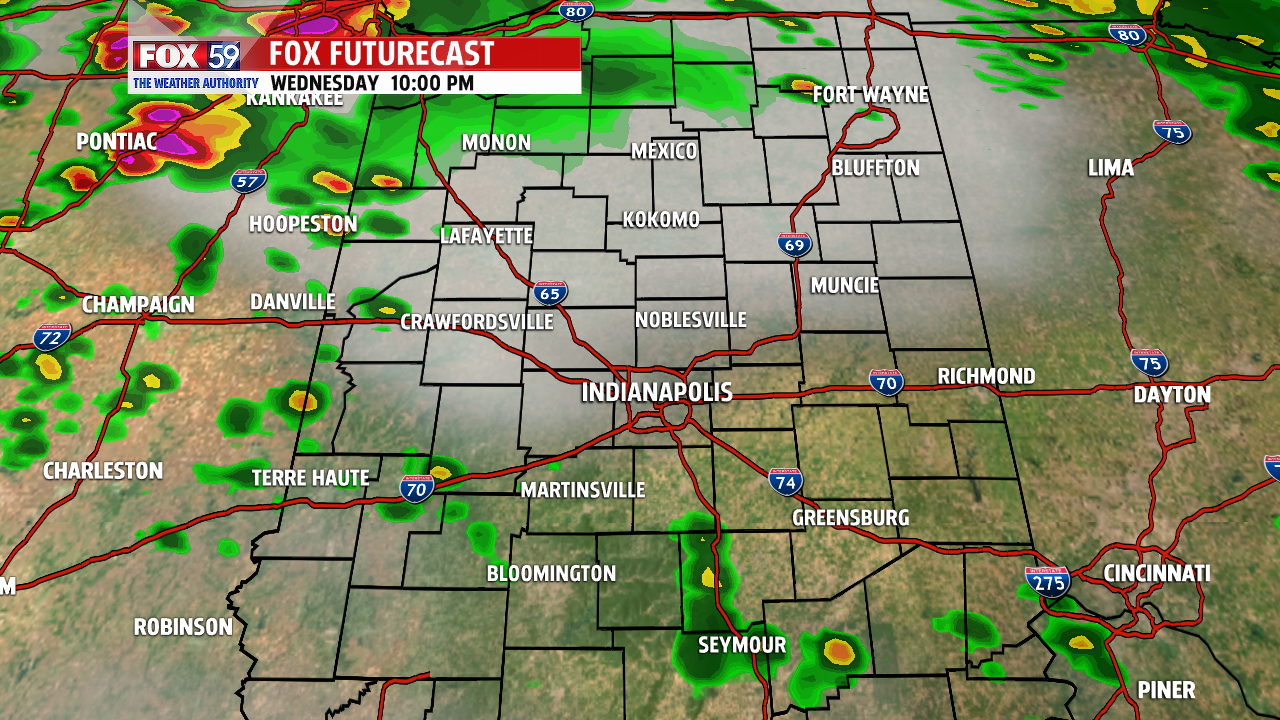 Showers and a few t-showers are diminishing just before 4 PM. A gap (as expected) of quiet time between early storms and a new storm complex is underway.

Storms will erupt later tonight - closer to sunset especially off tho the northwest in parts of northern Illinois and Iowa. Starting as only a few small blips on the radar, these individual cells could quickly become severe and produce tornadoes.

A TORNADO WATCH was issued just after 7 PM for a portion of Northwest Indiana until 1 AM (CDT).  Watch boxes will be expanded as the night wears on. 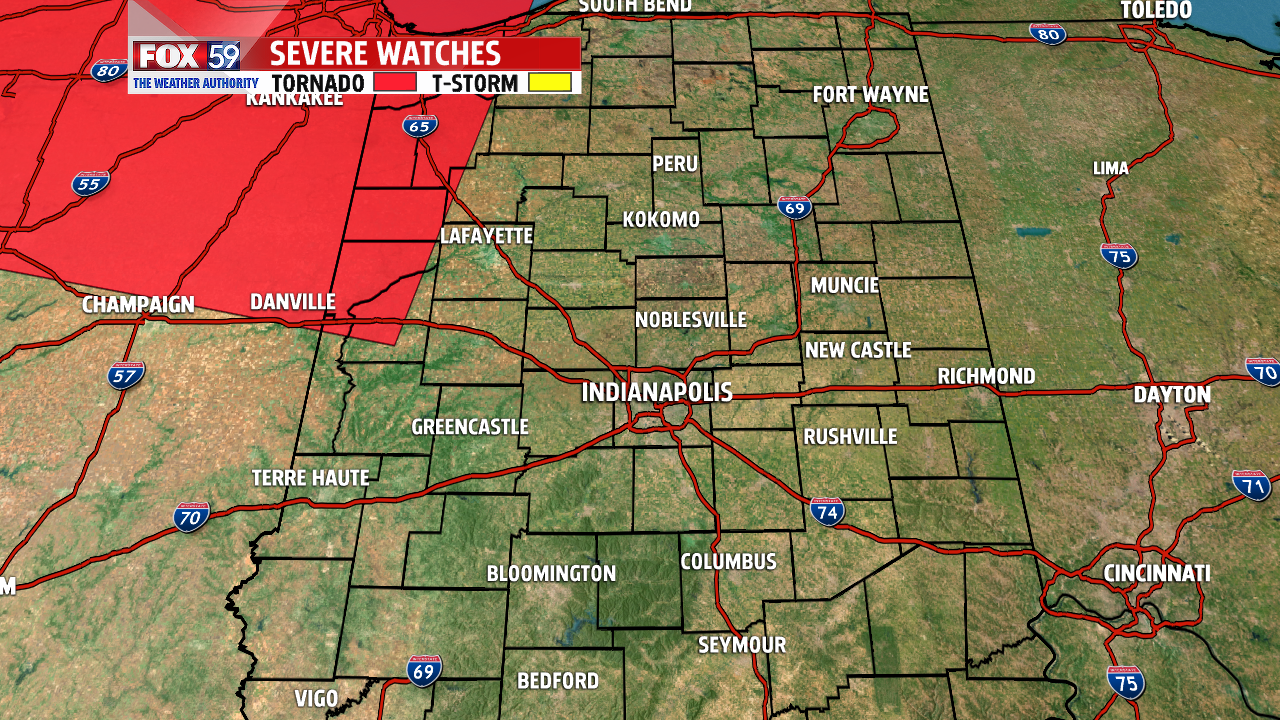 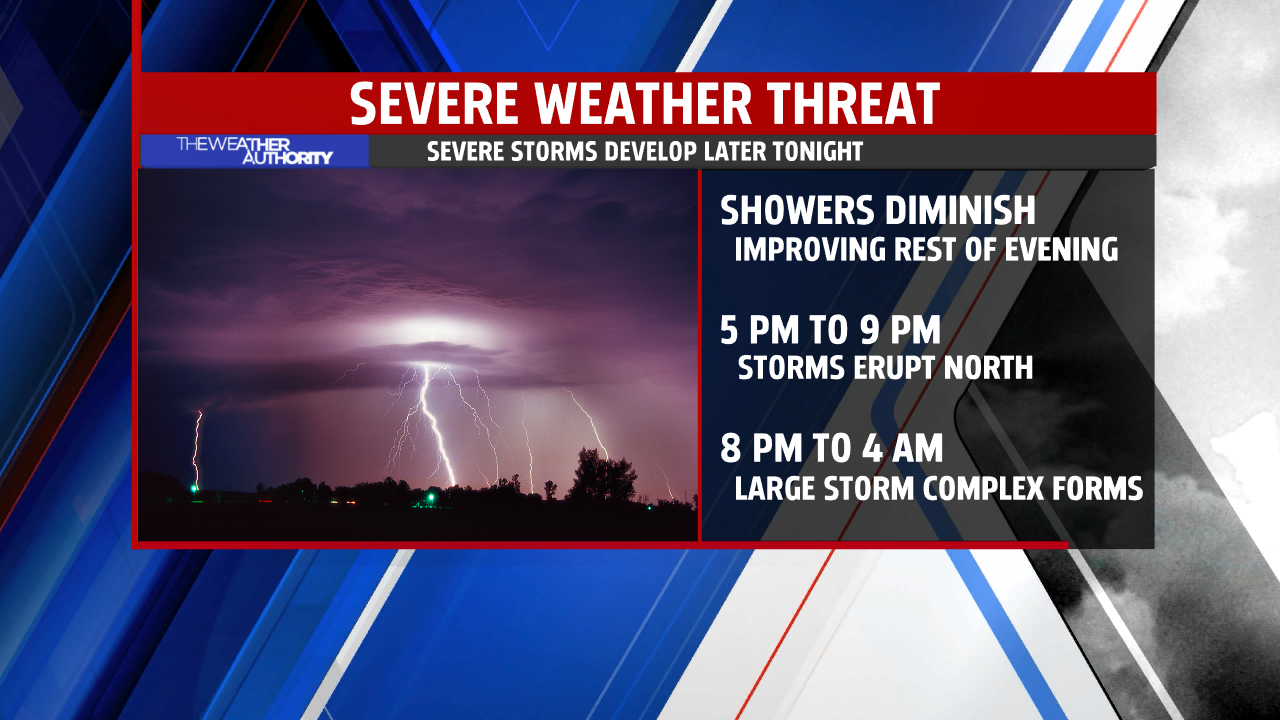 We are out-looked as a "MODERATE RISK" for severe storms by the Storm Prediction Center. An assessment given when severe storms are likely and the ingredients favor large scale severe storms that will be rather wide-spread later tonight.

Current thinking is that initial storms that fire up with a threat of producing tornadoes will then evolve into a large storm complex that delivers a wide swath of damaging wind. The 'wall' of wind is projected through parts of Indiana and Ohio later tonight. 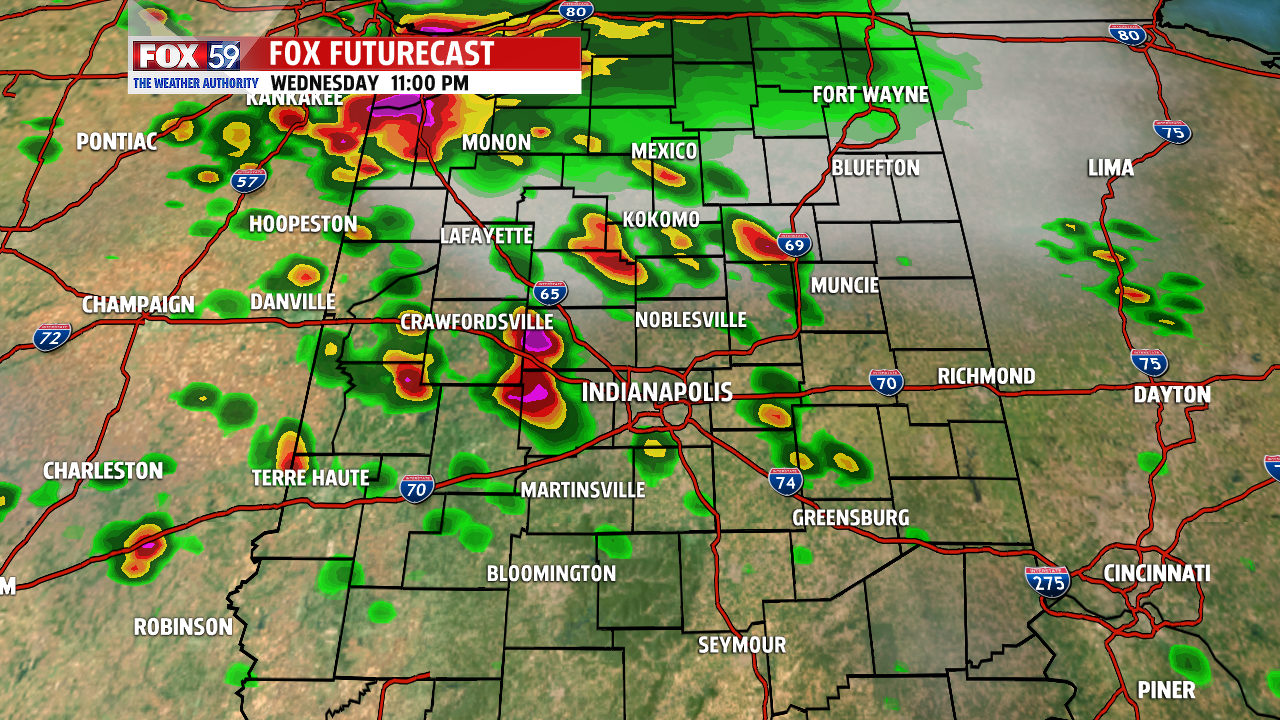 Severe watch boxes will likely be issued later this evening.  Along with the storms will come locally heavy rainfall. Additional flash flood watches are likely across much of central and north central Indiana.

A chilly start to the week

This weekend brought another snowy day to central Indiana. Although, overall accumulations were very light and most of the snowfall melted on contacted. Only trace of snowfall was recorded in Indianapolis. Naturally, that doesn't make any kind of dent in the snow "deficit" for this time in the season. On average, we should have seen 11.5" of snowfall between December 1st and now.

These snow showers exit Sunday evening but areas of flurries will linger into Monday. Temperatures will drop into the mid and upper 20s tonight and wind chill temperatures will fall into the teens. While there isn't a lot of snowfall on the ground, there is still plenty of moisture. Be cautious of slick spots on the roads tonight and Monday morning.

Light snow showers are flying across central Indiana this Sunday morning. Another upper level wave is bringing the additional snowfall to the area for today. Additional snow accumulation will remain light with several locations receiving less than 1”.

However, there could be some spots that see a “heavier burst” of snow and may see a bit more than the one-inch mark. The totals will likely range between 0.5” to 1.5” through Sunday evening.

It's been a snowy and cold Saturday. However, Indianapolis is still well below the average snowfall by this time in the season. Only 1.8" of snowfall was recorded at the Indianapolis Airport on Saturday. That brings our seasonal total up to a mere 4.9". That's still 6.3" below average and the least snowiest Meteorological Winter, to-date, since 2015.

Snow showers will continue to ease Saturday evening and become isolated overnight. We're not done just yet. Additional snow showers will develop again on Sunday and bring another 1" to 2" of snowfall to the area. Slick spots won't be the only travel concern. Heavy bursts of snow will be possible at times and could lead to reduced visibility.

While You Were Sleeping: Coronavirus updates for January 18

How Betty White is celebrating her 99th birthday

While You Were Sleeping: Coronavirus updates for January 18