(Dec. 20, 2014)–The mercury rose to 32 degrees in Indy Saturday afternoon for the first time in days. Temperatures at the 4 p.m. hour were hovering near freezing across central Indiana. Good news, the winds are calm so there’s not much of a wind chill to deal with. 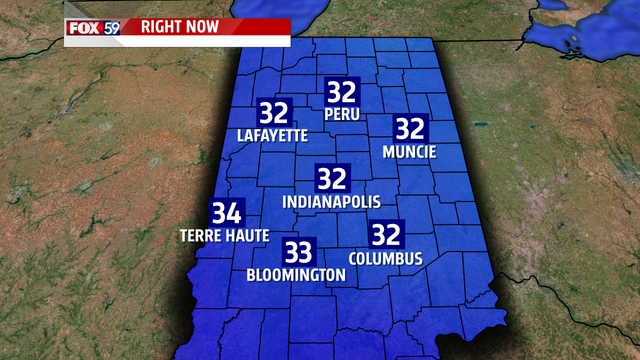 Tonight, we’ll see low temperatures drop to the mid-20s with a mostly cloudy sky. Models show dry air working its way into southern Indiana so some clearing may take place there. Winds will go from north to southeast and remain light through Sunday. 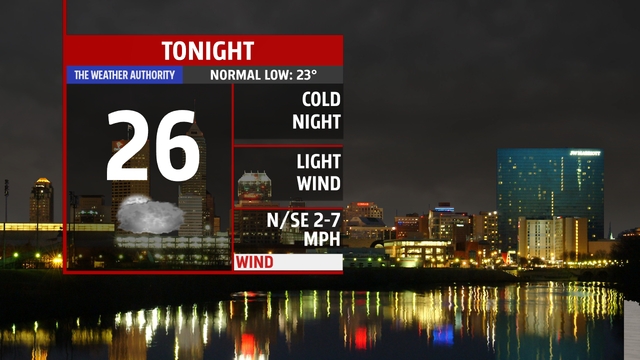 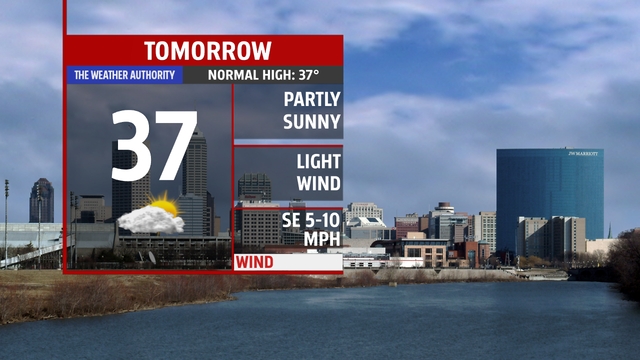 A wave of energy in the atmosphere will move by Monday, bringing a good chance of rain to central Indiana in the later part of the day. Temperatures will be much warmer in the mid-40s and winds, a tad breezy at 15 mph.  Rain will continue Tuesday with highs in the upper 40s. Models show anywhere from 0.25 to 0.50 inches of rain is possible in the city. As one low pressure moves north of us and another develops to the southwest and moves in, expect strong winds by Christmas Eve and Christmas Day. Temperatures will most likely be falling Wednesday with a good chance of rain changing to snow late.  Lingering snow showers are expected on the back side of the storm system for Christmas Day. Models suggest sustained winds of 20-30 mph with higher gusts mid-week. It’s too early to tell how much snow we may see but do expect any amount to cause problems as strong winds and blowing snow will limit visibility. Stay tuned as we track this system! 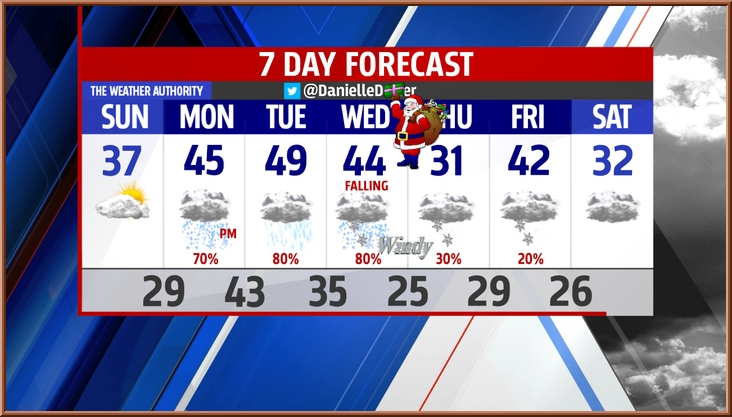 Severe storms traveled parts of the Midwest on Wednesday with most of the activity occurring west of central Indiana. There were several thunderstorm wind damage reports and a handful of tornado reports, including a brief touchdown near South Pekin, IL. The storms weakened as they moved into Indiana last night due to a lack of instability and the loss of daytime heating.

It is a sticky morning with temperatures and dew points in the lower 70s! But the radar is looking mainly dry across the state to start our Thursday. An occasional shower or thunderstorm is still possible today as a storm system tracks through central Indiana. Most of the rain will likely fall over areas north of I-70 and should end early in the afternoon. Severe weather is not anticipated because the position of the low will be situated east of the area by peak heating hours. Skies will remain mostly cloudy for several hours and eventually become partly sunny by the late afternoon. Highs will climb into the mid-80s, which is seasonal for mid-July.

Here comes the humidity. On the rise Wednesday afternoon and projected to remain rather sticky for at least the next 10 days. High clouds are arriving late day but rain and the storm threat still many hours away. These clouds are the product of upper-level winds shaving off storm tops several miles to our west.

The 90s are sneaking back into the forecast today! Hopefully you were able to enjoy the comfortable weather we had earlier in the week because more humid and hotter air arrives today. It was a mild morning around the state with temperatures in the mid-60s. Skies are mostly clear this morning and we should have plenty of sun in the day ahead as highs jump back into the lower 90s.

A more active weather pattern is going to set up beginning tonight. A cold front is going slowly travel east over Illinois today and eventually stall out. The nearby boundary will contribute to storm chances tonight and through the second half of the workweek.

While you were sleeping: Coronavirus updates for July 16

Alabama governor is the latest to issue statewide mask requirement

US executes 2nd man in a week in Terre Haute after Supreme Court ruling; lawyers contended he had dementia

While you were sleeping: Coronavirus updates for July 16

Alabama governor is the latest to issue statewide mask requirement