This September now ranks the third driest to-date in Indianapolis this Friday morning! Very little rain has fallen around central Indiana, which has resulted in some locations to see abnormally dry conditions and even moderate drought conditions according to the latest Drought Monitor update. We really could use the rain! Indianapolis has only received 0.01” of rain since the first of the month! Rain chances today remain low, but an approaching cold front will bring a more favorable chance for rain at the end of the weekend. 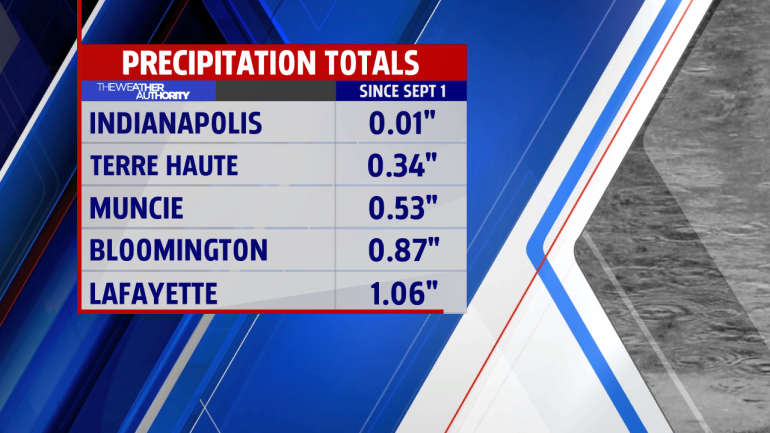 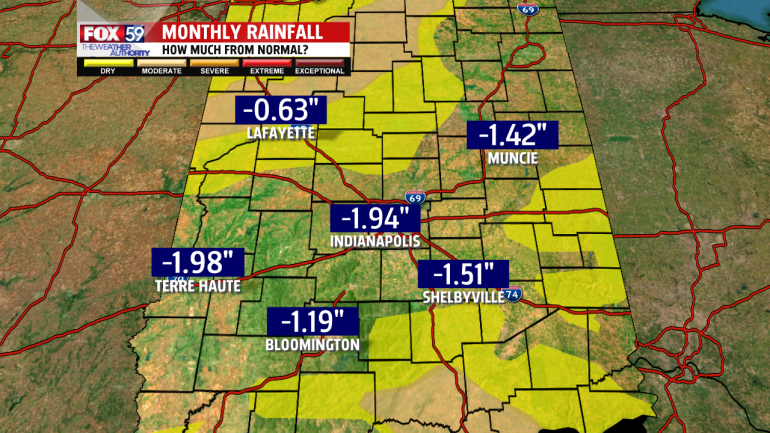 There are going to be mainly dry conditions today with increasing cloud cover. However, a nearby boundary could produce a couple isolated showers or storms during the afternoon hours. Many areas will still be in good shape for high school football games this evening, but it will be unseasonably warm! Highs will climb into the mid to upper 80s this afternoon. The average for the date is 76° in Indianapolis. 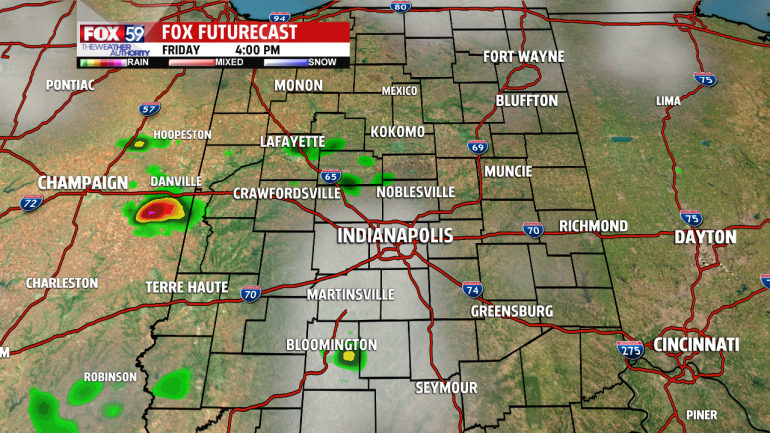 We will have a dry start to the weekend as temperatures continue to rise near 90°. There is a slow-moving cold front west of the state and it will move closer to the Indianapolis area by Sunday evening. Rain chances will hold off for those tailgating for the Colts! Kick-off at 1 PM will be dry, but showers could be on radar at the end of the game. Most of the rain will likely fall late Sunday night into Monday morning as the boundary travels over central Indiana. 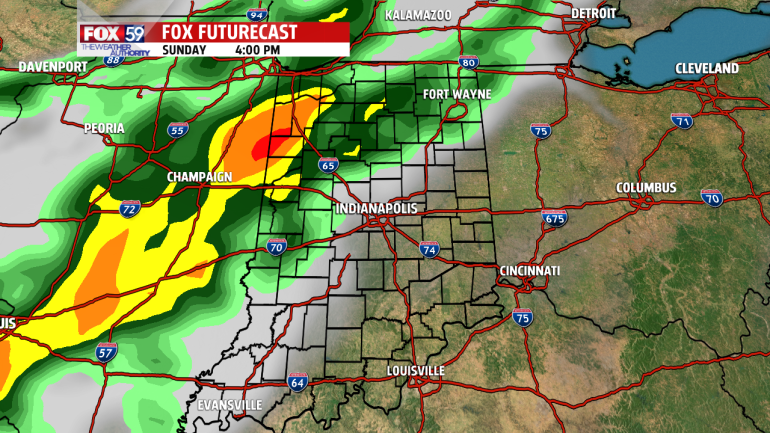 Temperatures will become more seasonal as we start fall on Monday! Lingering showers early will give way to some sunshine by Monday evening. Temperatures will begin to warm back up next week with above average highs returning to the area. 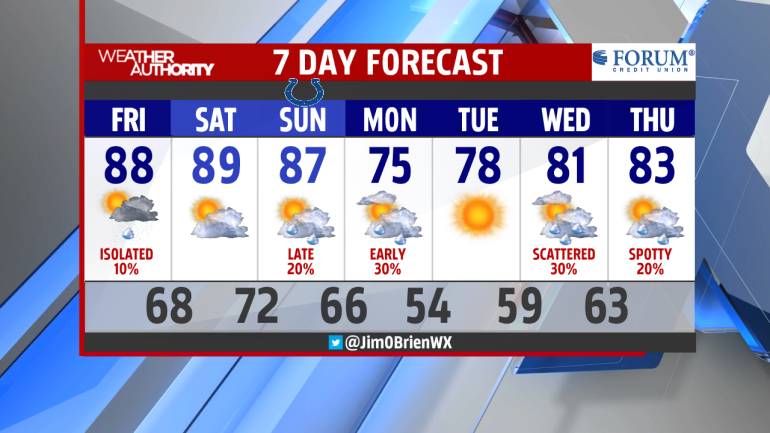 The tropics are still very active this Friday morning. Imelda brought more than 40” of rain for some communities in southeast Texas! North Fork Taylors Bayou received 43.35” and Green Pond Gully had 40.87” if rain! Both totals exceed the total amount of precipitation in Indianapolis (36.56”) since January 1! 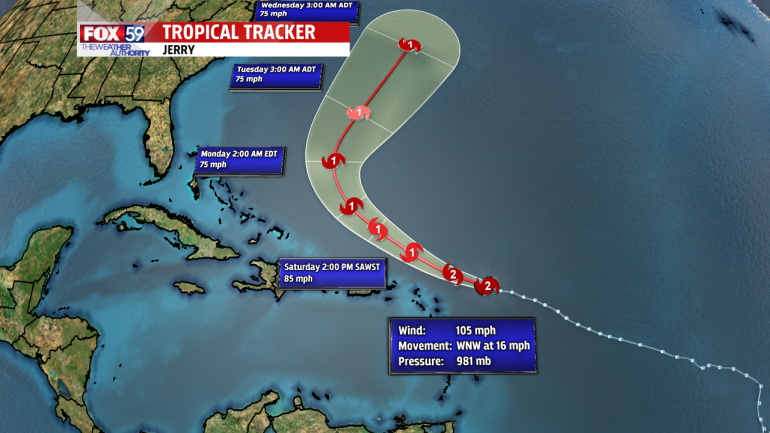 Humberto is now considered a post-tropical cyclone, while Jerry strengthens to a Category 2 hurricane. Jerry is producing sustained winds at 105 MPH and is expected to bring flash flooding to the northern Leeward Islands. There are also three named tropical storms in the eastern Pacific this morning. 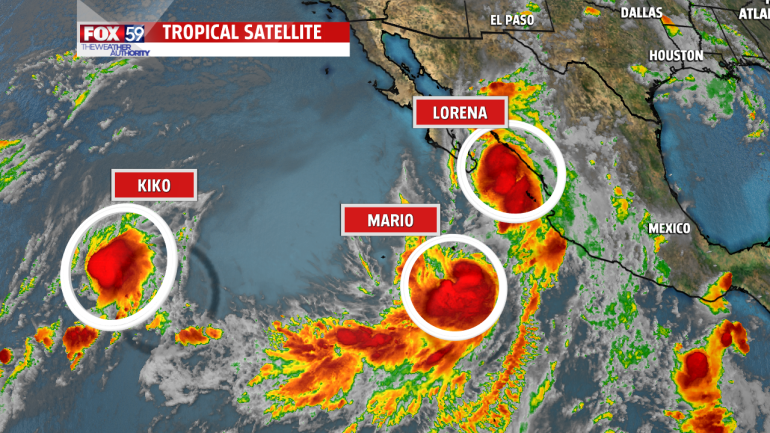 Expect a damp start, along with some patchy fog in the area to begin the morning rush hour. For now, rainfall has taken a break, as clouds slowly break at times through the day.

The combination of dryness and limited sunshine should help to move our thermometer back into the lower 60s by late afternoon, nearly 10° warmer than Monday.

Largest October snowstorm on this date 31 years ago

Do you remember the wild October snow storm of 1989? It started on October 18th – the earliest date on record for measurable snow for the city.  About .2″ fell by midnight, then 7.3" of snow fell on October 19th with a grand total of 9.3" falling from the 18th through the 20th.

Much-needed rain to start the week, easing the drought

Areas of rain falling across the state to start a new week! Much needed rainfall, as the abnormally dry conditions remain for 91% of the state, with 57% of that in a moderate drought...this will no doubt help! In fact, 0.60" of rainfall has dropped since 10 p.m.

Areas of steady rain will begin to ease late morning, turning to more scattered showers for the afternoon, so amounts will go down. Clouds will loom overhead creating a damp, chilly day. Most rain should be gone around sunset with possible patchy fog developing in the overnight.

Rapper accused of fraudulently getting $1.2M in jobless benefits after boastful music video

What Colts fans can expect at the concession stands this season

Rapper accused of fraudulently getting $1.2M in jobless benefits after boastful music video

What Colts fans can expect at the concession stands this season