The average temperature today was once again above normal making this the 56th day since September 1st above normal. Fall 2015 is 6.5° warmer than last year and even more impressive, the November we are having. November 2015 is the warmest in 21 years, 9th warmest to date on record and averaging 16 degrees warmer than last November. That my friends is a set up.

Sunshine Friday will only disguise the winter blast coming Saturday. At some point, the proverbial “other shoe will drop” was bound to happen.

A fast moving. ‘clipper’ low pressure will dive southeast Saturday morning spreading rain and snow through the Midwest. A heavy bad of snow is forecast along the Iowa, Minnesota, Wisconsin and Illinois borders. Winter storm warnings have been hoisted for the potential of a half foot of snow. 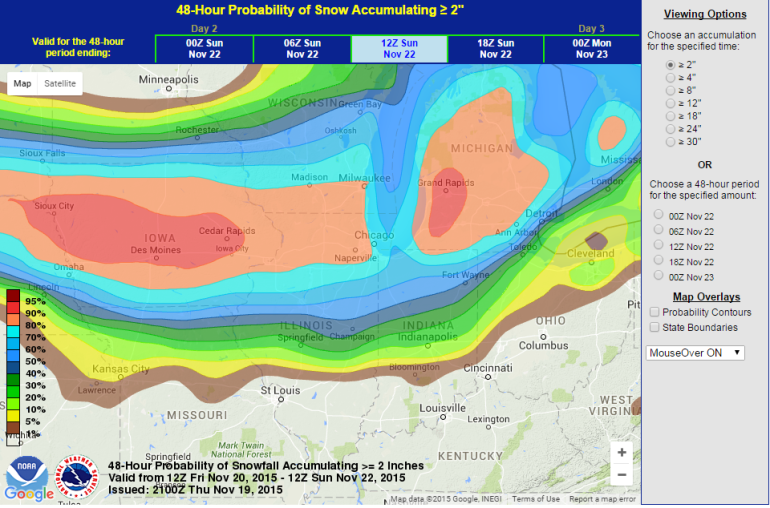 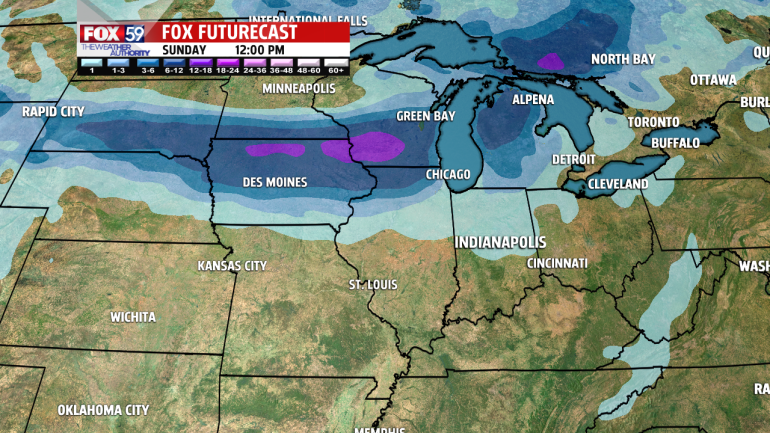 Earlier indications still suggest snow could stick here but not accumulate much. A coating is possible and of course later forecasts tonight will bring a more clearer picture. (European model has raised eyebrows). The thinking is that rain will spread throughout the state Saturday morning while still on the warm side of the system. Clipper storms typically are feast or and famine when it comes to snow. Most of the snow will fall north of the storm track. Locally, after the storm passes overhead and colder air roars in a burst of snow will develop. A coating is possible and it may look very wintry for a few hours Saturday night before ending quickly.

Much colder air pours in behind the storm – headed into the teen by Sunday morning.

Warming next week and Thanksgiving temperatures are expected back into the 50s –  warmest for Thanksgiving in 3 years.

After a holiday weekend that brought hot temperatures, lots of dry space with only a few, random storms in location...expect more of the same for this workweek! Dangerous levels of heat and humidity will take its toll while working outdoors. These are the days where if you are not hydrating, heat exhaustion or heat stroke can come on quickly. Water, water, water...

This pattern will hold through the week with no threat of record highs to fall but the heat indices will be pushing 100° or higher at times!

Heat wave holds on until next weekend; daily rain chances

It's the hottest day of the year, so far, with Indianapolis topping out at 94-degrees Sunday afternoon. This is the third day in a row in Indianapolis where we hit the 90-degree mark, making this an official "heat wave" for the city. However, several others reporting stations around Central Indiana have recorded 90-degree heat for the past 5 days. Indianapolis has made it to that threshold 4 out of the past 5 days.

THE HEAT HOLDS ON

Temperatures continue to climb this week

It was a hot holiday around central Indiana as temperatures climbed into the lower 90s!

Indiana reached 90° for a sixth time this year. A few downpours fired up during the heat of the day as well. Indianapolis only received 0.09” of rain on July 4.