It’s been chilly and widely scattered snow showers made an appearance for some of across central Indiana. However, overall, it’s been a rather quiet finish to the work week. The sun made an appearance and even though temperatures didn’t rise much above freezing, it helped melt away the light coating of snow we developed over the past couple days. 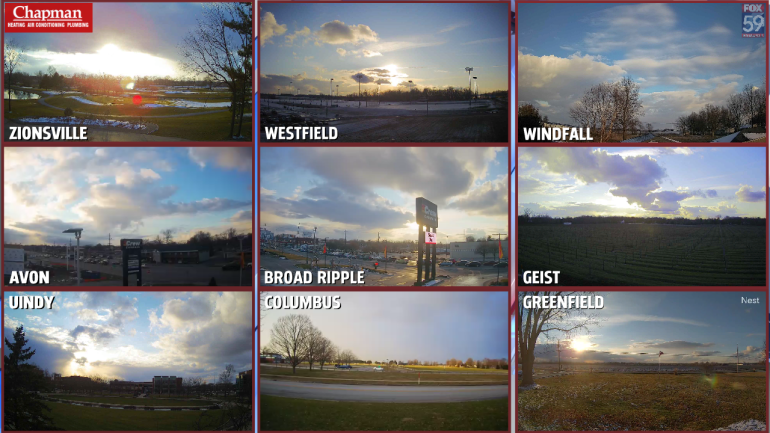 We stay cool and mainly dry through the evening hours with wind chills in the mid 20s. The roads were in pretty good shape for most of the area but a few slick spots can’t be ruled out, due to refreezing of some of the melted ice and snow. Really, there isn’t much concern for slick roads until the overnight hours when a clipper system will bring us a quick coating of snow. 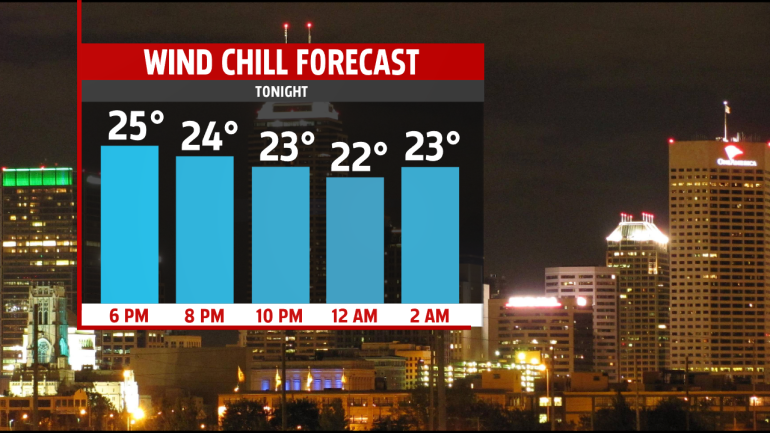 That system was moving through central Illinois on Friday evening and is expected to start moving into our western counties late Friday night, mainly after 11 pm. The nature of this system is a quick moving one that doesn’t have abundant moisture available with it. So, it’s not going to last long and it’s not going to dump heavy snow totals. Accumulations less than 1″ are most likely across central Indiana with some isolated areas seeing up to 2″. The bulk of the snow departs by day break but we’ll keep flurries and widely scattered snow in the forecast for the afternoon and evening. Be careful if you’ll be on the roads overnight or early Saturday as they could become slick. 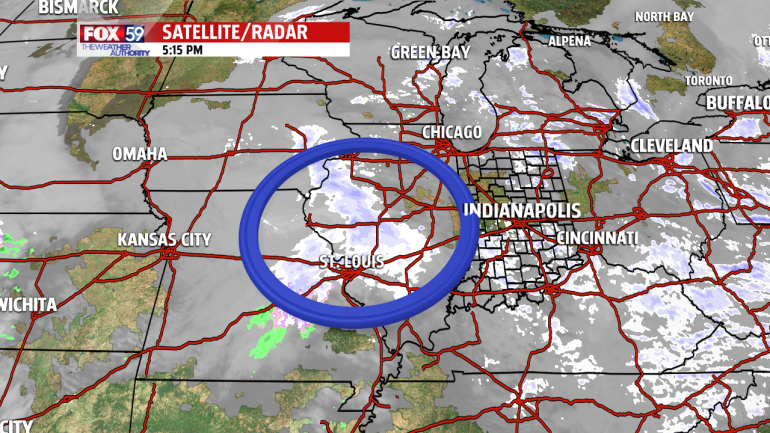 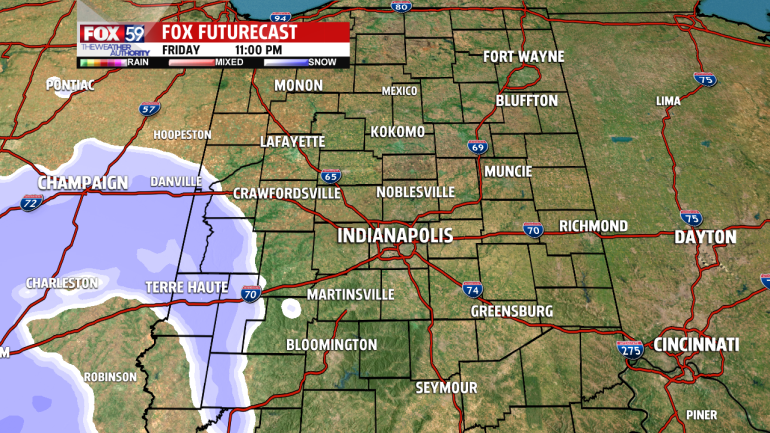 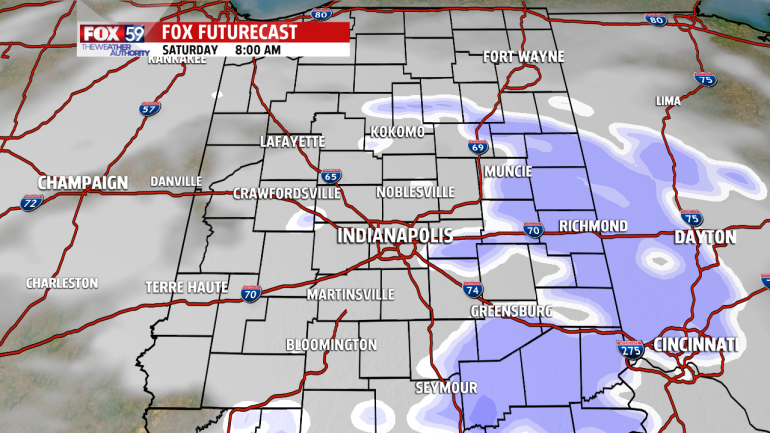 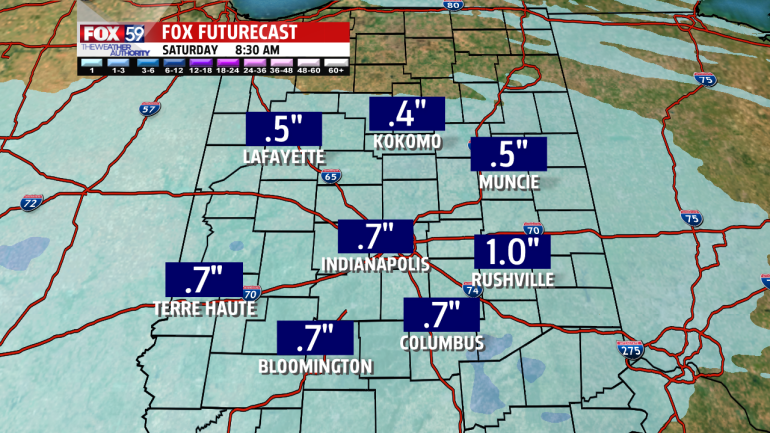 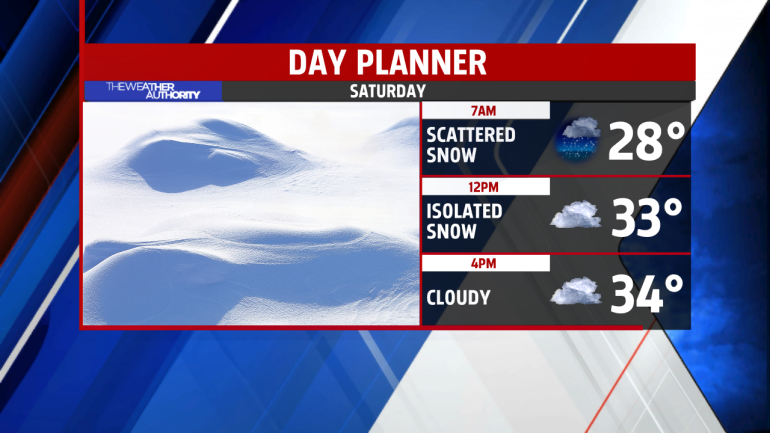 We’re tracking another wintry system to finish off the weekend. A wintry mix developing on Sunday afternoon will change over to all rain by the evening, melting away any snow accumulations from Saturday. Temperatures Monday morning will be well above freezing, so roads will be wet, not icy. Stay tuned as we are closely watching more active weather expected to arrive late next week. 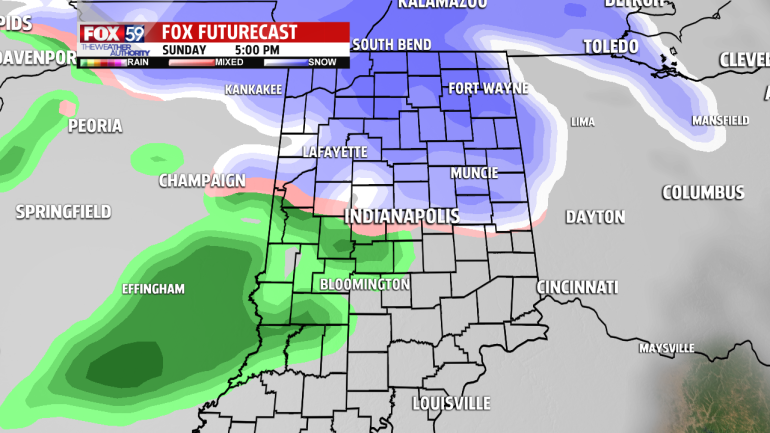 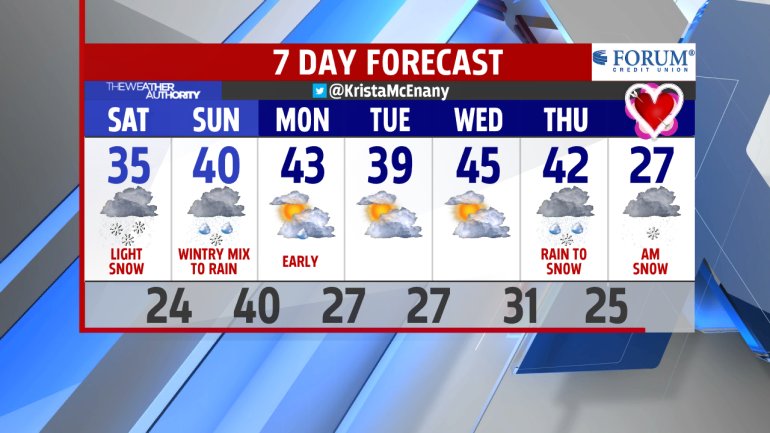 Coolest afternoon here since May but warmer pattern emerges next week

Tuesday temperature in Indianapolis failed to reach 50-degrees, the first time since mid-May and the coolest for an afternoon since April 14th's high of 47° So is this chill early?

The temperature today was well off the normal of 61° but it is not uncommon to fall short of 50° this time of the year.  Scanning weather records – the average date of the first sub 50° day is October 24st – so not too far off track.  Last year it arrived on October 30th and the earliest came on September 22, 1913!

Rather cloudy skies linger today, while temperatures remain chilly for late October (nearly 15° below the seasonal average). Expect a few patchy, light showers to drift across the state through the day on light northwest winds. Due to clouds, wind direction and light showers should keep us from warming much today, as highs reach the upper 40s.

Sunshine slowly returns on Wednesday, marking the best of the week, as highs reach near 60°. The pattern will quickly change by Thursday morning, while remnants of Zeta will interact with an approaching low. This could result in heavy rain and storms for the Ohio Valley, including parts of Indiana. As quickly as it arrives, it will leave swiftly by Friday morning.

Monday marked three straight days with high temps in the lower 50s. COOLEST stretch since mid-April. The temperatures were only in the mid-40s after 5pm Monday with light rain falling, well below the normal high of 62-degrees. The cool pattern will hold for the rest of the week and to end the month. Wednesday will feature an ease in the chill before an wind driven, rain maker arrives on Thursday.

Death investigation underway on Indy’s near northwest side

Can we celebrate Halloween during the pandemic?

A look ahead at the final Indiana Gubernatorial debate

Voters in some states unable to cast early ballots in person

Death investigation underway on Indy’s near northwest side