Wintry weather returned to central Indiana Wednesday with snow and rain arriving before the evening commute. The precipitation varied from rain south to snow and sleet north with a rain/snow tug of war across Indianapolis and just north of a line along I-70.

A combination of cold rain and at times wet snowflakes will continue for several more hours with the rain/snow line stalling near or just north of Indianapolis. It is all about location, and where it will be all snow, up to a half foot of snow is possible.

Snow accumulation of 4″ to 6″ is possible north and northwest with 1″ to 2″ across Indianapolis and along the I-70 corridor. Accumulation will be lighter to nothing further south. We are monitoring conditions and will update later tonight. 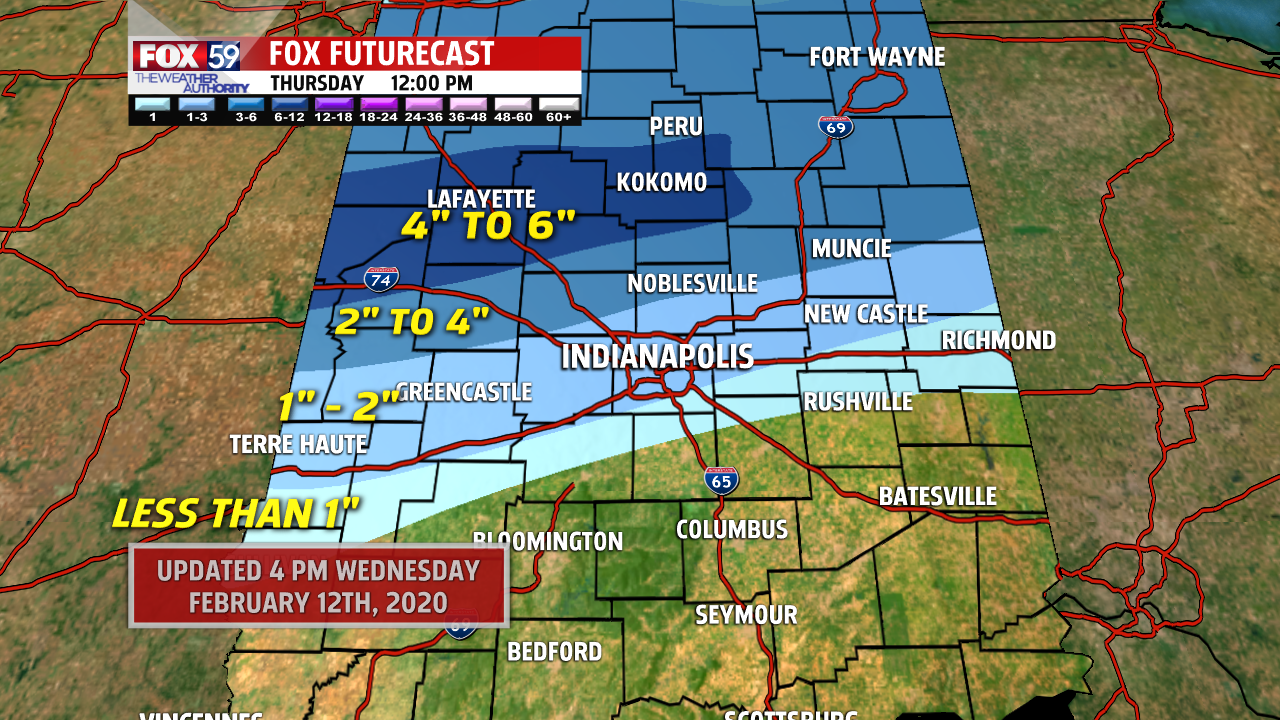 We’re breaking down the conditions.

Snow north of a line from Rockville to Brownsburg to New Castle will fall this evening and may be the transition zone to all snow overnight. A wet snow initially (good for packing) will become a lighter, fluffier snow overnight.

Below is a look at the varying conditions from Boone County to Monroe County. All is snow north, and it is sticking, while umbrellas are out at IU in Bloomington just after 6 p.m. 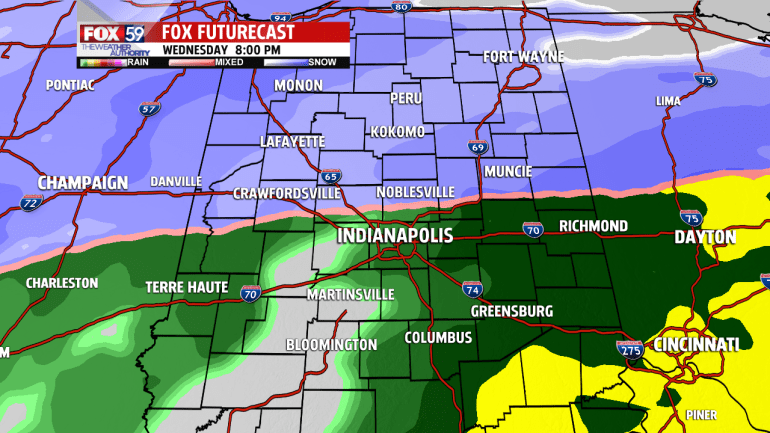 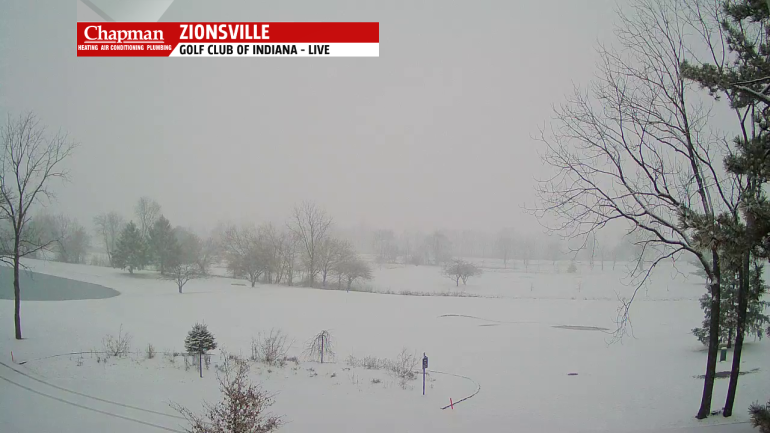 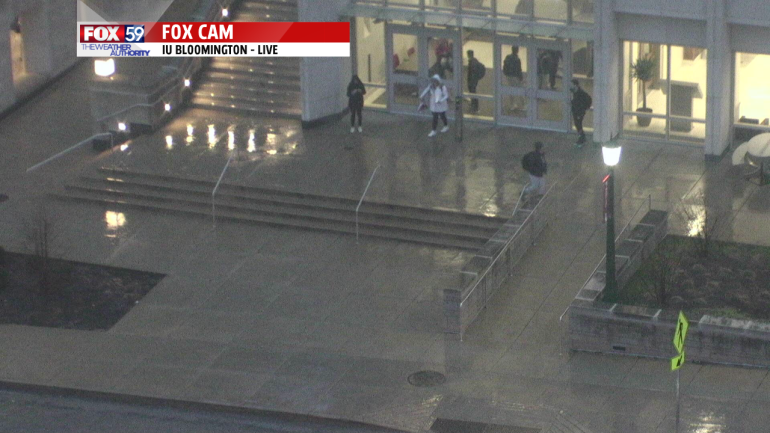 A cold rain with, at times, mixed wet snow through 12 a.m. is likely along and north of I-70, through Indianapolis. Little to no snow accumulation will occur until after 12 a.m., when colder air makes a return. Snow will increase in coverage and intensity through 4 a.m. and bring slick conditions for the morning commute.

South-central Indiana will remain as a cold rain tonight but will see snow showers toward sunrise. 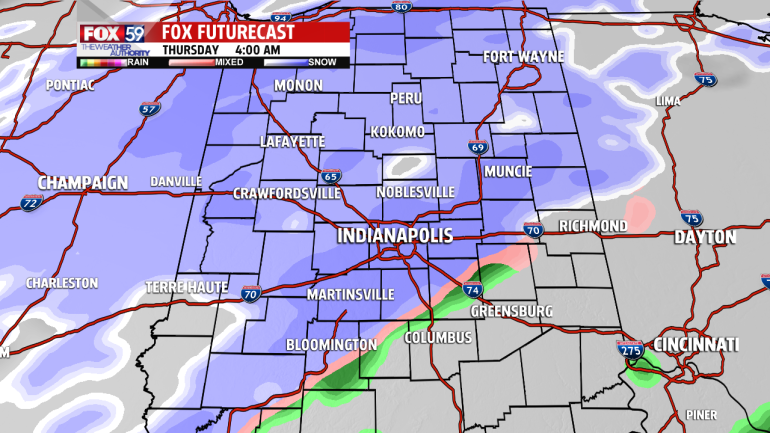 The coldest air of the season will follow this messy system and hit Thursday afternoon. Temperatures are falling through the day and will bottom out in the single digits for the first time since early January. The forecast low of 5-degrees will be the coldest of the season, beating the 8-degree low in November.  Combined with the wind, the wind chill on Valentine’s day morning could be as low as -15°. 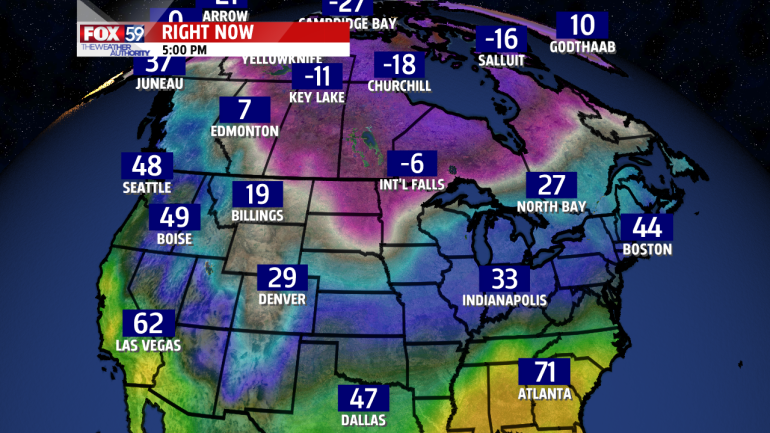 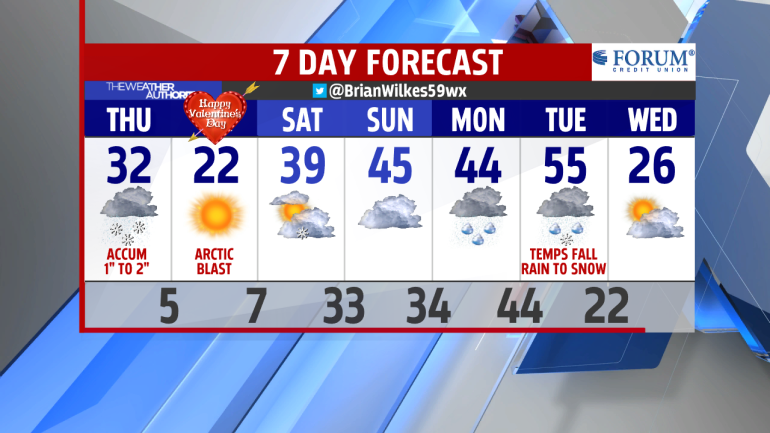 Strange day of weather and rewriting the weather books Wednesday; Freeze will ease and temperatures surge next week

The official snowfall in Indianapolis Tuesday was 2" setting a record for the date (April 20th) and it was the LARGEST snowfall so late in a season in 124 years! The 2" total ranked second largest only to 1897's 2.4".

It's a new record low! This morning our temperature in downtown dropped below 28°, beating the old record set in 1907, 114 years ago!

Icy patches could create a few headaches this morning, along with some power outages due to the weight of the heavier snow. A few extra minutes wouldn't hurt going out-the-door and be sure to grab a coat, as wind chills are in the teens.

How long does protection from COVID-19 vaccines last?

Earth Day was almost called something else entirely

It’s not too late to see the Lyrid meteor shower

Earth Day 2021: Here’s how NASA is studying the planet

Officer identified in fatal police shooting of Ma’Khia Bryant, 16, who attacked 2 with knife