Finally, a break from the chill Monday as temperatures reached the warmest levels here in over two weeks. The temperature topped 57 degrees in Indianapolis, the warmest since November 10. This November is still among the coldest on record, so the break was a welcome one.

We will remain milder tonight and Tuesday in advance of showers and the approach of a powerhouse storm that will be disruptive and problematic for travel before Thanksgiving. Temperatures are expected to remain mild through midnight Wednesday, ahead of an approaching cold front. 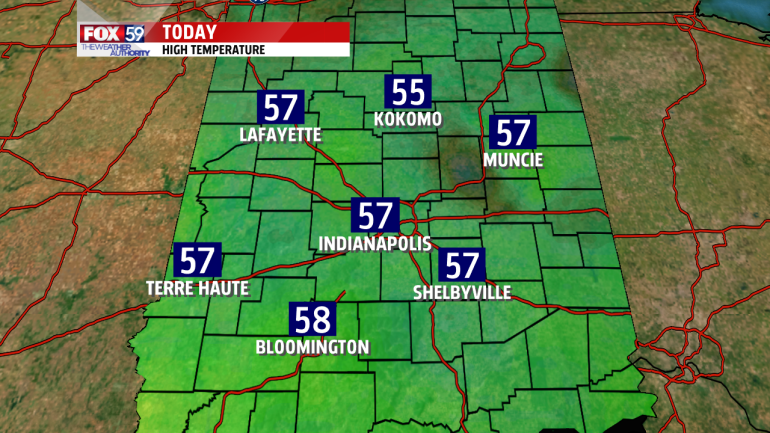 Showers are in the forecast Tuesday, but there will be plenty of hours to enjoy the mild weather. Showers will begin to increase later in the day, with the greatest threat of rain late Tuesday. South winds will allow area temperatures to remain well into the 50s beyond sunset and midnight.

A line of showers and potential thunderstorms will race into the state after midnight and ahead of a cold front. Rainfall will reach its peak coverage then of nearly 80%. The rain will end quickly from west to east, as colder and very windy weather moves in. 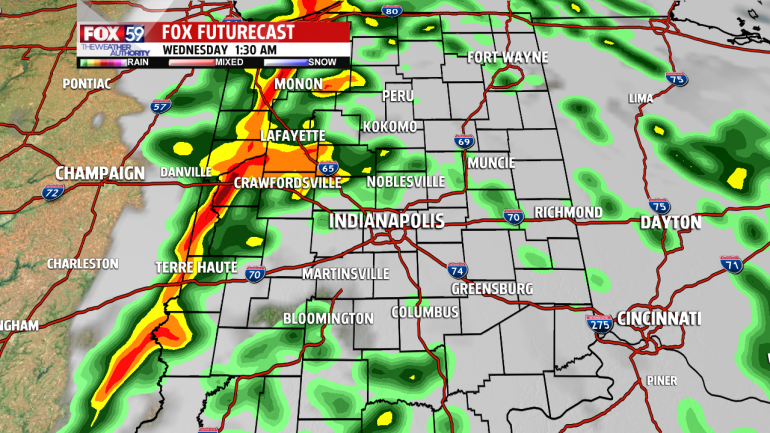 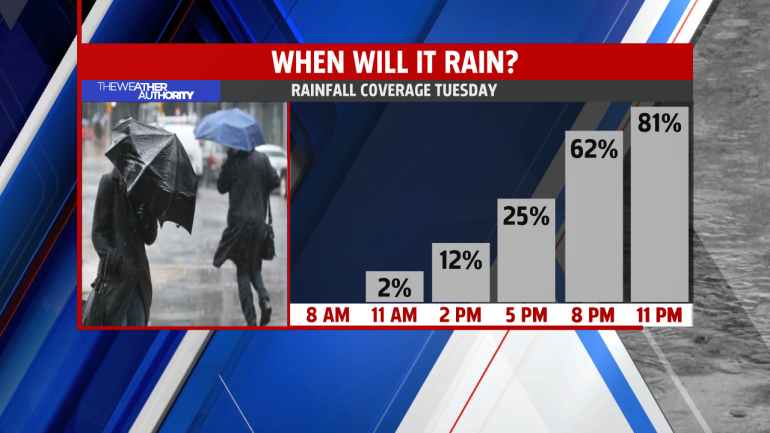 The long advertised, pre-Thanksgiving storm will impact holiday travel for much of the nation, with over a half-dozen states under some form of winter advisory. Snow totals could exceed one foot in portions of Minnesota and Wisconsin by noon Wednesday. 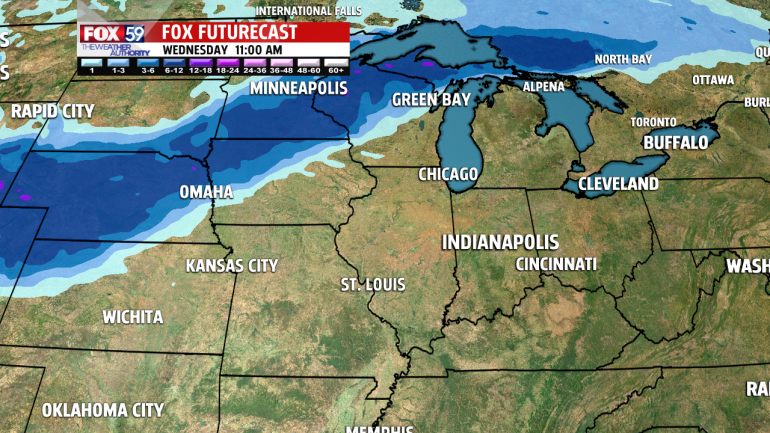 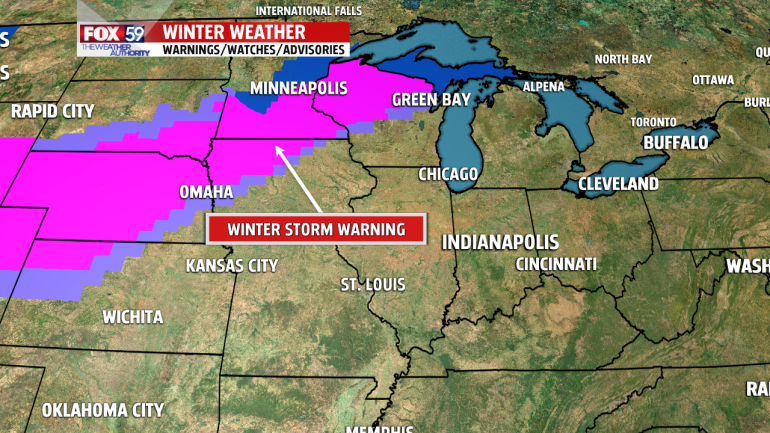 In addition to the snow, strong to severe storms are possible in the warm sector of the storm Tuesday, with a large portion of Missouri out-looked by the Storm Prediction Center for a “slight risk” of severe thunderstorms. 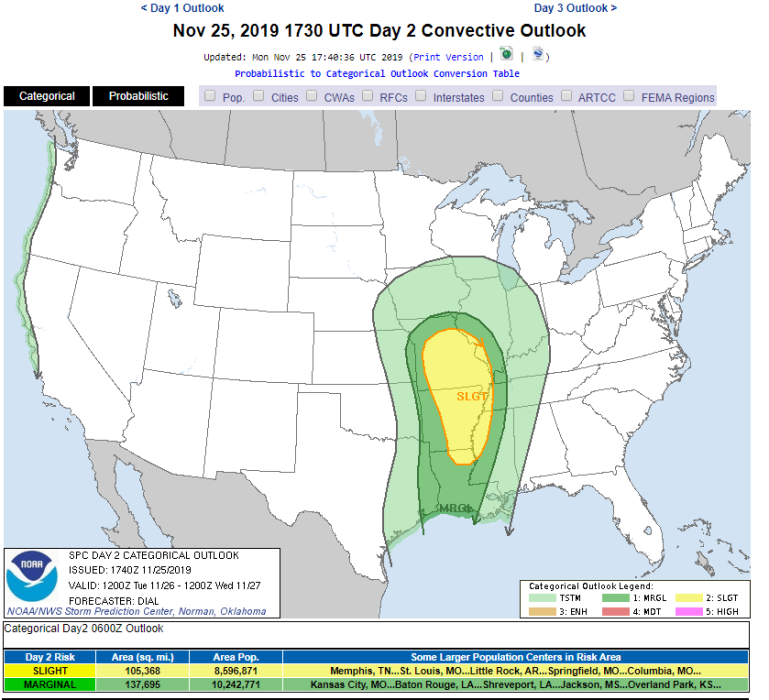 The storm’s central pressure will drop rapidly and create a large, expanding wind field that could be disruptive to many other travelers, with gusts exceeding 50 mph possible Wednesday. Several states, including Indiana, are under a High Wind Watch from 7 a.m. Wednesday to 7 p.m. Wednesday. 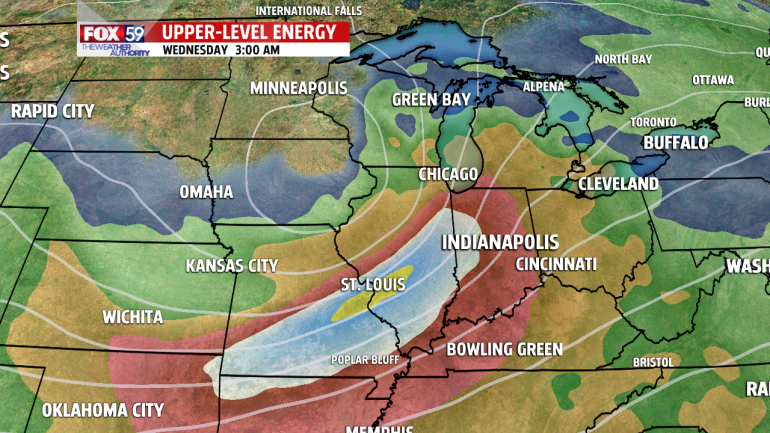 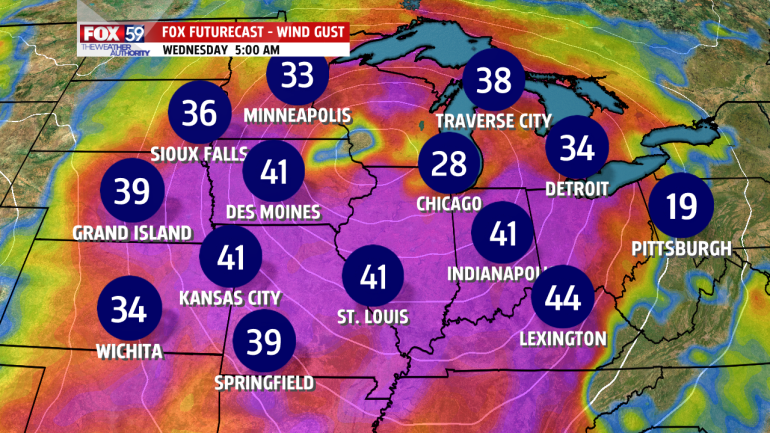 It’s looking more and more likely that a second and equally powerful and disruptive storm will take shape for the end of the long holiday for return travel Saturday and Sunday. The second storm will once again place central Indiana in the warm sector, with rain, wind and threat of t-storms before colder temperatures flood the state on gusty winds Sunday. At this distance, snow could stick Sunday evening. We’ll have more on this storm throughout the week. 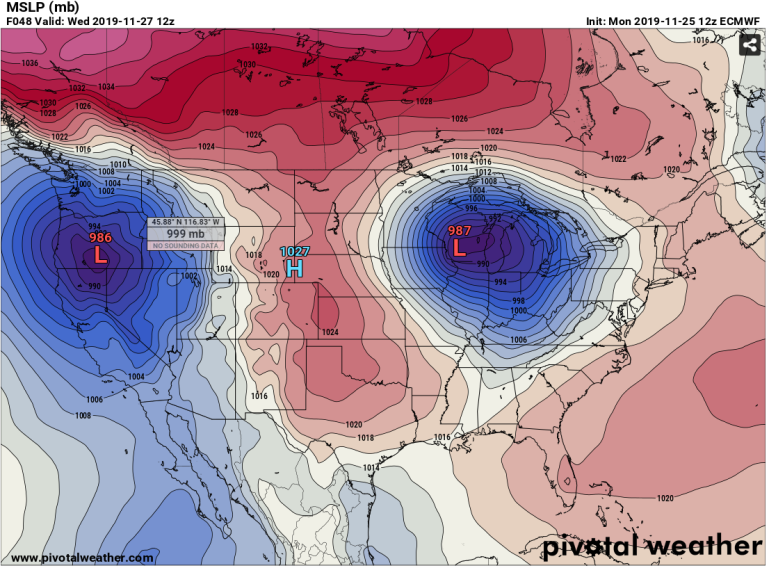 In between the two storms, Thanksgiving Day and Black Friday appear the be rather calm. Temperatures will be quite cold early Thursday, in the low-to-mid 20s and only reach 42° in the afternoon. This will be the fourth straight Thanksgiving below 50-degrees and likely the coldest since 2014. 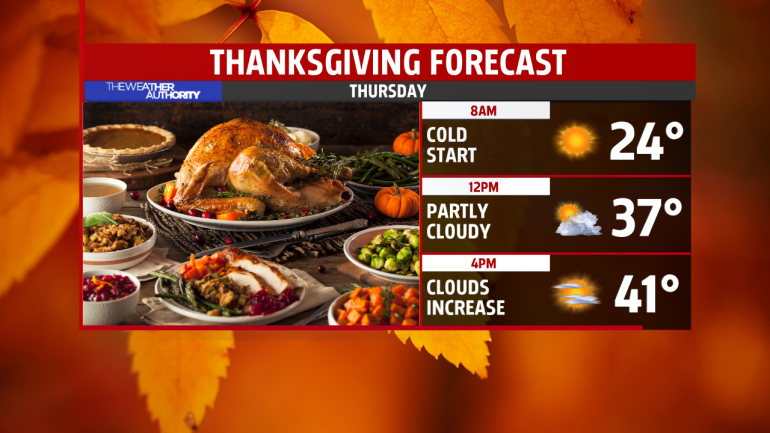 OMAHA, Neb. (AP) — A major winter storm dropped more than a foot of snow on parts of Nebraska and Iowa, disrupting traffic and shuttering some schools, while blanketing other parts of the middle of the country with snow that continued to fall Tuesday.

There were early closures of several coronavirus testing sites on Monday in Nebraska and Iowa, and both states saw 12 or 13 inches (30.5 to 33 centimeters) of snow in places by Tuesday morning. At least 4 inches (10 centimeters) of snow was expected into Tuesday across most of an area stretching from central Kansas northeast to Chicago and southern Michigan.

A misty and foggy start; tracking light snow for Wednesday

Gray skies, mist, and patchy fog will greet you on this Tuesday morning.

Up north, light freezing mist continues across several counties (White, Cass, Carroll, Grant and Miami), while a winter weather advisory remains until 1 p.m. Ice accumulations will be light but roads will be icy in spots, while temperatures hover in the lower 30s.

Our first wave of messy weather for this Monday has moved off to the east and another wave is set to impact us over the evening hours. Monday morning and early afternoon saw a variety of precipitation from rain, freezing rain, sleet and snow. The temperature of the air column and surface are key into what type you see. We'll see a variety again this evening as the second wave moves on through.

A Winter Weather Advisory has been extended until 9 AM Tuesday for the northern half of the viewing area. It has also been expanded to include Hamilton, Boone, Montgomery and Fountain counties. Fayette, Union and Wayne counties in east central Indiana remain under the advisory until midnight.

TSA: Rate of guns seized at airport checkpoints in 2020 up despite fewer travelers

TSA: Rate of guns seized at airport checkpoints in 2020 up despite fewer travelers