We’re on thunderstorm watch this evening as a complex of thunderstorms is expected to blow through the Midwest, bringing strong winds and large hail.

Scattered showers and thunderstorms are projected to develop later Monday night in southeast South Dakota and northeast Nebraska. This will come together and become better organized in northern Iowa early Tuesday morning. 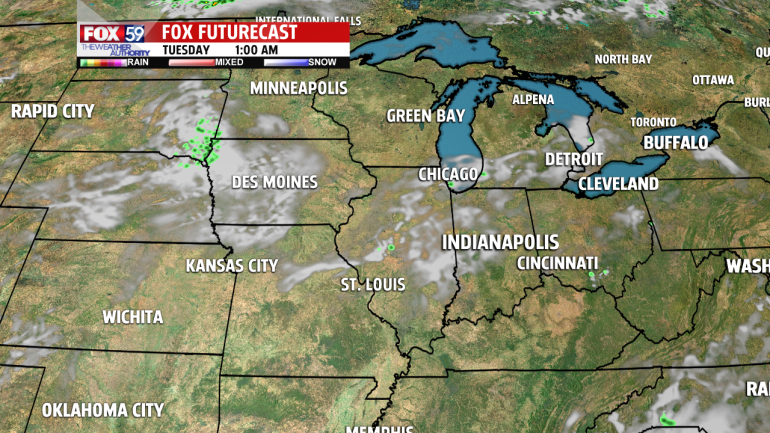 The complex of thunderstorms is expected to dive southeast through Iowa and into Illinois by late morning.

High-resolution computer models suggests the complex becomes bow shaped, indicating strong winds as the main threat. The path of wind may be wide and sustained for several hundred miles. 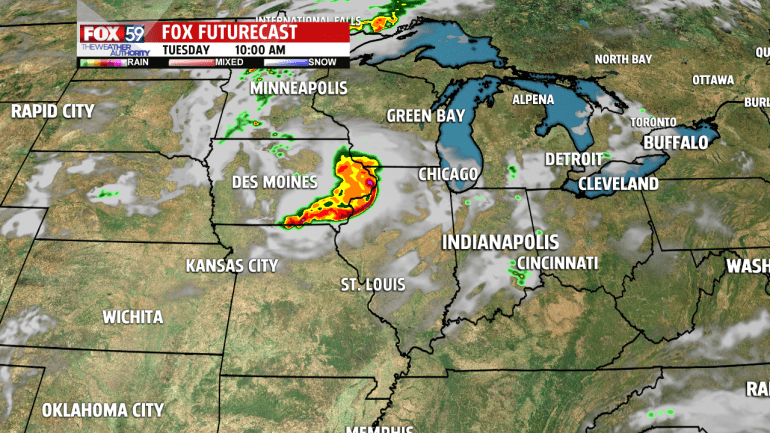 The exact path of the complex is yet to be determined. There are some thoughts that the complex could dive southeast and pass through central Indiana during the afternoon. 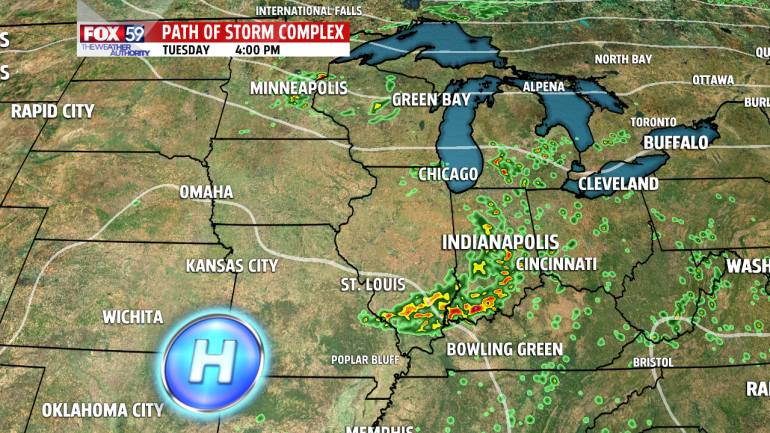 After taking a closer look at forecast data, I think the complex could end up moving more south/southeast, bringing the worst of the storms to southern Illinois and extreme southwest Indiana. My reasoning behind the further south track is due to a mid-level ridge in the atmosphere. Thunderstorm complexes often like to hug the periphery of the ridge. Computer models are beginning to suggest the ridge moves a little further to the west, which would allow for a more southern track.

The same thing happened with thunderstorms late Monday, August 12, into early Tuesday, August 13. There was a chance for a complex of thunderstorms to move through central Indiana during the overnight hours. The storms rode along a warm front and dove further south.

Due to the uncertainty of the actual track, you should check back for the latest forecast. Once the complex develops and starts to move southeast, we should get a better idea as to where the complex is going. Jim O’Brien will have updated looks starting at 4 a.m. on FOX59. You can also follow me on Twitter @johndissauer for additional information through the night and Tuesday morning. 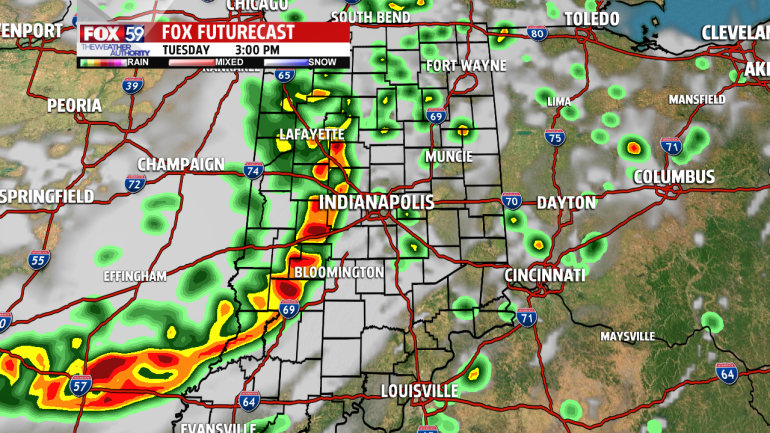 Bottom line: Know that there is the potential for damaging wind to pass through central Indiana Tuesday afternoon. It appears the window for it arriving in the Indianapolis metropolitan area is between 2 p.m. and 4 p.m.

After some early morning showers, Saturday has shaped up to be a fantastic day. Temperatures this afternoon peaked in the mid 50s and we had plenty of sunshine around.

Clouds will increase this evening ahead of our next chance for rain. This one will pack more of a punch, bringing moderate to heavy rainfall to portions of the southern half of the state. Even a few rumbles of thunder will be possible overnight. We stay dry for the early evening hours as temperatures remain very mild for this time of year.

Light rain showers traveled over the area last night with enough rain to wet the pavement. Rain totals from the wave on Friday night were low and generally stayed below 0.2” for most locations.

There will be many dry hours to enjoy this Saturday in the wake of that activity. Cloud cover will decrease with sunshine back into the mix this afternoon. Highs will reach into the mid-50s, which is 10 degrees above the normal high in late February!

Warming up again to end February, rain chances on the rise

Clouds streaming in from southern Indiana arrives nearly area-wide by late day and showers were not far behind. The northeast bound showers were light before the evening commute but will increase in coverage after sunset.