Update (9:45 AM): Air temperatures are beginning to climb above freezing at this hour, which will limit the rain/snow mix risk at first… The precipitation is also filling into area and approaching downtown Indy. The wave of rain will become more widespread around central Indiana by midday, which is when we should see more of the rain turn over to light snow. There is going to be more support for minor snow accumulation for locations in east-central Indiana. Around 1″ of snow could stick in spots near the Indiana-Ohio border. 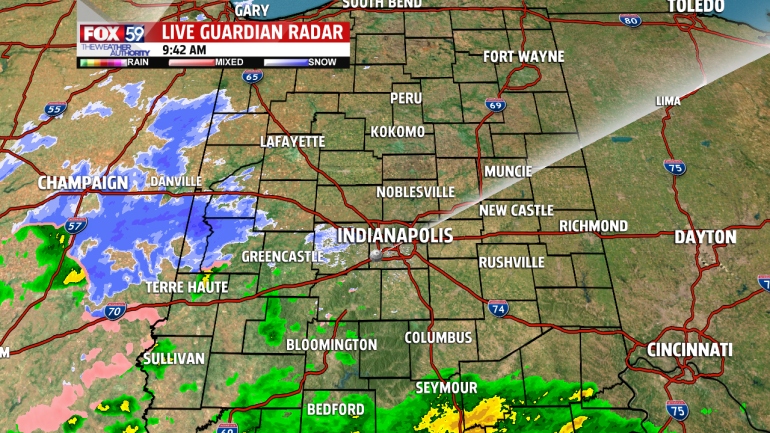 Heavy frost has formed on grass and vehicles this Saturday morning as temperatures dropped below freezing around central Indiana. Skies are becoming mostly cloudy ahead of an approaching system. We’re going to have a taste of winter today, especially this afternoon as rain turns to a wet snow late in the day. Temperatures are going to stay mainly in the 30s due to the wintry precipitation and cloud cover, falling nearly 10 degrees below average for November 23. 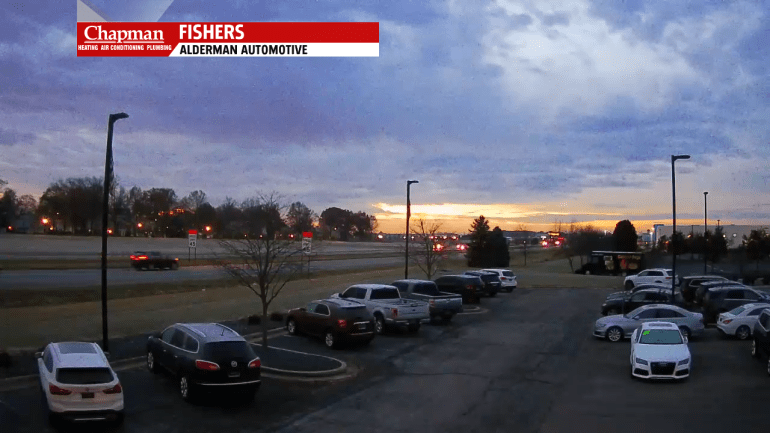 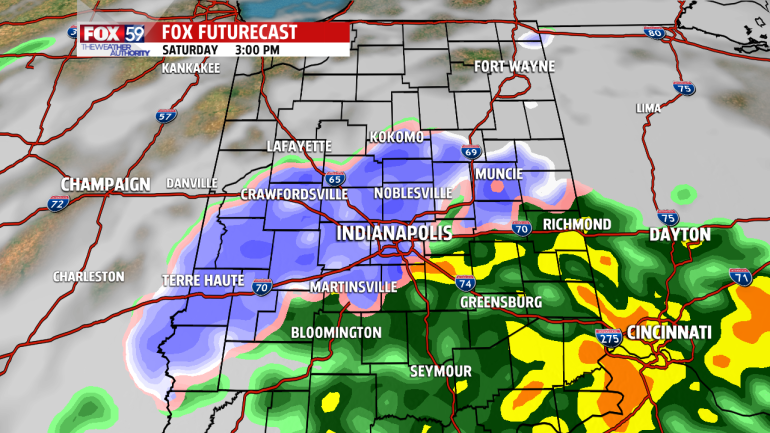 Snow accumulation is minimal at best for much of central Indiana. There is a zone east and northeast of downtown Indianapolis that could have some snow stick to the ground. Forecast models are hinting that a snow band could develop near the Indiana-Ohio border. Most totals will stay below the 1” mark around the area. However, around inch could fall over east-central Indiana. Isolated higher totals cannot be ruled out. 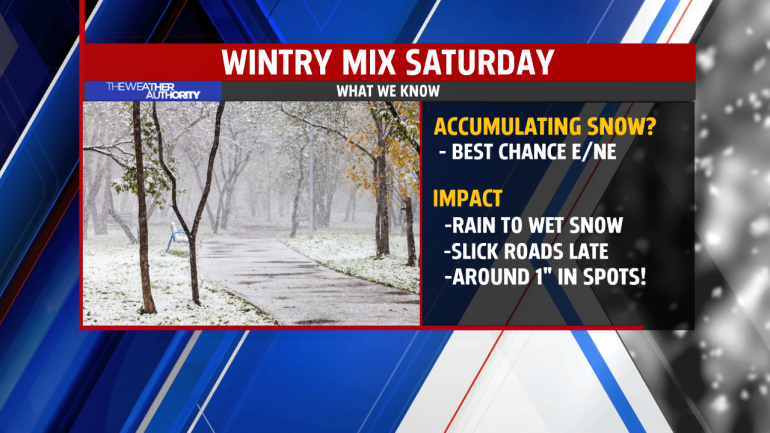 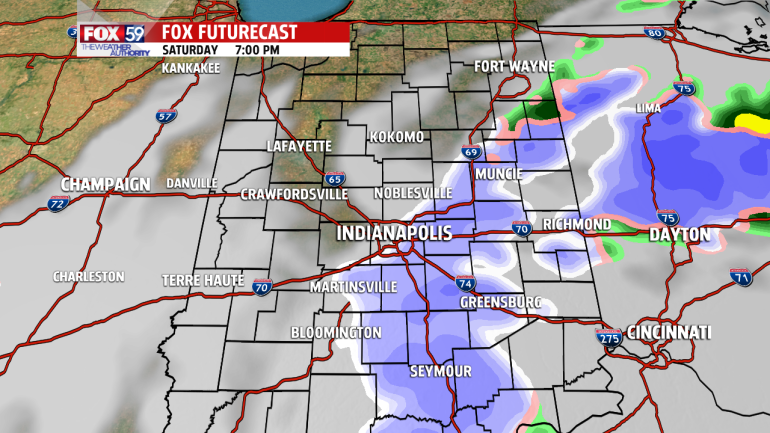 Most of the activity is going to exit by 9-10 PM as skies turn mostly cloudy overnight. Lows are going to dip down into the mid to upper 20s tonight, which may result in the moisture at the surface to refreeze. Slick spots are possible tonight and early Sunday, so it is important to use caution if you plan to travel! 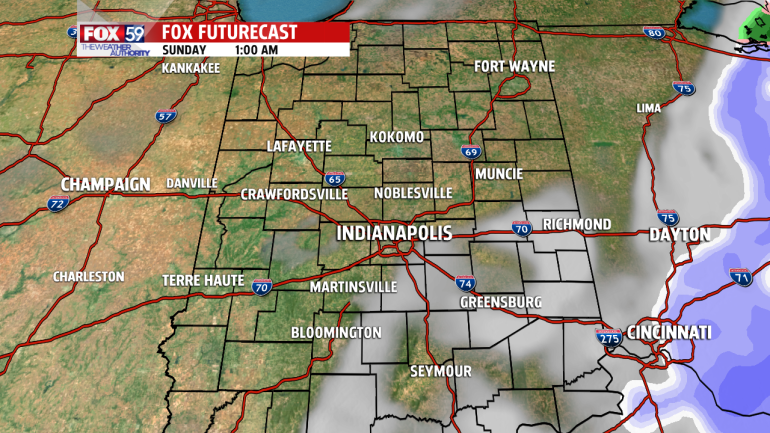 Big improvements are expected as we head into Sunday. Highs tomorrow will be more seasonal and should reach into the mid-40s. We will also end the weekend on a dry note with a partly sunny sky. 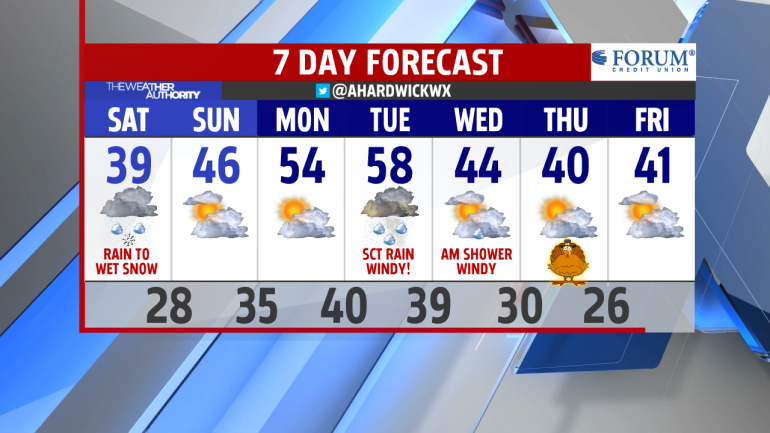 It was a very soggy start to Sunday. Heavy rainfall spread across the state, with the highest totals falling in locations south of I-70. Bloomington picked up over an inch and a half of rain!

The snow melt earlier this week along with the heavy rainfall today has caused some flooding issues in parts of central Indiana. The photos below were shared by Bartholomew County Sheriff Matt Myers Sunday afternoon. You can see a car is trapped on a flooded road.

Heavy rain fell across parts of central Indiana last night along a passing warm front. The heaviest totals have been reported south of Indianapolis so far with Bloomington receiving nearly 1.50” of rain. Shelbyville has also had more than an inch! The initial wave of rain will push east of the area later this morning.

Watch for flooding and ponding on the roads if you’re traveling this morning. The recent snowmelt and heavy rain that occurred last night has prompted the National Weather Service to issue a Flood Advisory through 2 p.m. over south-central Indiana.

After some early morning showers, Saturday has shaped up to be a fantastic day. Temperatures this afternoon peaked in the mid 50s and we had plenty of sunshine around.

Clouds will increase this evening ahead of our next chance for rain. This one will pack more of a punch, bringing moderate to heavy rainfall to portions of the southern half of the state. Even a few rumbles of thunder will be possible overnight. We stay dry for the early evening hours as temperatures remain very mild for this time of year.