Areas of fog have developed overnight and it is thick in isolated locations across central Indiana. Dense fog appeared in Muncie, Columbus and Terre Haute with the visibility dropping near a quarter of a mile at 7 AM. Patchy fog will be possible during the predawn hours and the visibility should improve as the sun rises. Freezing fog is possible for the towns with temperatures at or below 32 degrees. 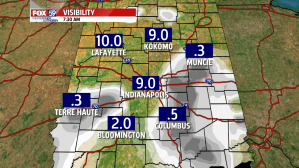 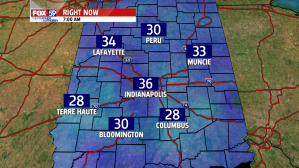 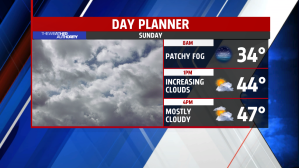 The day will start bright, but a cloud deck off to our west will move into Indiana later today. Skies will become partly sunny this afternoon and they will turn overcast tonight. The increasing clouds and light northerly wind will result in cooler temperatures this Sunday. Indianapolis climbed to 52 degrees on Saturday. Today, highs will rise near 47 degrees, which is still unseasonably warm for early January! 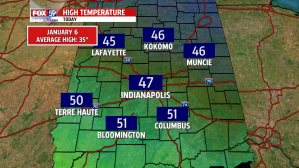 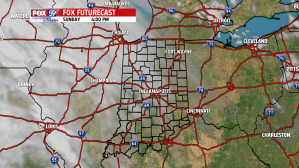 Kids waiting at the bus stop Monday morning should be good to go, but they will want to have a rain jacket or umbrella for the trip back home! Our next wave of steady rainfall arrives midday Monday.  The system will not only bring rain, but windy conditions and mild air! Southerly winds may gust near 35 MPH Monday afternoon as temperature soar into the upper 50s. 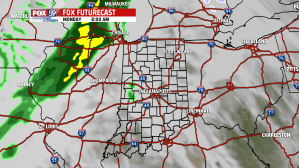 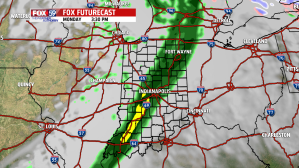 Two cold fronts will travel over the state early in the work week. The first surface boundary will move over us Monday evening with the second one arriving on Tuesday. Temperatures will drop a bit on Tuesday and even more by Wednesday! A more seasonal weather pattern sets up midweek with highs in the mid-30s. 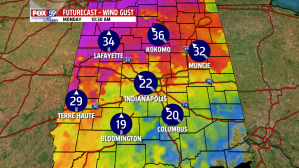 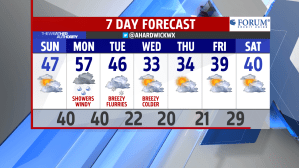 Today will mark our fifth straight day of sunshine and dryness! Although slightly cooler, sunshine holds and seasonal temperatures prevail across the state.

A heavier coat will be needed out-the-door but plenty of sunshine to be enjoyed!

Despite a drop in the temperatures, it was another stunning day in central Indiana with nearly 100% sunshine. Nearly you ask? If it were not for a few clouds drifting by early this morning, we captured them from our camera at Daniel's Vineyard in Geist, this would have been three completely cloud-free days in a row.

Despite those few brief clouds, it is still the sunniest stretch of weather here in exactly three years! The last time we deemed skies this clear over a three-day span was March 2nd, 3rd, and 4th of 2018!

A pullback in warmth, but dry stretch rolls on

The passage of a cold front overnight is bringing a change-up in our temperatures for today, as the wind direction has switched back to the north.

We are replacing one stable air mass with another stable air mass but from a different region. This second air mass is cooler but more sunshine is anticipated, along with additional dry conditions!

Car slams into home on near northeast side before taking off

1 year since Indiana’s first documented COVID-19 case: Hoosiers reflect on how their lives were impacted

While You Were Sleeping: Coronavirus updates for March 5

IMPD: 1 shot and killed on near northeast side

Why Indiana’s justice reform bill may become a model

Indianapolis leaders ‘sleeve up’ to increase confidence in COVID vaccine

Strong 379,000 jobs added in hopeful sign for US economy

Car slams into home on near northeast side before taking off

1 year since Indiana’s first documented COVID-19 case: Hoosiers reflect on how their lives were impacted

While You Were Sleeping: Coronavirus updates for March 5