For the second straight day, we broke the record high temperature for the date. Despite increasing clouds, a south breeze elevated temperatures to late April-levels and smashed a record that has stood for only one year. Monday's record high of 67° surpassed the 2019 record of 62°.  The high Monday was 30-degrees above normal and the normal high for April  25. Some other notable highs included 71-degrees in Columbus and Bloomington and 72° just after 5 p.m. in Bedford.

How rare is this air? On average, we get a 67-degree high or warmer around the first week of March. The earliest was January 1, 1952, while we waited until April 17 in 1881. But what is even more stunning is we checked the record books and found this is only the third time on record that the temperature topped 67° (or warmer) in the first week of February. The last time was 1962 with a high of 67° on February 4. The only other time was also February 4 with a record high for the date of 69°. 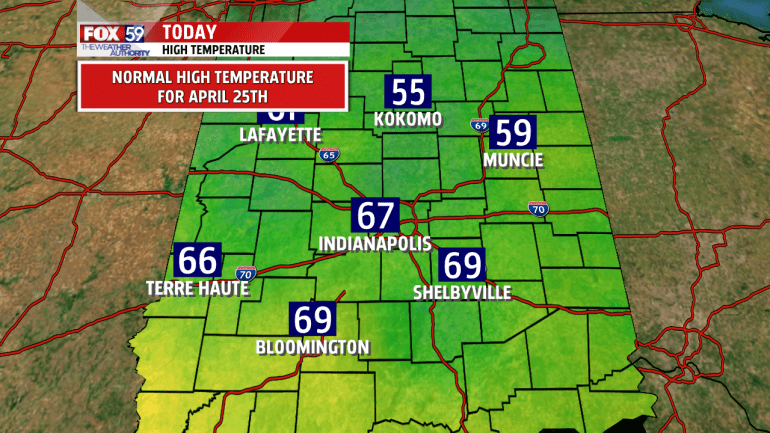 There is a decided change to colder air coming, and it begins in the pre-dawn hours Tuesday as a wind shifting cold front passes. This will be a slow process as the front settles, not sweeps across the state. The slow moving front will stall, leaving colder air in place as moisture rides north from southern Indiana.

Brace for the colder temperatures and damp conditions out the door Tuesday morning. Things will become more dicey if not icy as the colder air takes hold starting Tuesday night. A period of light freezing rain, sleet and rain is likely to develop as temperatures slip to and below freezing Tuesday evening.

The front is expected to stall and provide the focus for a new wave of moisture to ride in from southern Indiana.  At this time, some ice and snow accumulation could create hazardous travel starting Wednesday evening. I'm posting below the probability of a 1" snowfall and the probability if .10" ice accumulation. We are monitoring trends in timing and intensity and will keep you up to date. 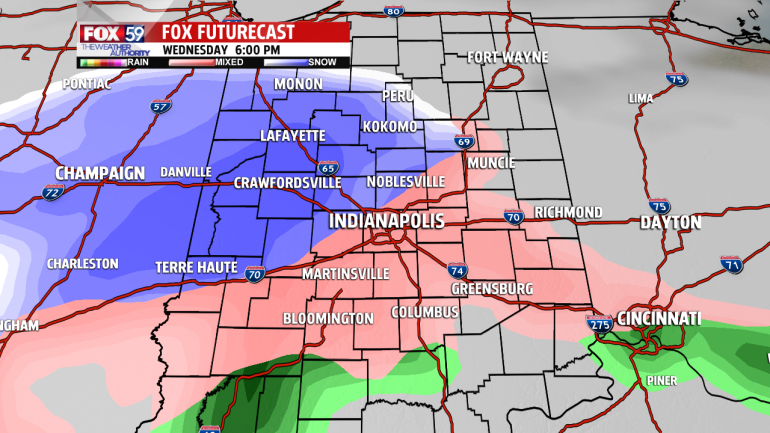 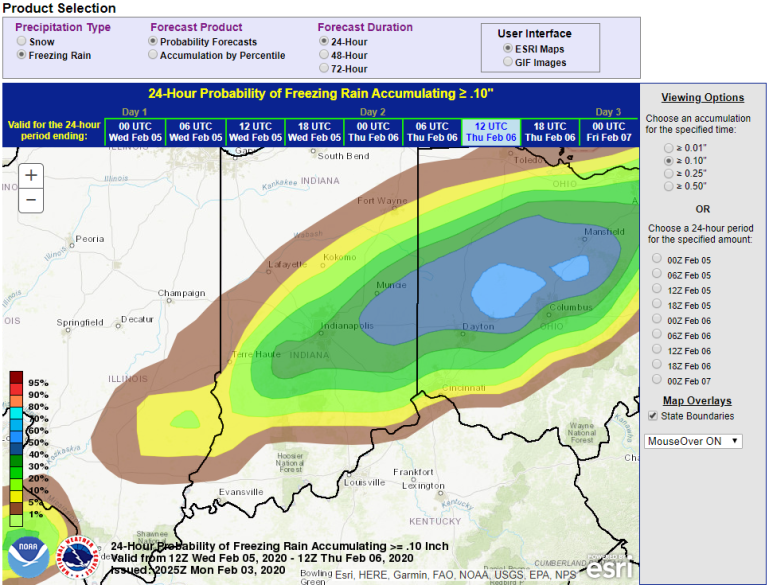 Remain weather aware this evening as we are monitoring the potential for strong to severe storms. After another very mild, sunny day, a strong cold front will sweep across the state, kicking up showers and thunderstorms out ahead of it.

The timing on this system brings a line of storms into the state just after the 7 O’clock hour Wednesday evening and moves it out of here by midnight. Our wind shift has lowered the dew point from the slightly humid conditions we were at on Tuesday and we'll see an even bigger drop by tomorrow morning, after this next cold front brings a much drier airmass to the area.

In just 4 years, those in Indianapolis will have the opportunity to gaze their sights upon an a spectacle that won't have taken place in the city for 819 years! We're talking about a total solar eclipse. Just a few years ago, many were scrambling to find safety gear in order to be able to watch a partial eclipse that passed through the area. The day ended up being a let down for many as clouds blocked the view the experience of a partial eclipse and a total eclipse are vastly different anyway.

The total eclipse will be visible in Mexico, the central US and east Canada, with a partial eclipse visible across North and Central America.

Overnight storms weakened before reaching downtown, after producing large hail in northern Indiana and throughout the Great Lakes Region. For now, dry weather is holding and mild conditions will, yet again, start another incredible morning.

Plenty of sunshine on the way (again) today and our third day in a row of 70s or warmer. Highs today will near 80° by 4:00 pm, as dry weather holds through the early evening. ENJOY today's weather, as colder air arrives overnight!

Hospitals prepare for the COVID-19 surge by building remote facilities

Beyond the symptoms, doctor breaks down what COVID-19 does to the body

Hospitals prepare for the COVID-19 surge by building remote facilities