Scattered showers and thunderstorms are tracking over the northern tier of Indiana this Sunday morning. Much of central Indiana is dry, but more clouds are building into our northern counties with this approaching wave of rainfall. The complex of rain is entering a drier atmosphere, and the shower activity will likely weaken and break apart as it pushes toward Indianapolis. Areas north of Indy will have a chance for occasional showers through midday. 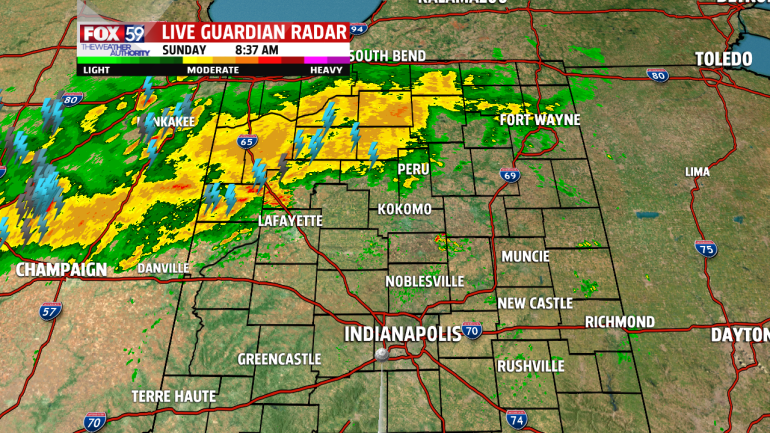 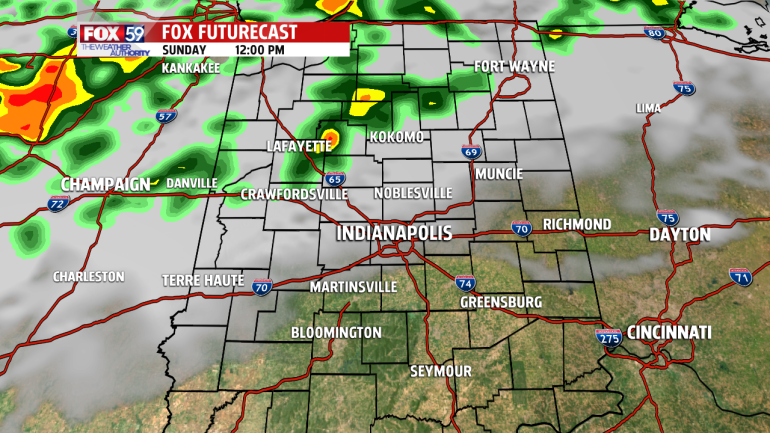 Highs are going to rise into the lower-to-mid 80s this afternoon. Expect much warmer weather over the southern half of the state because those locations will see more sunshine today. Skies will be partly sunny near Indianapolis with a forecast high near 86°. The average in Indianapolis for September 15 is 78°. 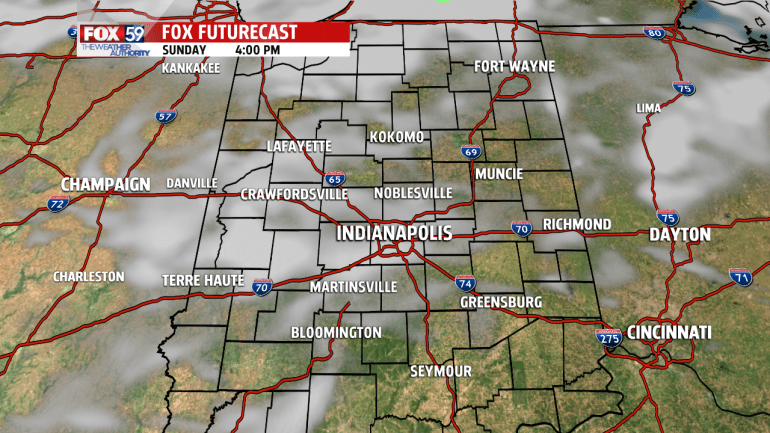 An isolated shower will be possible tonight and early Monday morning. However, cloud cover will decrease Monday afternoon, and temperatures will rise even more compared to the weekend. 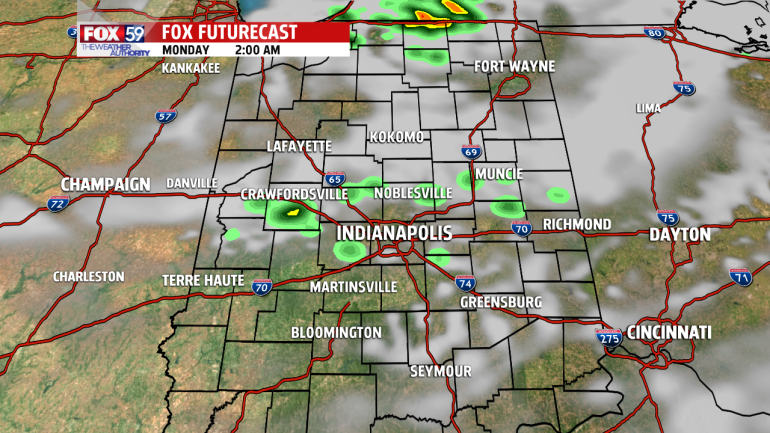 Rain chances will remain low over the next several days, which will continue to dry out the area. Indianapolis has only received 0.01” so far this month. The dry soils will help temperatures soar in the days ahead. Highs could even bump into the 90s at times this work week! 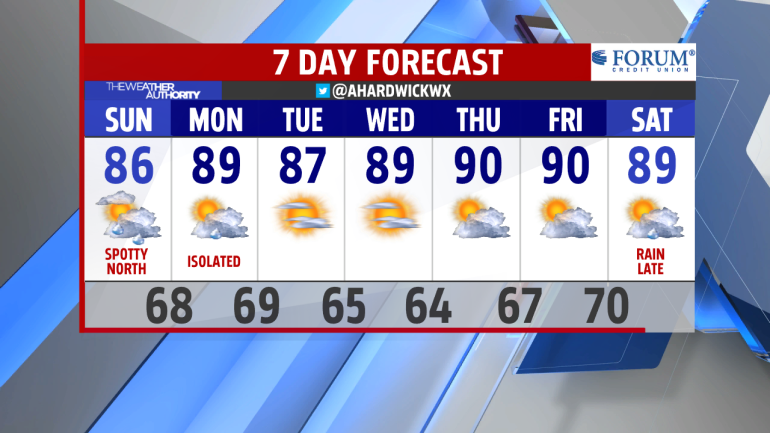 Humberto is still a tropical storm as of Sunday morning and producing sustained winds at 60 mph. The storm is now north of the Bahamas, and it is expected to move away from the southeast United States. It has strengthened over the last 24 hours and should continue to gain strength as it pushes into the Atlantic. Humberto should turn into a Category 1 storms early in the work week. 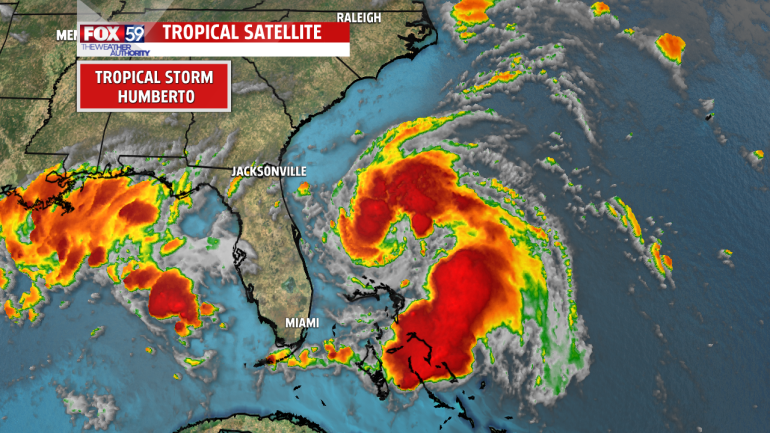 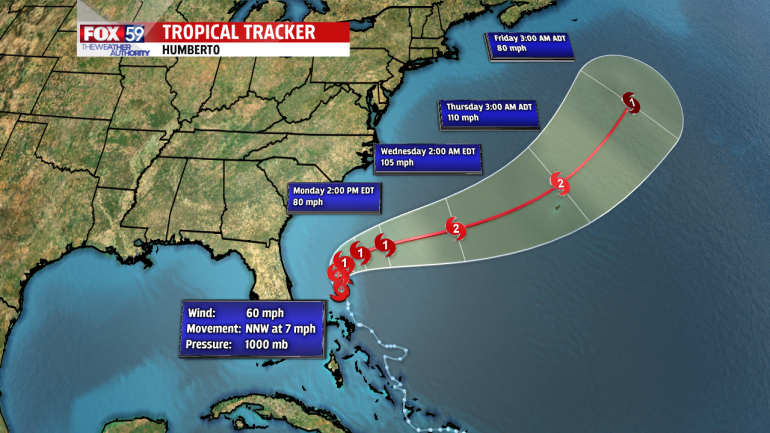 Another chilly night; warming trend into the weekend

What a Wednesday! Temperatures early Wednesday dropped to the coolest we've seen since mid-June. While Indianapolis fell to a cool 54°, many surrounding cities dropped into the 40s.

The coolest start since mid-June; quiet pattern holds through the workweek

Indianapolis had temperatures in the mid-50s this morning, making it the coolest morning in 51 days! Back on June 15, Indy dropped to a low of 50°. Skies are mostly clear and you may even need a jacket before heading to work or school this morning! Lows this morning are running about 10 degrees below average for August. The weather for today looks great and comfortable too!

There could be scattered clouds at times, but much of the day looks pleasant with plenty of sun. Temperatures this afternoon will climb into the mid-70s with a high of 76° in Indianapolis. The air around high pressure moves clock-wise and since an area of high pressure is west of Indiana, light winds will stream out of the north through the afternoon.

While You Were Sleeping: Coronavirus updates for August 6

IMPD searches for woman who crashed car into east side pond, fled scene

One of Hamilton County’s first paramedics hangs up his uniform

Dreasjon Reed’s family receives autopsy report: ‘No way you can do that to somebody’s kid and be OK with it’