Right on schedule, afternoon showers and thunderstorms developed in pasts of central Indiana  The broken line extended from east to west in a line from near Dayton, Ohio west to Champaign, Illinois just after 6:30 pm.  A few heavy downpours occurred but mos the of the rain was rather selective along the southeast bound line.

Rainfall was feast or famine with at one point nearing one inch at our studios on the northwest side with nothing reported at the airport.  High level of humidity, an approaching cold front aided in the storm development and the blinding rainfall.  A severe thunderstorm warning was issued on a storm in Hendricks county with potential 50+ mph wind gusts possible.  Below the image from the Crew Car wash in Avon as the storm approached and the radar scan of wind velocity detected over 50 mph just after 6:30 PM.

In just a matter of minutes the storm would weaken and only bring a heavy downpour. 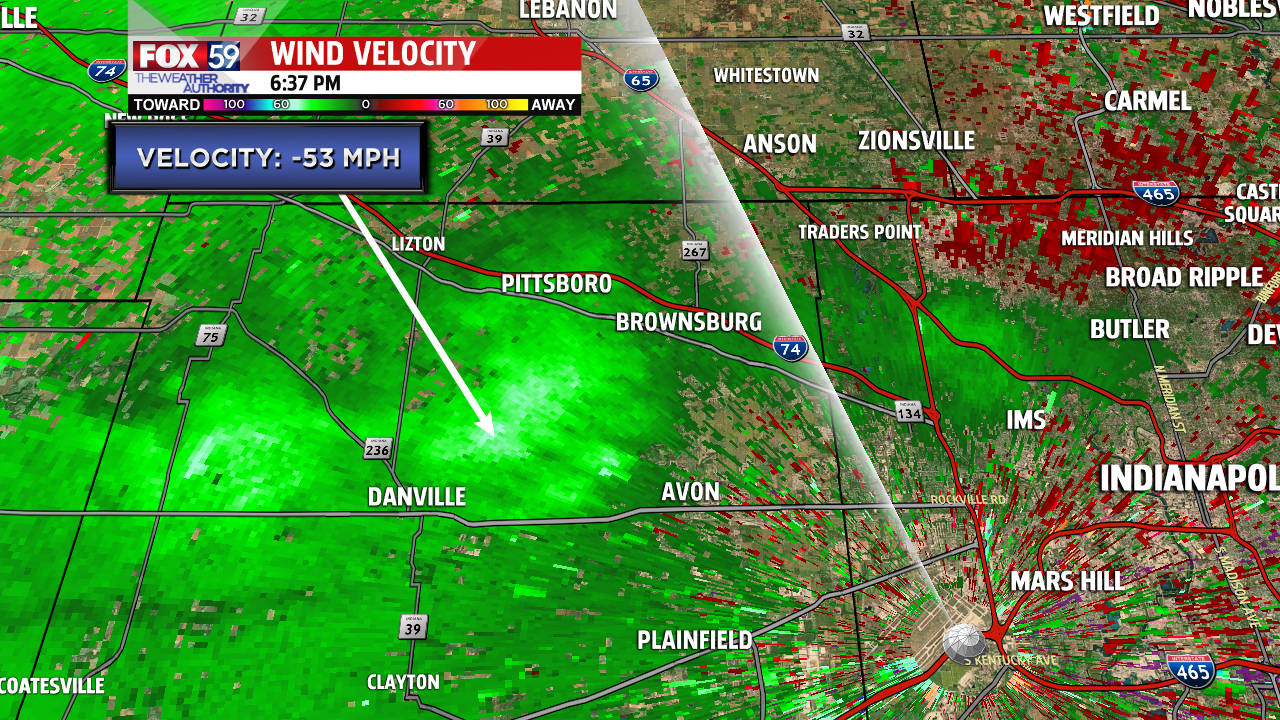 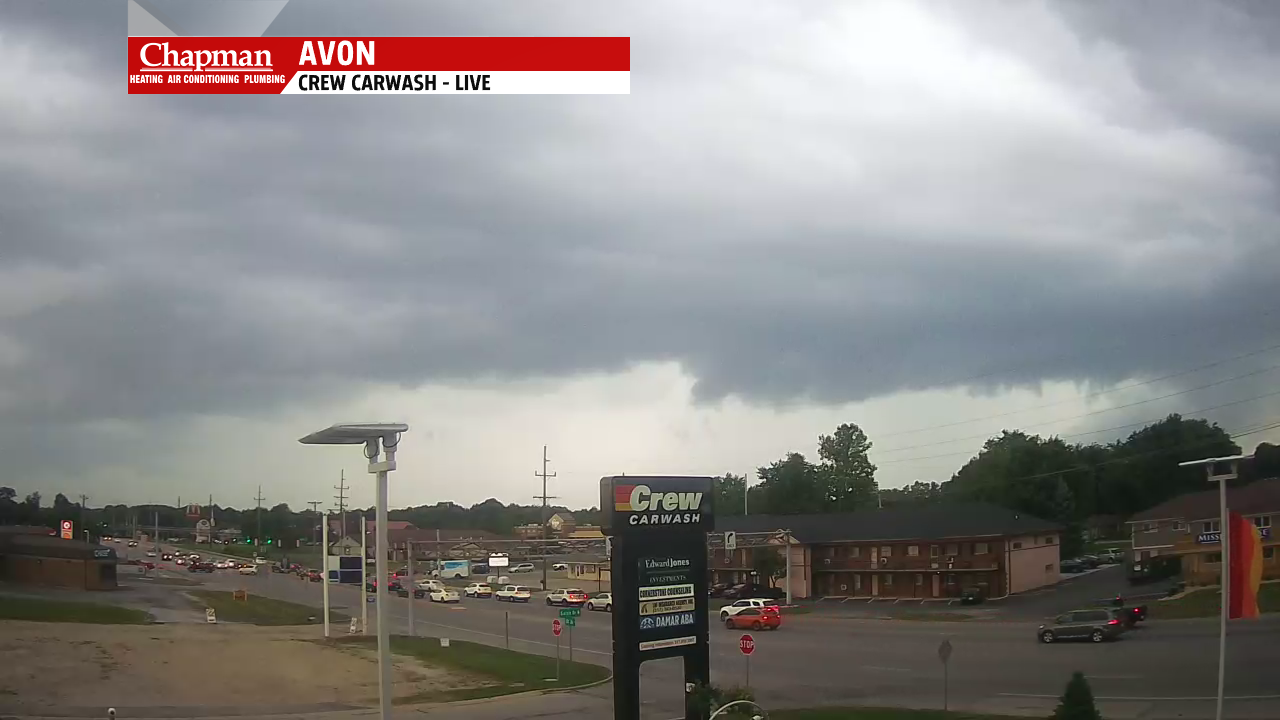 Additional storms were heavy in and around downtown Indianapolis with gusty winds and we received our first measurable rainfall of the month.  Below note the selective nature of the rainfall and how the amounts varied from 1″ totals to nearly nothing. 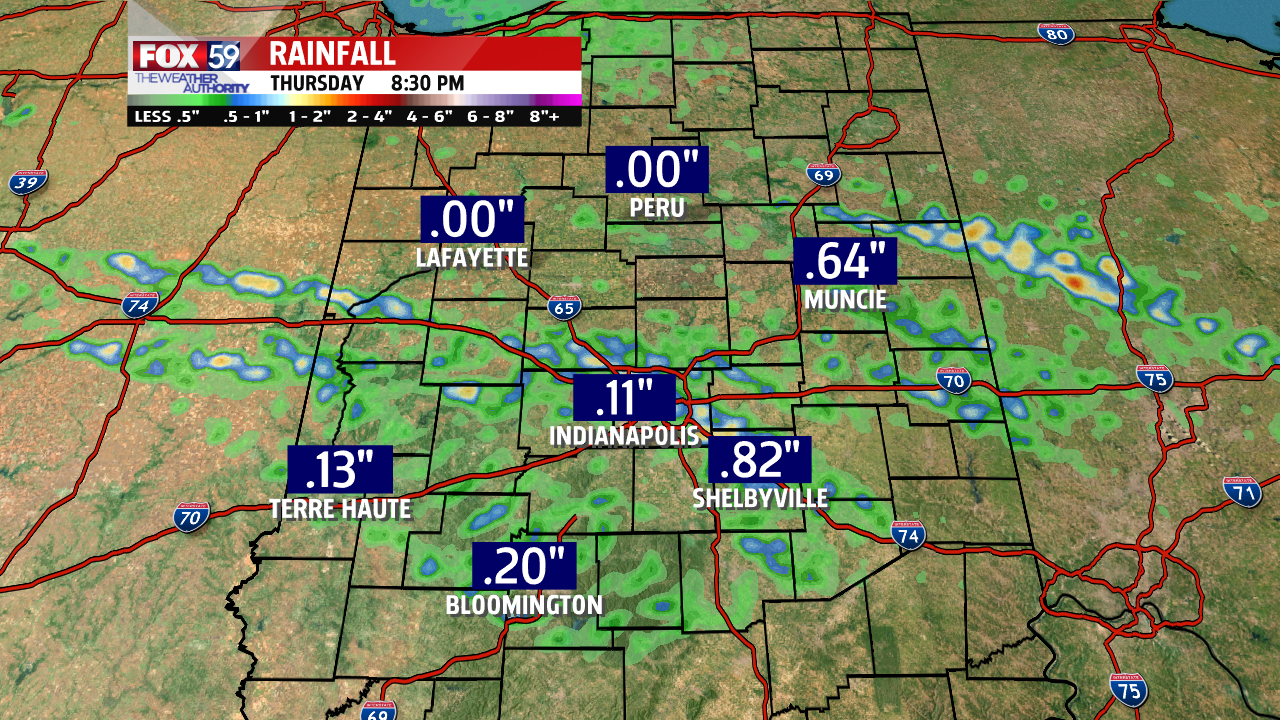 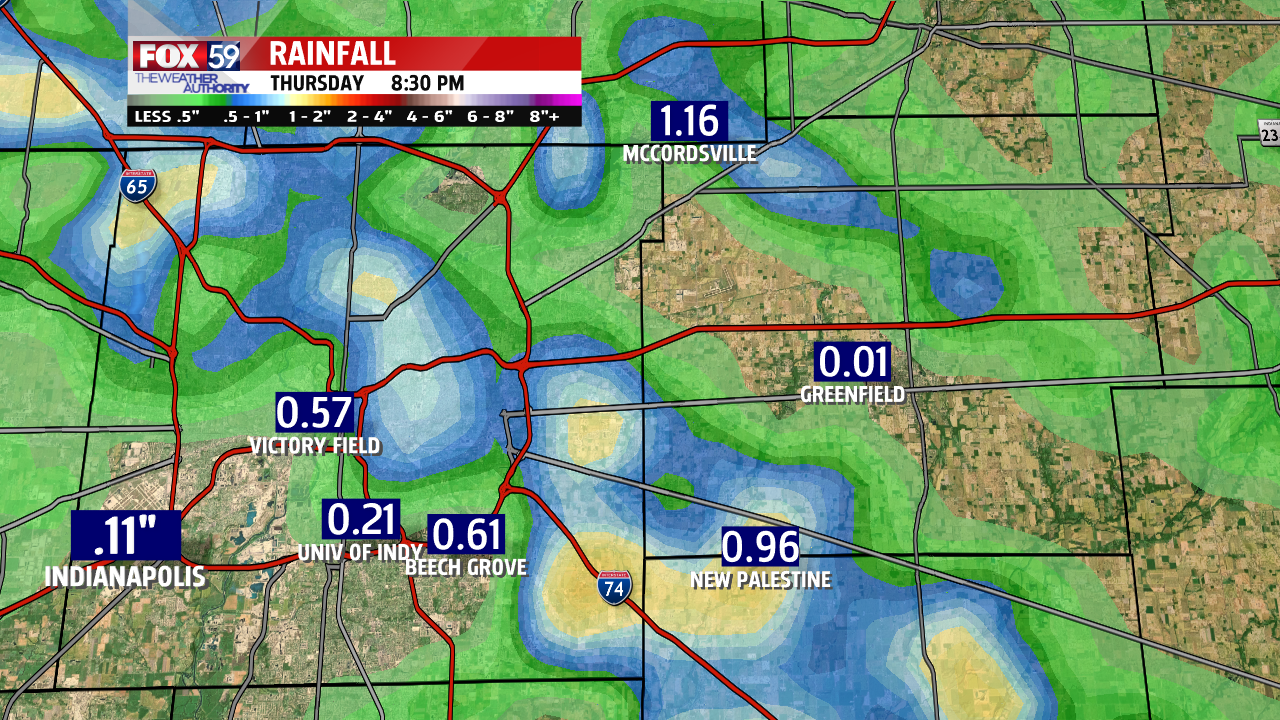 Late day many locations did not receive the beneficial rainfall and show a deficit approaching one inch below normal for the month of August.  Thursday afternoon the Drought Mitigation Center released an update report on the state of Indiana showing that ‘abnormally dry’ conditions have doubled to now over 33% of the state. 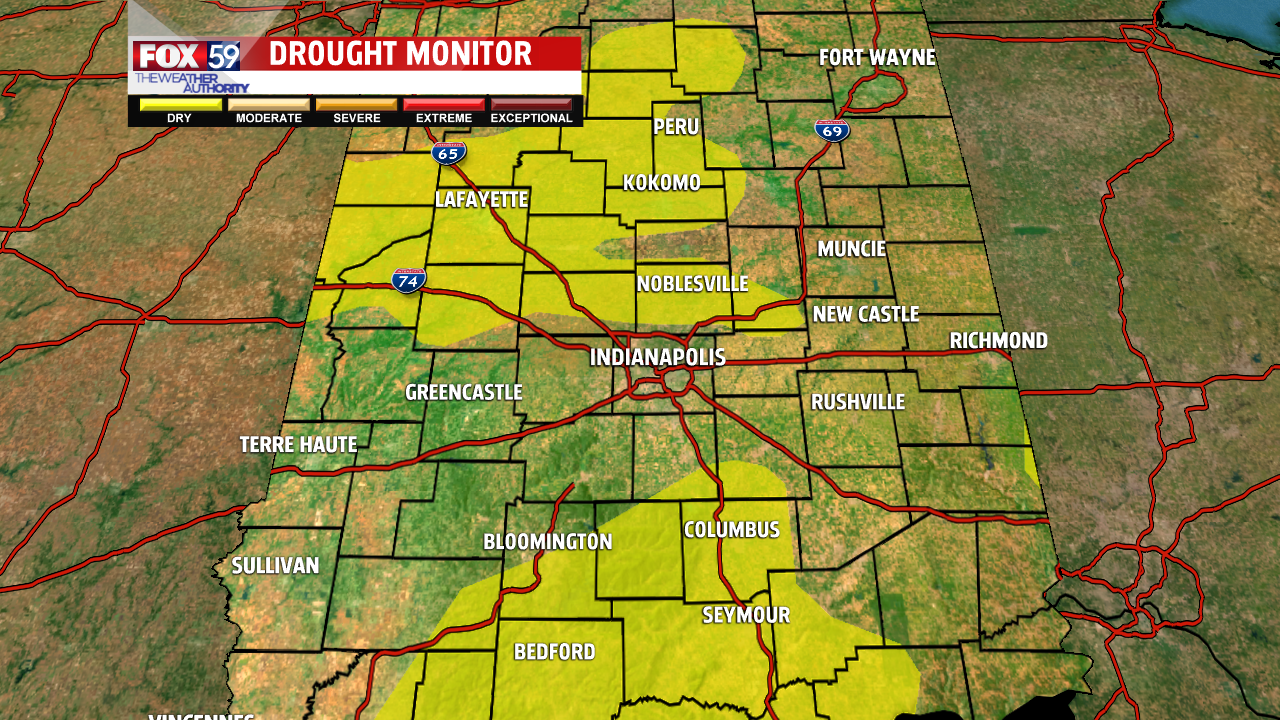 The rain and storm threat will linger through 12 am and diminish as a cold front sweeps the state.  The highly humid air will be swept away as the front settles near the Ohio river by sunrise Friday. 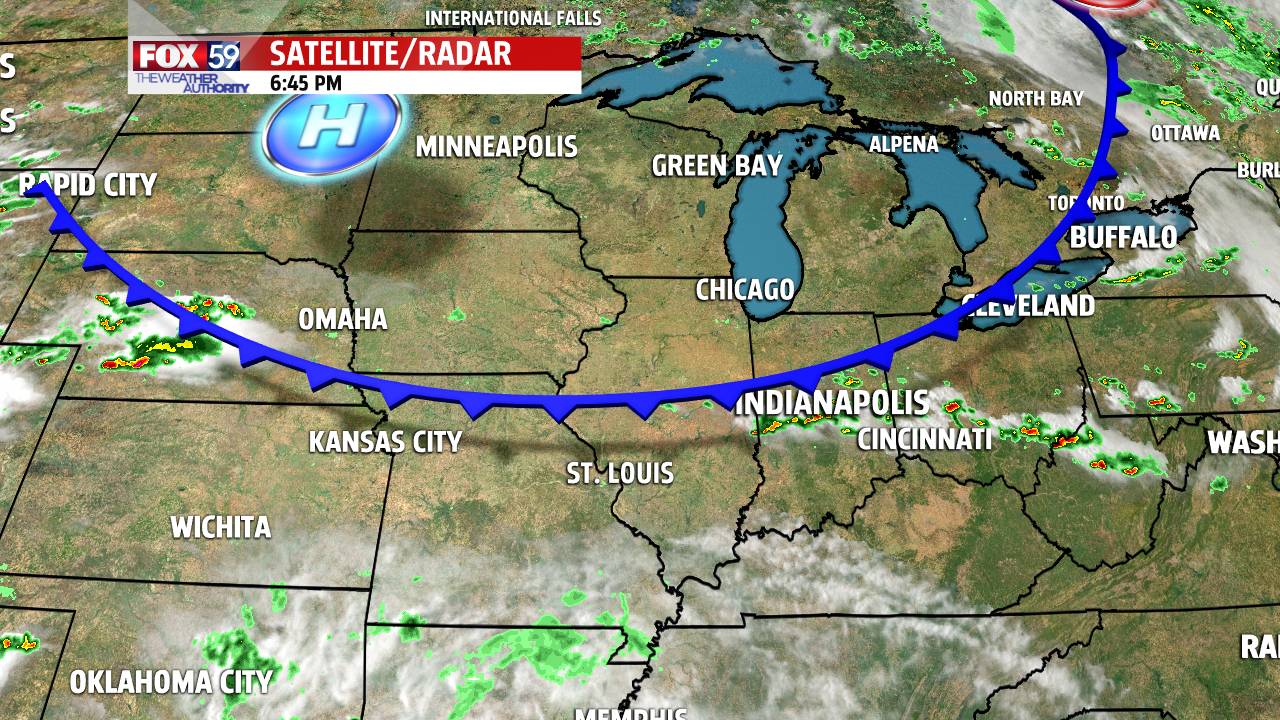 August has opened on a warm streak with each afternoon topping 87° or higher with the exception of the first day of the month.  Thursday the official thermometer fort hr city topped 90-degrees for the first time in over two and half weeks.  That brings the total for the season to 15 days.  The average is 19 per year. 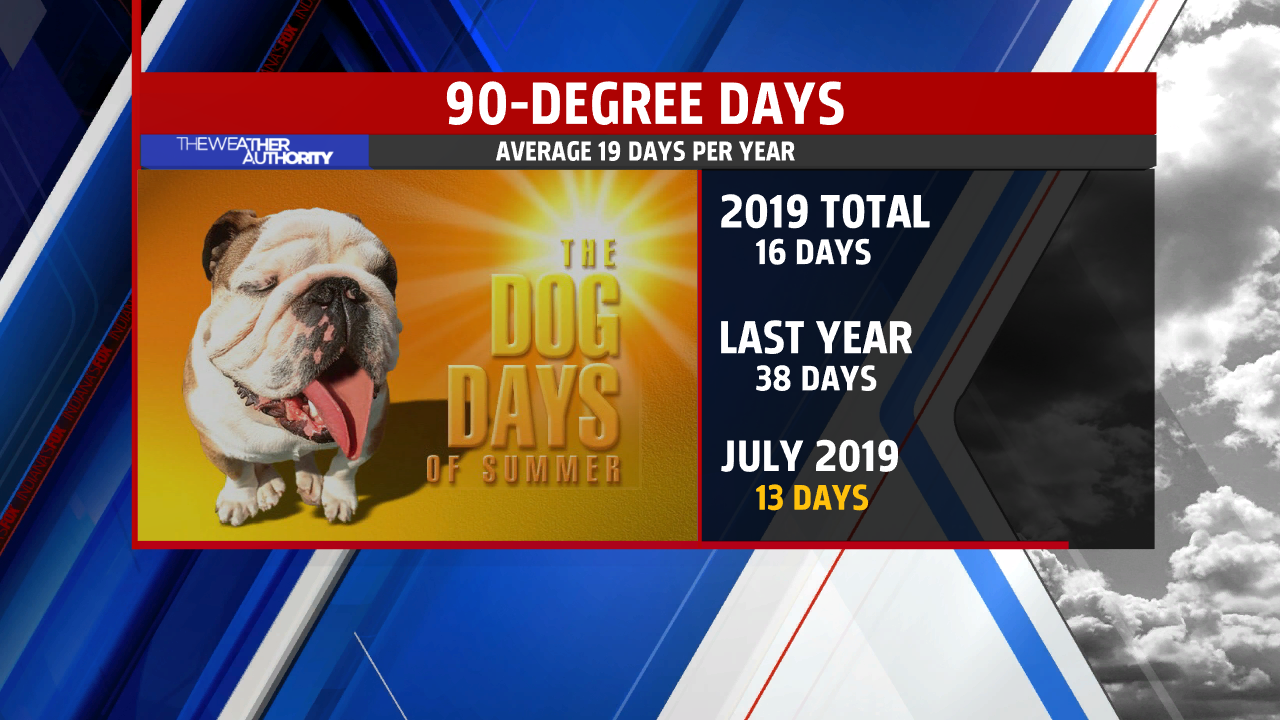 This is only the 15th August ever to open with no measurable rain throughout the first eight days.  The rainfall was selective on Thursday and if you did not receive a drenching downpour or two – the rain thereat is still quite small and for the next several days.  In fact, the next best threat of area-wide rainfall will not arrive until late Monday night and Tuesday. 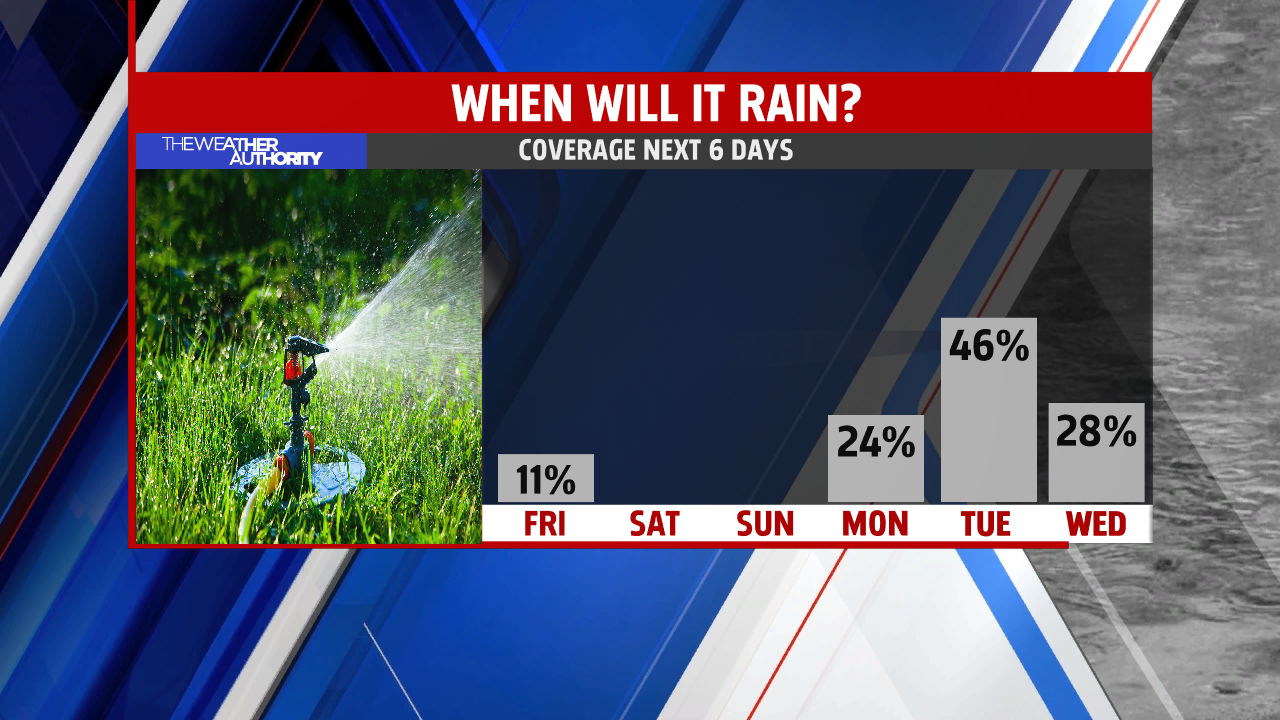 Another 90° day is on tap this Fourth of July! Indy reached 91° on Friday and it was the fifth time the city made it to 90° this year. There will be many more opportunities to hit 90 in the days ahead as the hot stretch continues across central Indiana! The humidity is also going to increase this week. The combination of the heat and humidity will result in uncomfortable weather conditions, especially next Wednesday and Thursday.

If your plans take you outside this holiday, be mindful of the heat! Highs will climb into the lower 90s today with heat indices potentially rising to 95° during the late afternoon. We have had to add a limited storm chance for the afternoon due to the hot and humid conditions. You shouldn’t cancel any outdoor plans, but it is important to keep an eye on the sky after 1 PM. Lightning and an isolated heavy downpour could be possible with any storm that “pops up” today.

The official thermometer for the city reached 91° Friday marking the 5th time this year. On average there will be 19 days that reach or exceed 90° in Indianapolis and some nearby cities are almost there. Shelbyville, Lafayette and Muncie have had more than a dozen days reaching 90.

Heating up this holiday weekend; some pop-up showers possible

A heatwave is underway in Indianapolis! Highs are going to climb near 90° through the holiday weekend and well into next week. The humidity levels are going to stay in check for the next couple days but it will too rise and become uncomfortable by Monday.

A high pressure system nearby the Ohio Valley will help keep the area dry for today. It will be a great day to head to the pool with skies staying mostly sunny through the afternoon. Just remember to apply and reapply sunblock if you’re going to be outside. Sunburn may occur in 15 minutes with the UV Index at a 9 around noon.

Speedway hopes fans will celebrate brickyard in their back yard

How to prevent mosquito bites this summer

US issues guidelines but no new rules for safe air travel