October 2019 has established itself as the sunniest months o far this year with over 60% the possible sunshine.  Entering the month, we had only had two completely clear days, July 12th and August 12th.  The preliminary report states Monday was the third day in the past week completely clear. 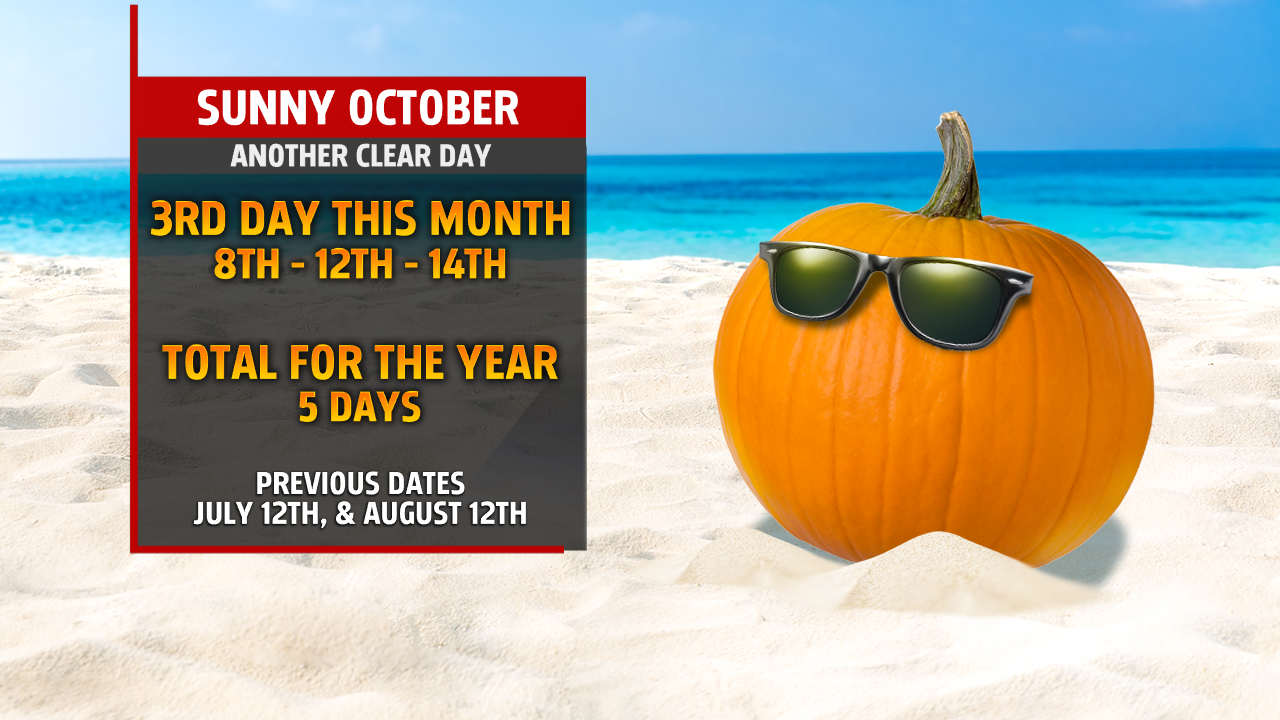 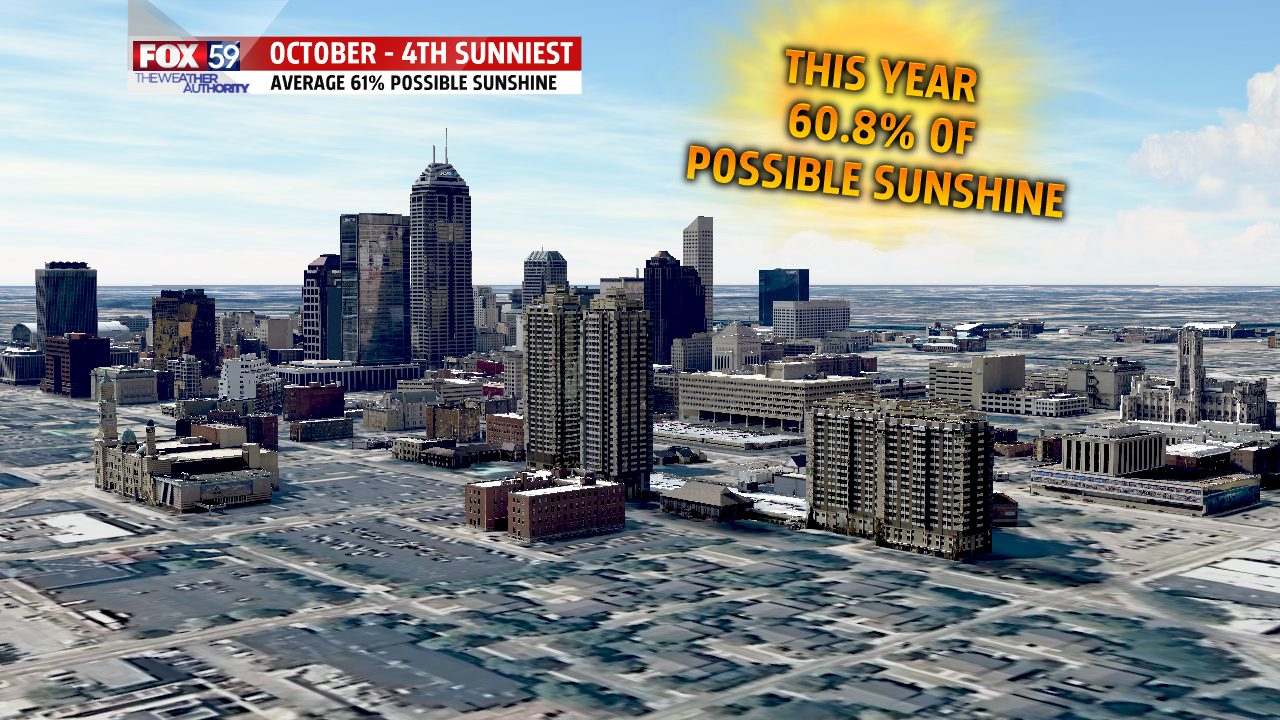 The autumn rainfall deficit has grown to over -3.50″ in Indianapolis and more rain is really needed.  The dry conditions will get some relief as a cold front nears late Tuesday.  Ahead of the front, warm winds will blow elevating temperatures to over 70-degrees Tuesday afternoon.

Clouds are quickly returning by mid morning then rain will follow.  The threat for rain will increase late day reaching over 60% coverage between 8 pm and 11 pm.

A storm or two could be in the mix bringing locally heavy rainfall totals.  AS of this evening the average off several machines for rainfall in Indianapolis is .33″ with a range from .15″ to .55″.  The larger spread is a reflection of the convection that may be involved later in the day before the front passed.  Should any thunderstorms develop they are not likely to be severe. 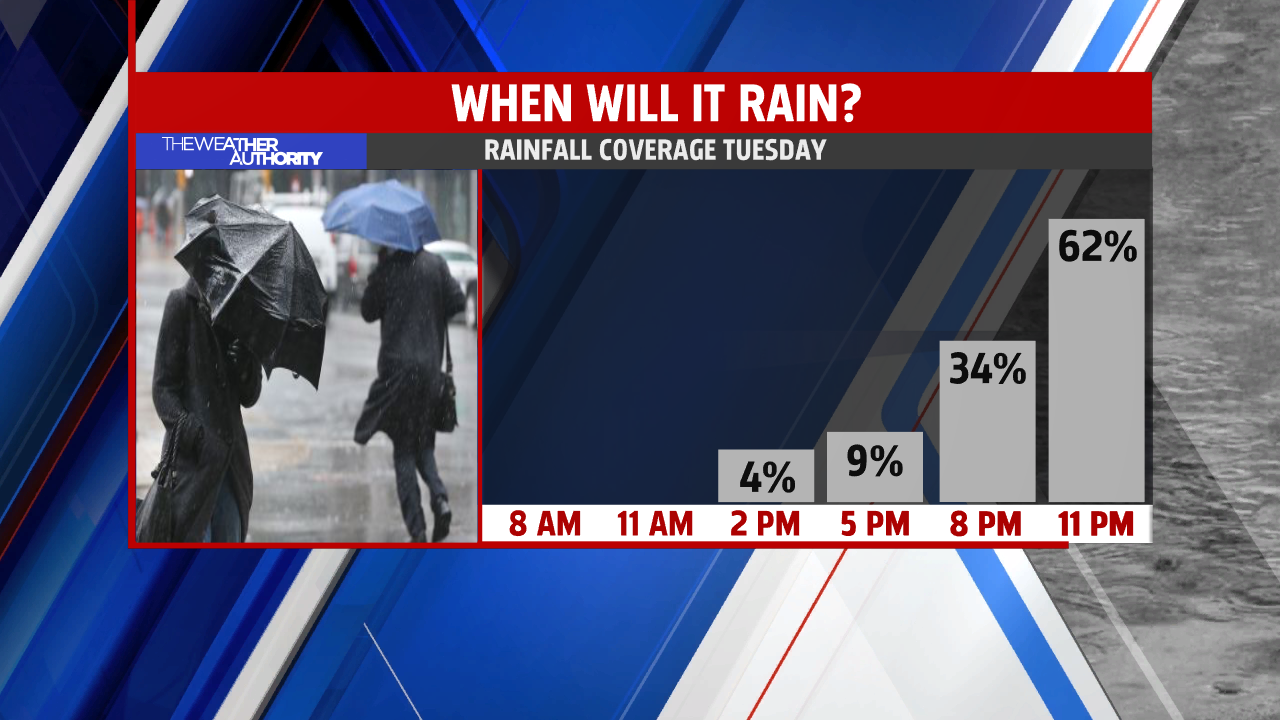 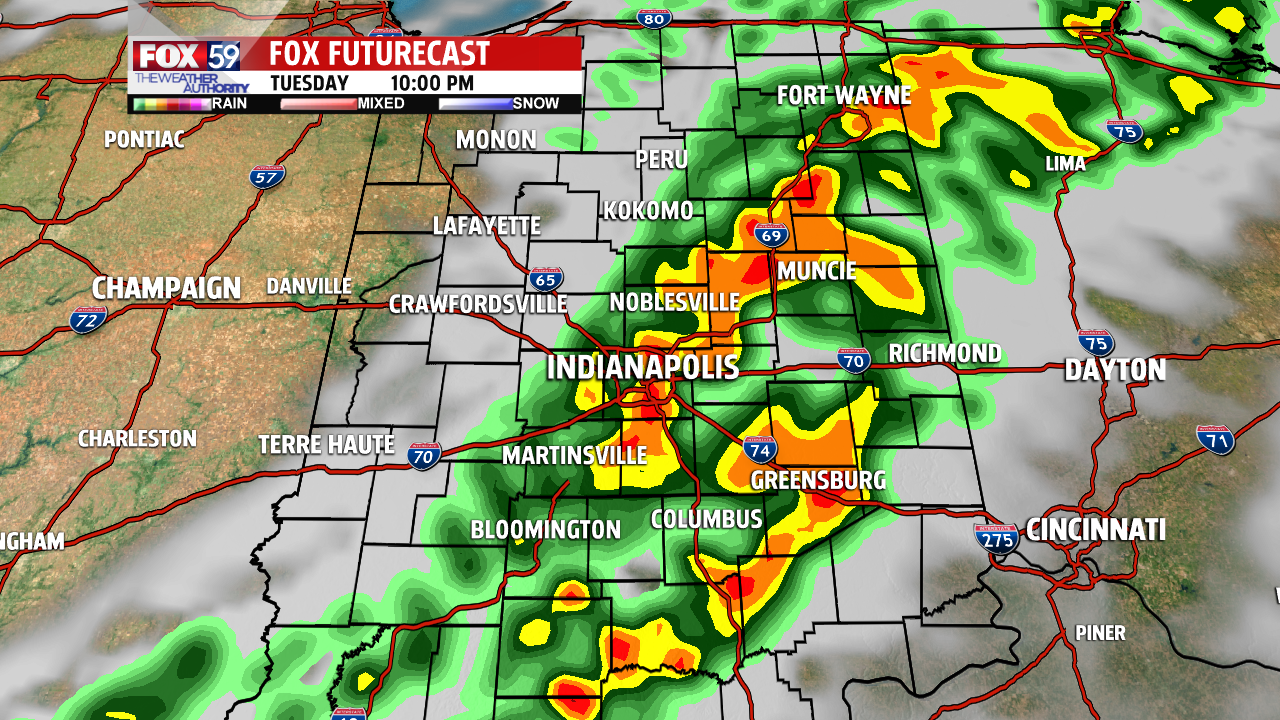 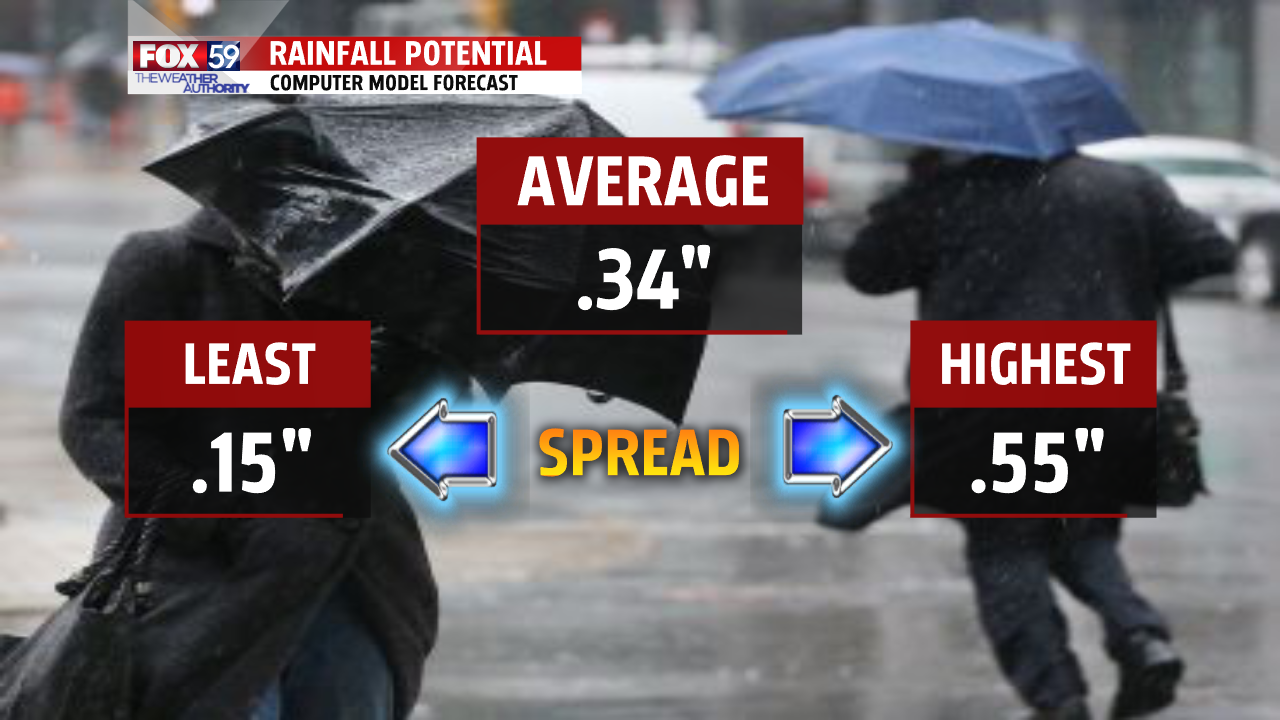 TEMPERATURES TO TAKE A TURN

The chilly will be brisk again being the late night cold front.  We will go from a feel of September to November overnight into Wednesday.  Rain will have ended early but stiff, northwest winds will blow and usher in much cooler air.  Patchy front could return again early Thursday morning. 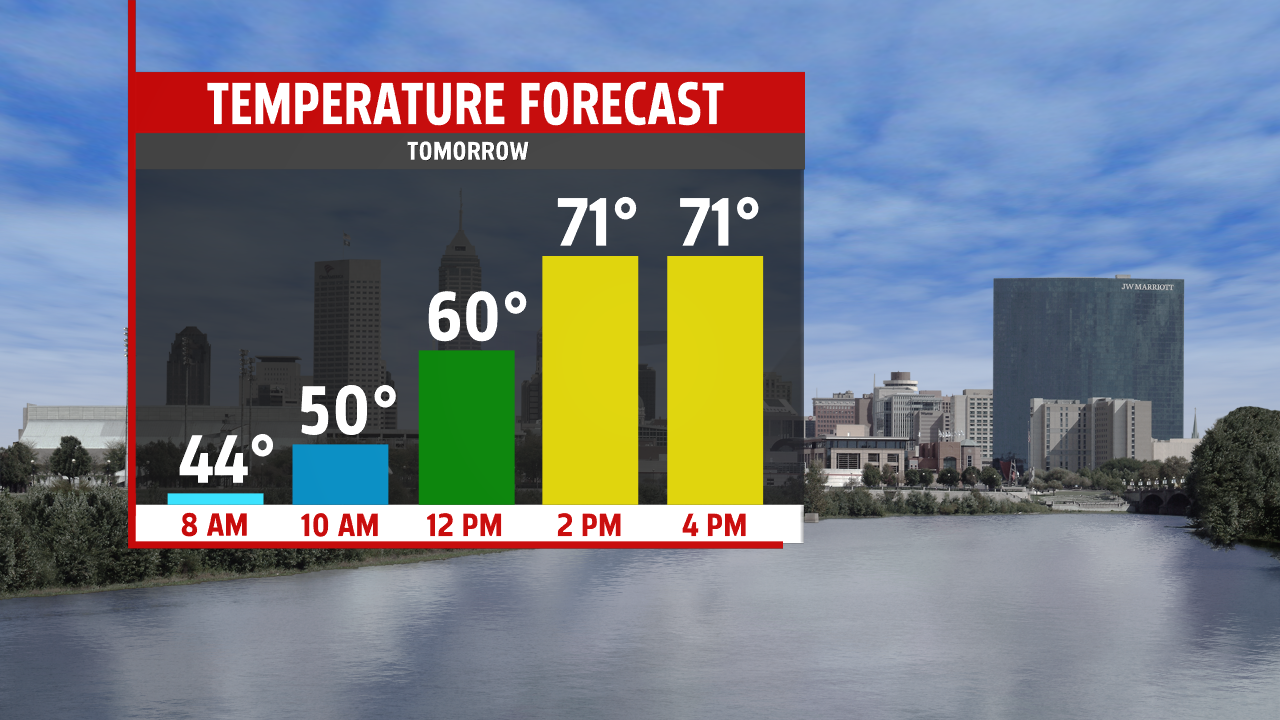 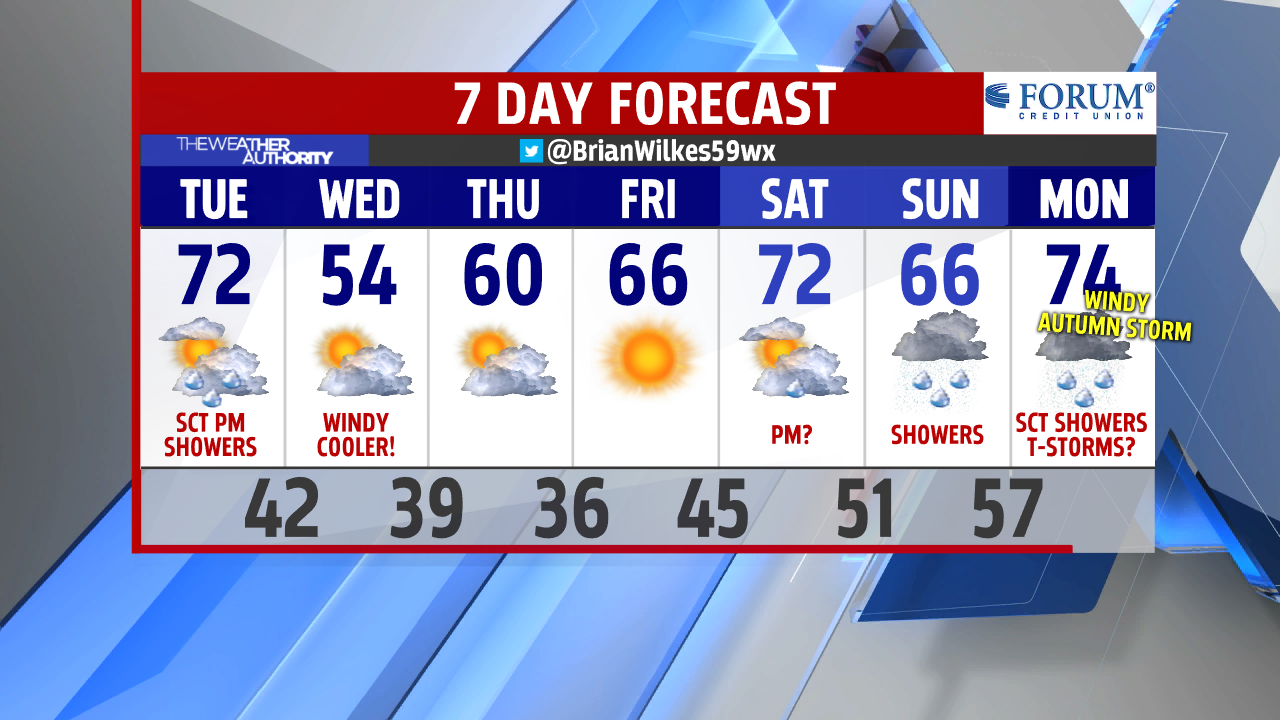 Great day ahead; wet weather returns for the weekend

Additional sunshine will be around today after a frosty start! Winds remain light through the afternoon, as the dry stretch rolls on.

Afternoon highs should reach near 50° -- another day above average to end the work week! Enjoy!

Our dreary February is perking up as we have had the sunniest stretch of the month. Five of the past seven days have offered more sun than clouds. The month still has produced only half the normal sunshine, and only one month in the past 12 had a surplus in sunshine -- last November.

You can feel it! The February sun is getting stronger! We are on our way to spring in 23 days, while it may be a few more weeks out, the sun strength is two times stronger in late February than it was on December 21. Stronger sun is hanging on longer too. By the time the weekend ends, we will have gained one hour and four minutes of daylight since February 1.

A cooler, more seasonal day is ahead, while sunshine continues at times and winds remain light.

Overall, a quiet, average day for anything outdoors, as snow continues to melt away! Winds will remain relatively light from the northwest at 4-8 MPH..

‘Now is not the time to relax restrictions’: CDC head warns of stalling progress in pandemic