A winter storm watch has been issued for parts of central Indiana. This watch goes into effect on Sunday night at 7 PM and lasts through 7 AM Tuesday morning. Two rounds of winter weather will slide through the area and bring a wintry mix along with accumulating snow. 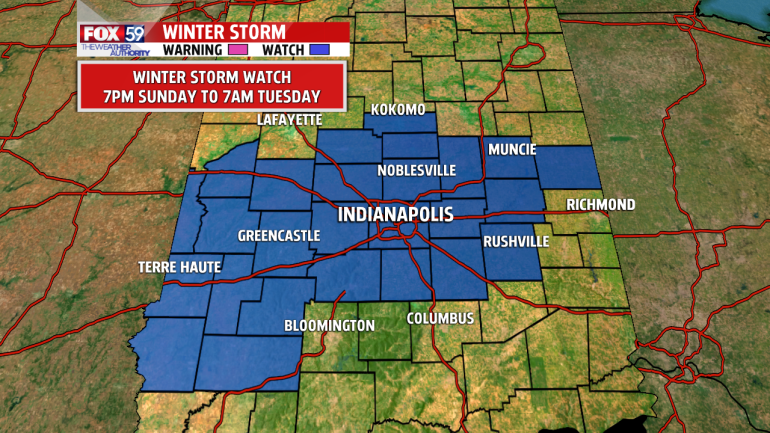 We're lacking in the snowfall department for December. We've only seen a trace of snow since the beginning of the month. By now, we should have seen nearly 2.5" of snowfall. To-date, this is the least snowiest December we have had since 2014. That's all about to change. 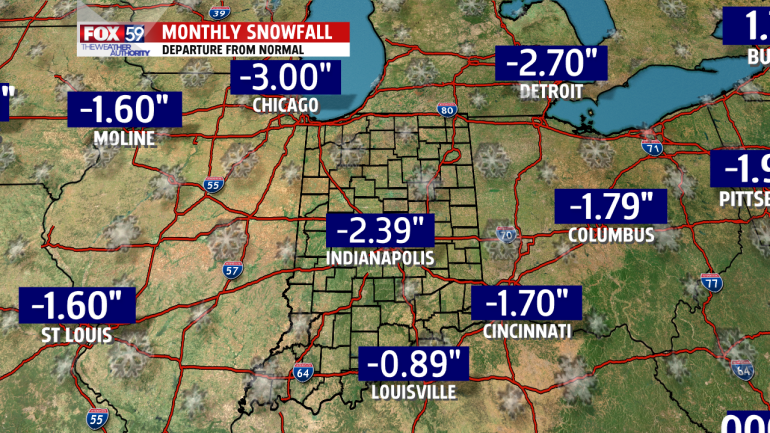 Low pressure riding along the southern branch of the jet stream will bring moisture into central Indiana and set us up for some well overdo snowfall. After a dry, cold start to Sunday, snow chances will rise into the afternoon and evening with peak coverage across our area late Sunday night, after 10 PM. 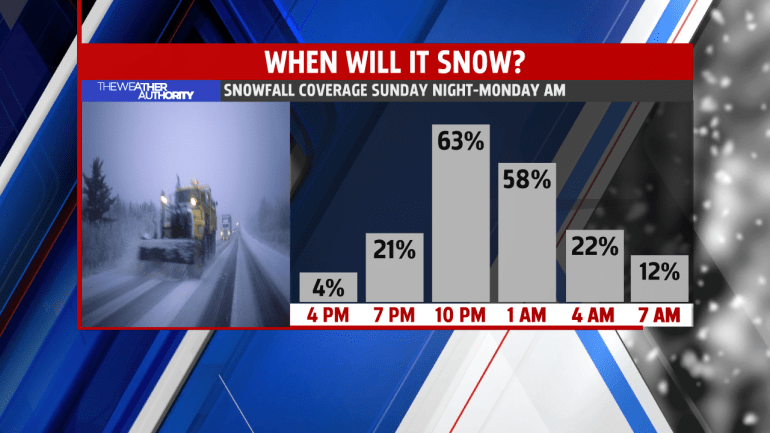 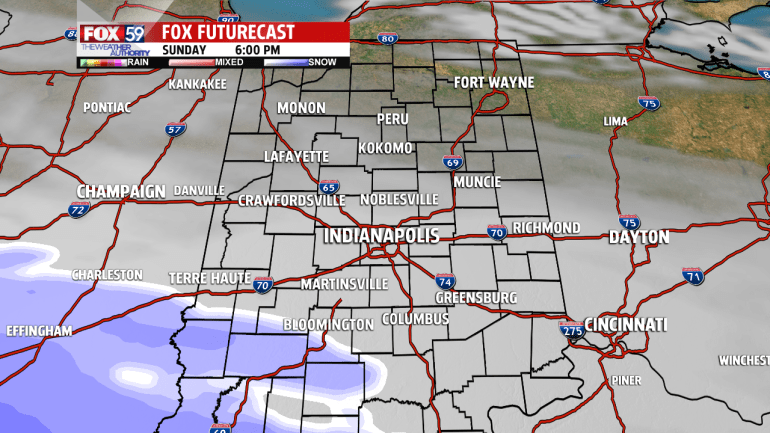 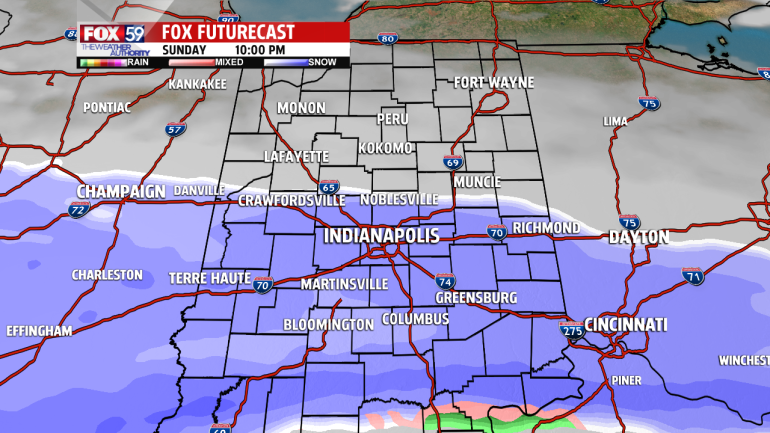 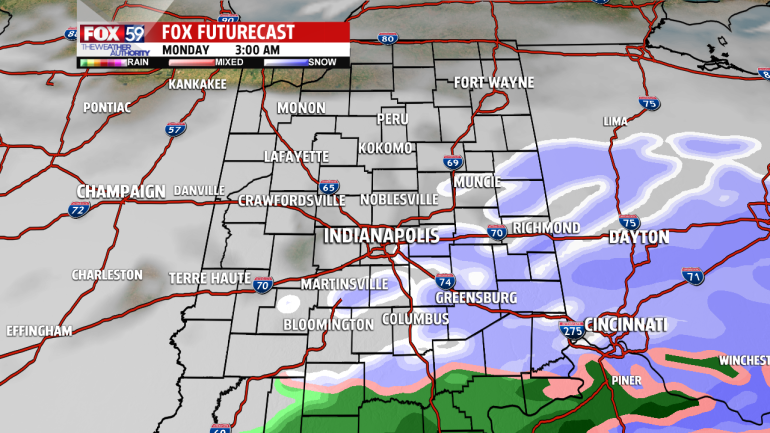 Our first round of snow will drop between 1-3" across central Indiana before easing into the early morning hours on Monday. This could leave slick conditions for the Monday morning commute, especially on untreated roadways. 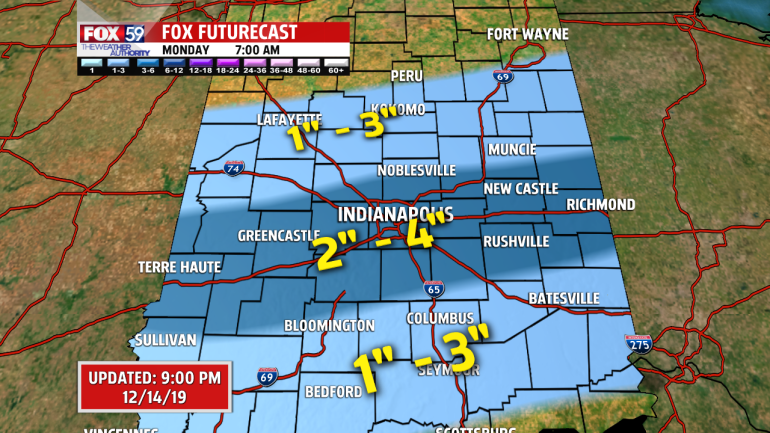 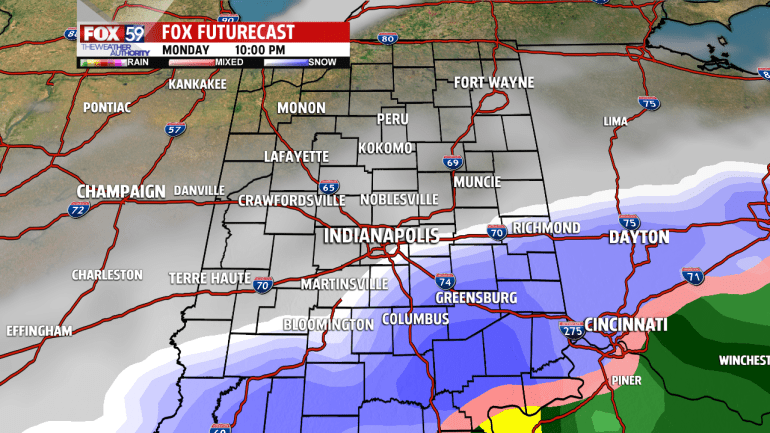 When both rounds of snow are over by Tuesday morning, some areas could see as much as 6" of snowfall, between the two events. However, some melting between Monday morning and Monday night may lower the total amount that is actually left by Tuesday. 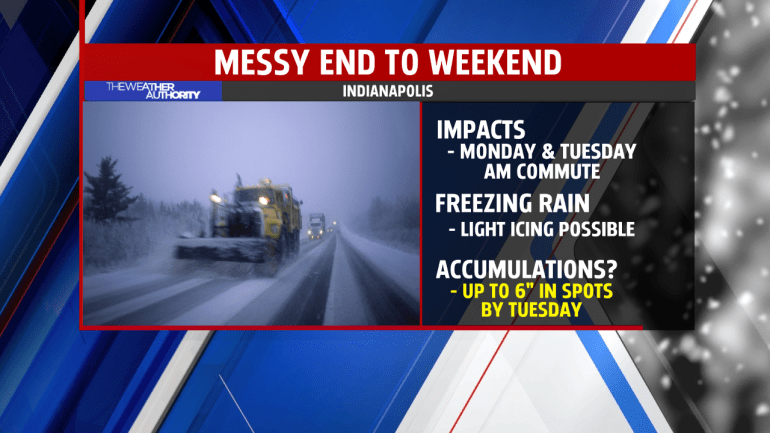 For the rest of your Saturday evening, a few spotty showers and flurries will be possible but most will stay completely dry. This makes it a perfect evening to see the Christmas Nights of Lights out at the Indiana State Fairgrounds. 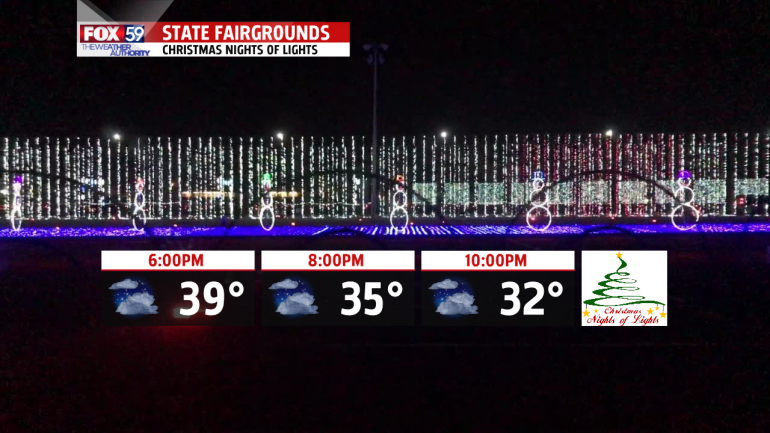 Saturday's high temperatures were able to rise into the mid 40's. A few degrees warmer than average this time of year. Extra chilly temperatures will dominate the forecast for these next several days. Highs on Sunday will peak right around freezing. It's not until late next week that we rise back to more seasonal levels. 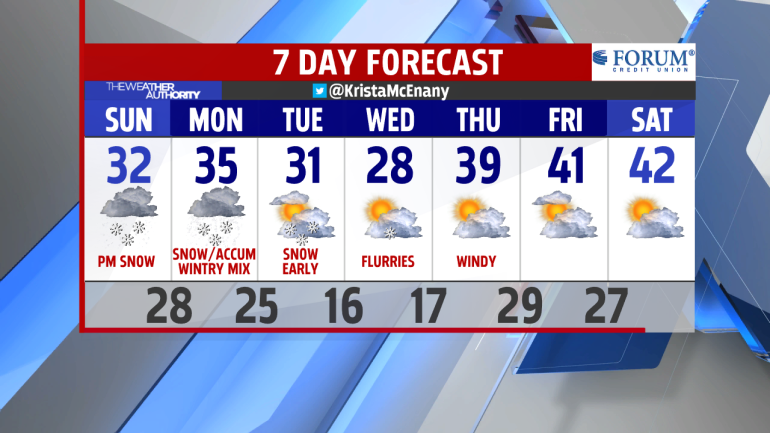 Update (8:30 PM) - Storms are moving into SW Indiana with the potential for severe weather rising over the next few hours. Numerous warnings (severe t-storm and tornado) are being issued along this line, farther south. All severe weather threats remain in play for central IN. Stay alert!

It's been an active open to the weekend. We've already had numerous severe thunderstorm warnings and the threat for additional severe weather, including a tornado threat, remains through the evening. Storm reports as of 7 PM include widespread hail, some up to 1", flooding and damage to trees.

One round of thunderstorms traveled over the northern half of the FOX59 viewing area this morning. Cells quickly pulsed up and produced hail, heavy rain and lightning. Miami, Cass, Carroll and Tippecanoe counties were some of the few that had the thunderstorm activity during the predawn hours Saturday. All storms stayed below the severe weather criteria as they quickly traveled over our northern zone.

All eyes are on the Midwest for the rest of the day. The FOX59 Weather Authority is now closely monitoring the threat for severe weather as we head into the afternoon and evening hours. All threats are at play today, including damaging winds, isolated tornadoes and large hail. Indiana is highlighted under a slight risk with an “elevated risk” for the western half of the state.

Update (7:14 AM) >> Storms are quickly pulsing in our northern counties this morning. Live Guardian Radar showing evidence of hail and heavy rain as they race northeast. Strong storms are possible through 10 AM.

Good morning! The scattered activity that occurred overnight has pushed northeast of the viewing area and moved into parts of northwest Ohio. We are still monitoring the potential for isolated strong to severe thunderstorms early this morning.

Colorado woman trains dog to bring groceries in for neighbor

Stimulus Check Calculator: How much money will you get?

Windy with a mix of sun and clouds Precip: 0%

Colorado woman trains dog to bring groceries in for neighbor