The summer heat is hanging on all the way until the end of the season. A cool down is on the way, however, it doesn’t last long. We made it up to 88° in Indianapolis Saturday afternoon. That’s more than 10-degrees above the average high for this time of year. While the average high temperature falls very quickly over the next couple of months, the heat has seemed relentless for nearly two weeks. We’ll be very warm and humid again on Sunday before relief finally arrives for the first official day of Autumn on Monday. 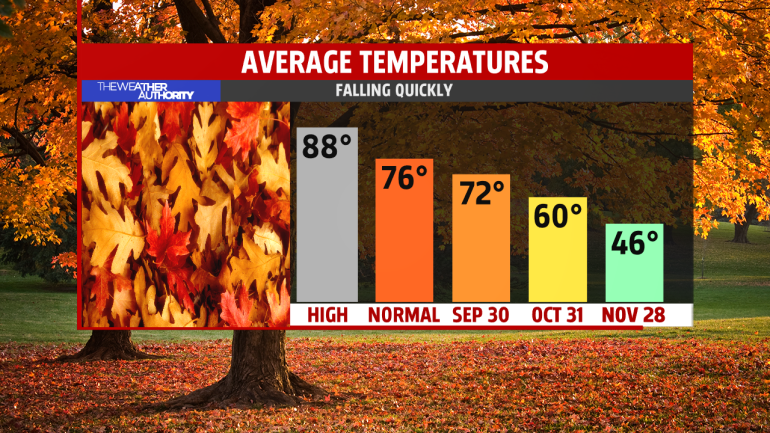 If you have tailgating plans tomorrow ahead of the Colts game, you won’t have to worry about rain. It will be warm, a little humid and very breezy, so make sure you dress comfortably. Hang on to your hats though. Winds gusting near 25 mph at times will be possible. 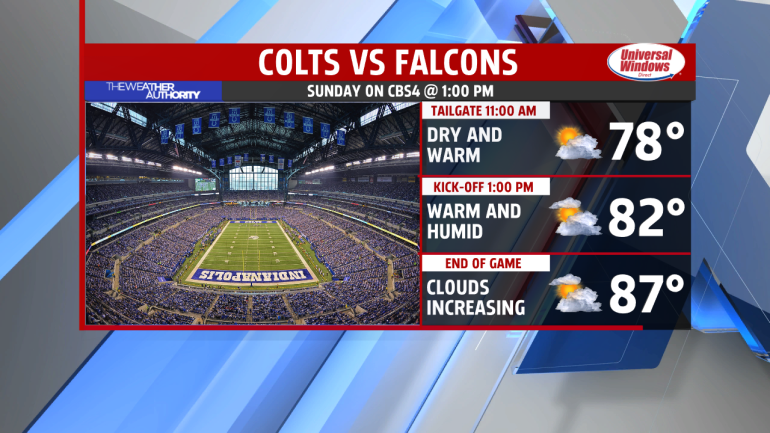 A cold front marching east across the midwest will bring rain and storm chances to the area as we head into Sunday evening. Best chances for rain will be mainly during the late evening hours into early Monday morning. 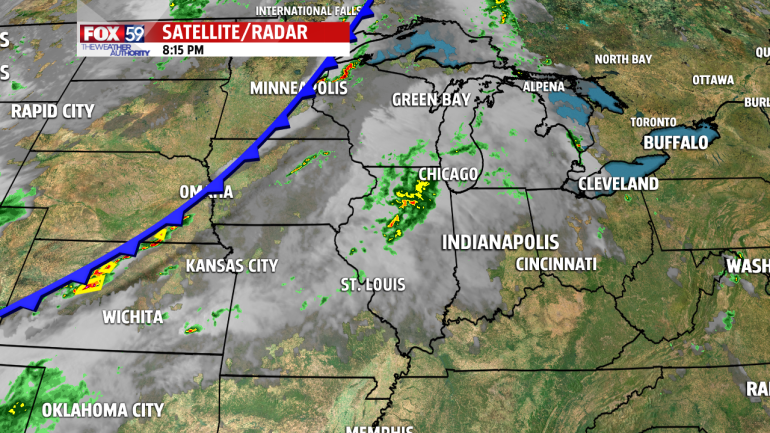 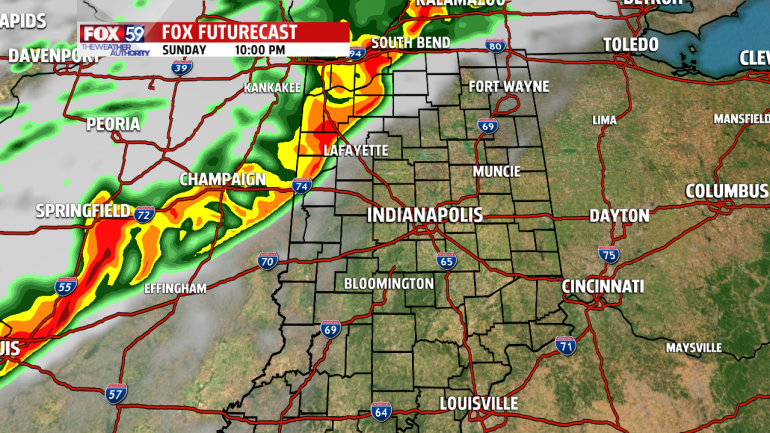 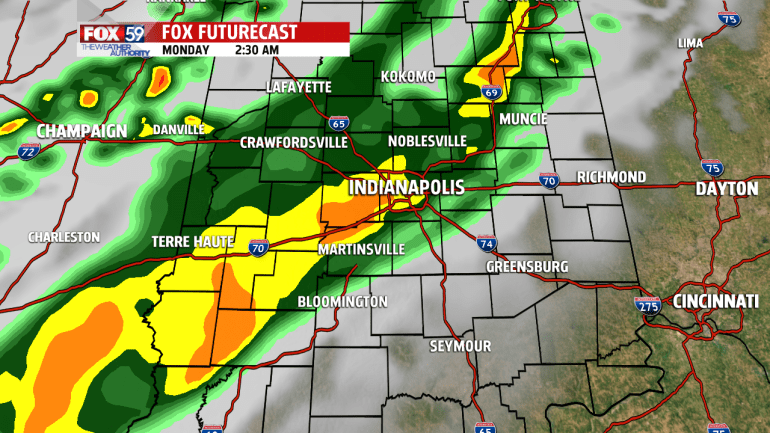 While the axis of heaviest rainfall is looking to setup across central Illinois, we could still some some heavy downpours too. Especially in our western counties. A few strong storms with gusty winds cannot be ruled out, but again, the best setup for severe weather will be to our west, where dynamics will be more favorable. 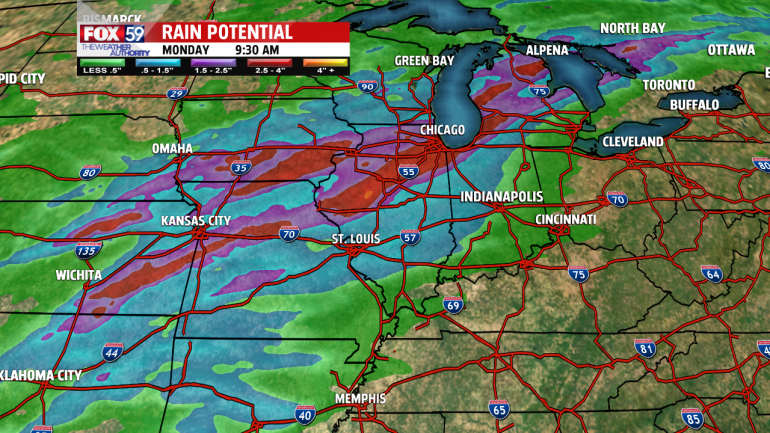 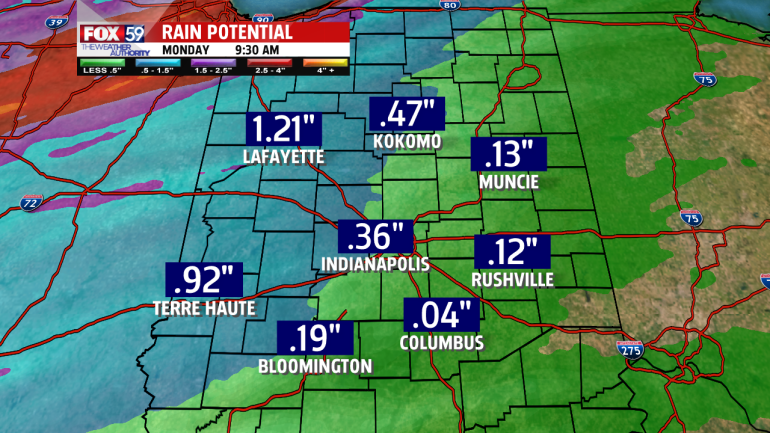 Most of the rain will clear the area by early Monday morning, but you may still need the umbrella as you’re heading out the door for the morning commute. However, you won’t need it for the commute home in the evening. 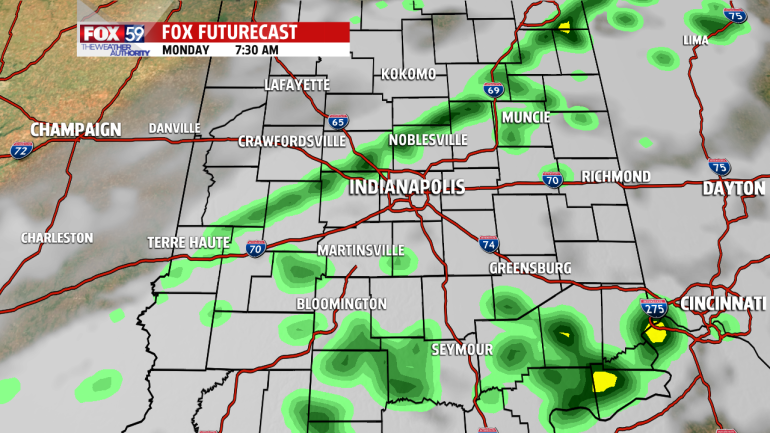 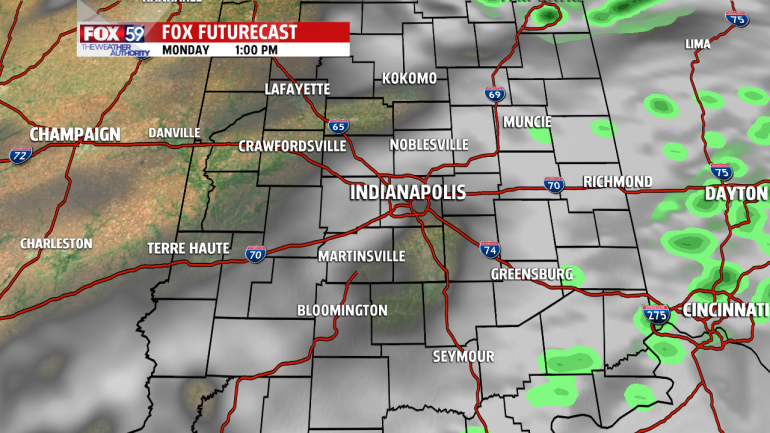 We certainly need the rainfall. September to-date, is the third driest on record, for Indianapolis. We are lacking more than 2″ of rainfall that we should have had by this time. This is the driest September we have had in 56 years! 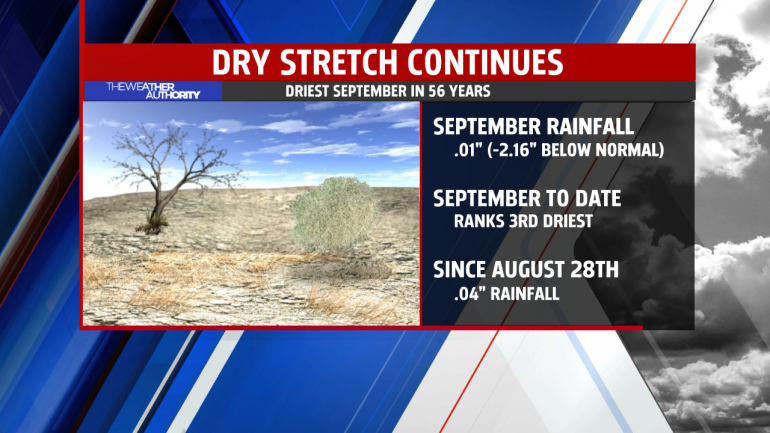 Once the cold front moves completely through by early Monday morning, southwest winds will FINALLY bring us a more Fall-like feel. It arrives just in time! Fall officially begins at 3:50 A.M. Monday. More seasonable temperatures hang around into Tuesday. However, the heat returns as above average temperatures move back in to finish off the month of September. 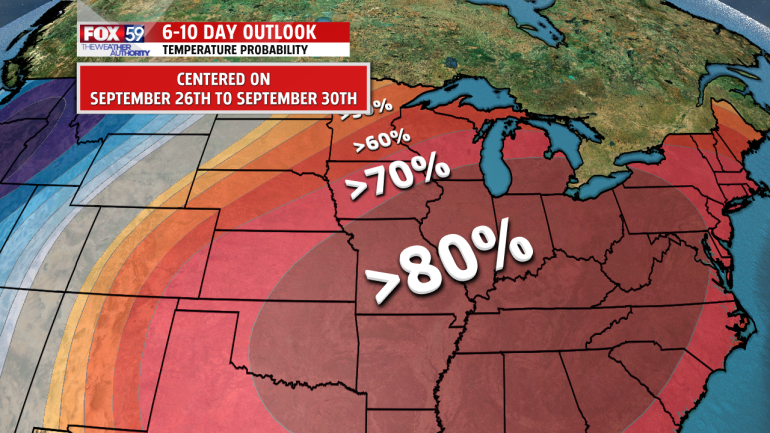 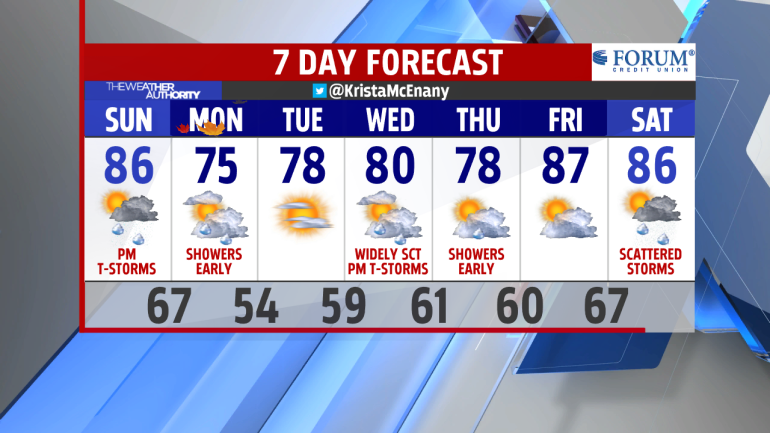 The threat of a complex or cluster of thunderstorms to sweep into central Indiana is on the rise late day. The storms have produced multiple reports of damaging winds and brought widespread power outages in Iowa and Illinois. Winds were measured to 101 mph in Marshall, Iowa Monday.

The storms are moving east-southeast late day and will impact the northwest counties of the FOX59 viewing area before 8 p.m. The storms are racing away from some of their upper-level support but could maintain severe limits with high levels of unstable air across much if Illinois and western Indiana.

Spotty showers and storms around to start your Monday morning! Expect these to advance into Ohio, while drier hours return for the late morning and afternoon, as we heat back up into the upper 80s. Stronger storms will be possible by the early evening, as a new line drops in from the northwest. These storms could be stronger with gusts and heavier downpours. Rainfall is needed, as August is running nearly 1" below average for the month. Be sure to track these storms this evening, as some outdoor activities could be impacted.

A new batch of rain and storms could be around for early Tuesday before more dry time works in for the afternoon. We should expect daily storm chances through Sunday afternoon before a cooler, drier pattern takes hold next Monday. Although daily storm chances will exist...keep in mind, big gaps of dry weather will be with us daily!

The second week of August is opening with a much more summer-like feel. The first seven days of the month all came in below average. At that point Indianapolis was off to the coolest start to August in 28 years. That switched by Sunday when temperatures soared into the upper 80s during the afternoon and humidity rose to very uncomfortable levels. The dew point temperature on Sunday was a good 10° higher than where it was on Saturday afternoon. Dew point temperatures in the 70s, like what we are experiencing today, are more typical of a tropical air mass.

Rain chances are on the rise. We stay dry the rest of the evening but we're tracking a couple rounds of storms for your Monday. A few storms will be possible pre-dawn with a scattered storms in the area after daybreak. Off and on showers will be possible throughout the day but there will be plenty of dry time around as well. More showers and storms arrive Monday night ahead of a cold front that will be approaching the state. This round will likely pack more of a punch with the potential for a few isolated strong to severe storms. Damaging winds will be the primary threat in these stronger storms.

Thunderstorms developing in the afternoon Precip: 60%

While You Were Sleeping: Coronavirus updates for August 10