Skip to content
Live Now
Live Now
President Trump to give address from the White House
Watch Live
Watch Live
FOX59 News at Seven
This is an archived article and the information in the article may be outdated. Please look at the time stamp on the story to see when it was last updated.

Skies are partly cloudy to mostly clear around the state this morning. We will have more sunshine through the first half of the day, but more clouds are going to fill into the state as we head into the afternoon. A cold front is going to pass over central Indiana this evening, which will bring the additional clouds and allow temperatures to gradually fall during dinner time. Before the boundary arrives, temperatures will be seasonal for mid-November with a high near 55° in Indianapolis. 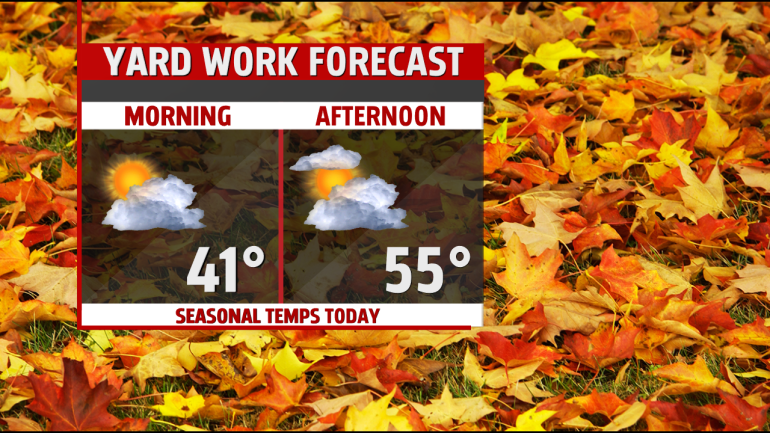 The weather looks dry for the Colts game late in the afternoon! Mild temperatures are expected during tailgate and kick-off. However, temperatures are going to fall back into the upper 40s by the end of the game with skies turning overcast. 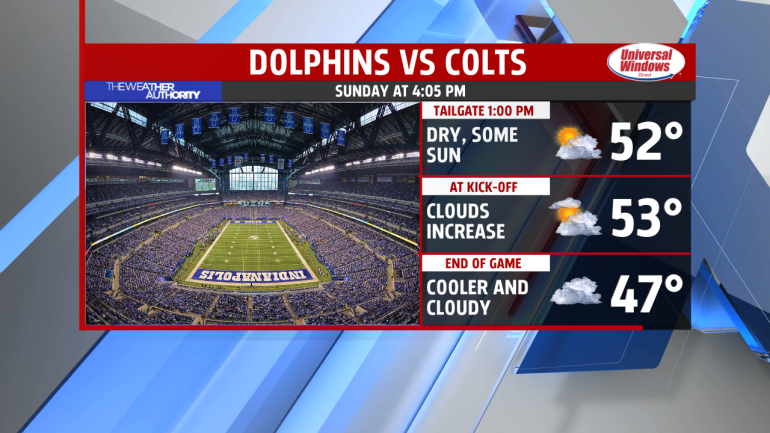 A few rain showers will develop tonight as temperatures take a dive overnight. The rain will mix in with snowflakes during the Monday morning commute and eventually turn over to all snow in the afternoon. Temperatures will drop into the lower 30s by the evening rush hour with strong northerly winds between 15 and 25 mph. Some snow may even stick to the ground, making slick spots possible on roads and sidewalks. 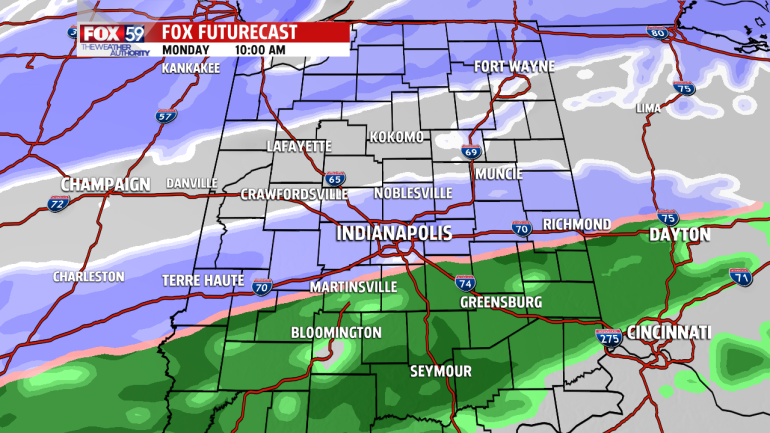 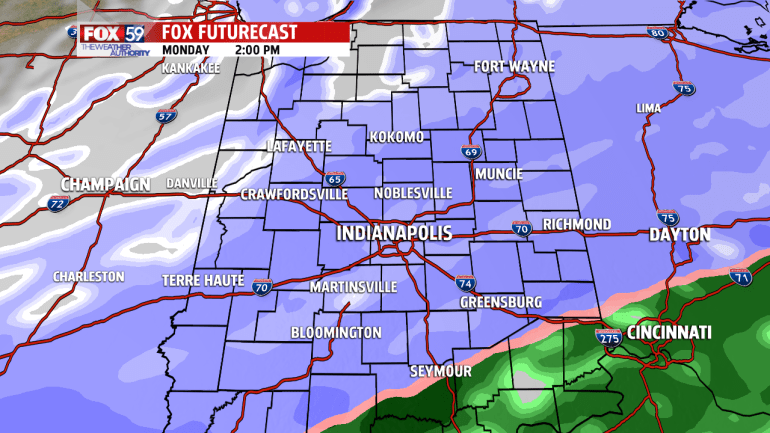 Right now, 1” to 2” of snow may accumulate across central Indiana with highest totals falling north/northeast of Indianapolis. Lake effect snow showers are possible behind the main wave from the system, which is why the northeast zone of the state could see isolated higher amounts. 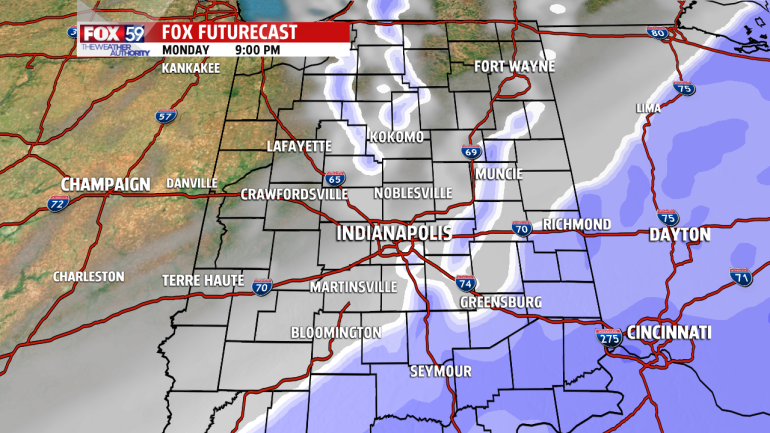 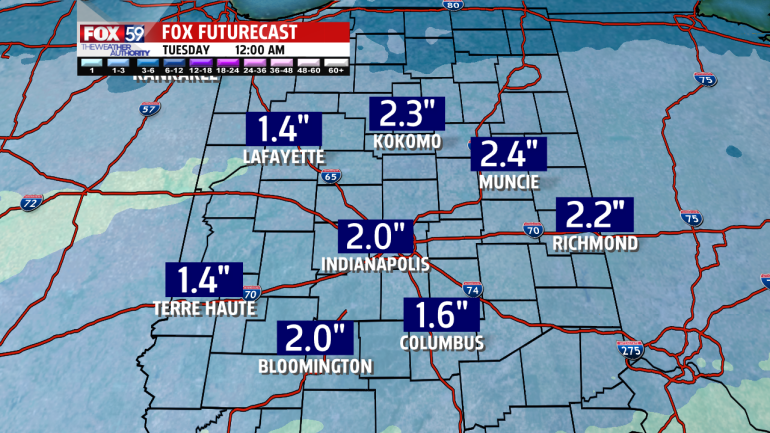 Prepare for January-like weather by Tuesday morning as lows plummet into the lower teens! Slick road conditions are possible Monday night and Tuesday due to the bitter temperatures and recent snowfall. Indianapolis could even break a couple daily temperature records mid-week. The second half of the week is going to be much quieter as highs slowly recover to the 40s by next weekend. 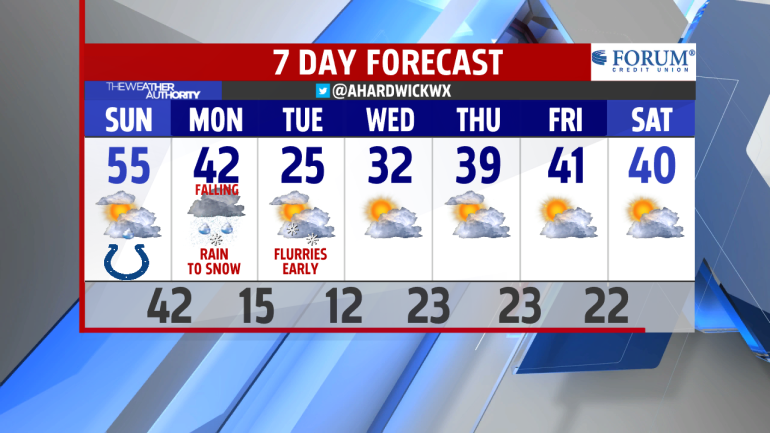 May ends with sunniest day in three weeks; June open is a chill one but heat is on the way

It was a historic May in Indianapolis, weather-wise. Yes no 500 but in the world of weather it will enter the books as producing the all-time coldest temperature in the month of May on record. The temperature dipped to 27-degrees the morning of the 9th.

June opens quietly, heat builds in the days ahead

After an incredible weekend, clear skies and cool air remain intact to begin our Monday morning for the first day of June.

More sunshine is on the way today, but some clouds will increase by the afternoon and evening as a warm front approaches from the west. The warm front could spark a few evening showers (light and mainly north of downtown).

We're wrapping up May and it certainly came with some big swings. Temperatures ranged as high as 88° all the way down to a record setting 27°. Of course, this being a transitional month, big temperature swings are common. We've seen as much as a 71-degree spread between the record warm and record cold temperatures for the month.