Whether you were out in the elements or hearing the roar from inside your home, it was hard to ignore the wind today. Lafayette recorded a peak wind gust of 63 mph while Indianapolis was close at 61 mph. 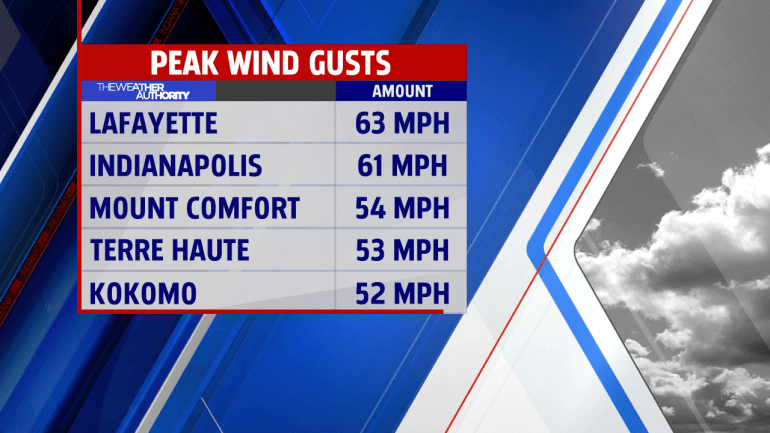 Winds will ease through the evening hours but still remain on the breezy side, gusting near 30 mph through midnight. College football teams will have their work cut out for them this evening. 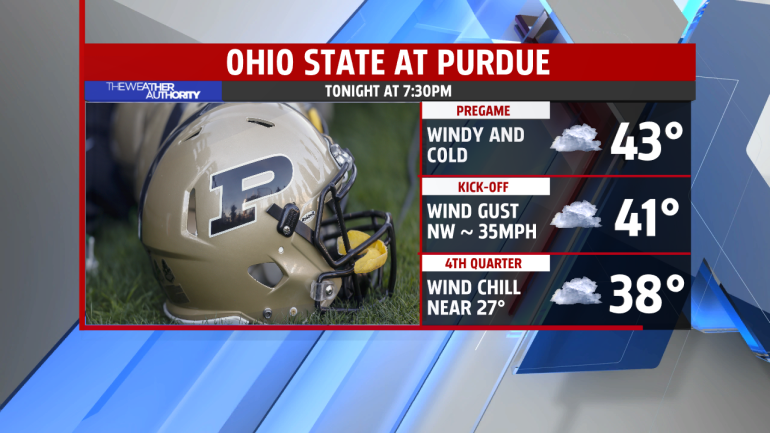 Not only are we dealing windy conditions, but some wintry weather is also threatening a few of us. As spotty showers move through the area, it’s possible a few wet snowflakes or ice pellets could work their way in the mix. Areas with the best chances to see some flakes will be those off to our north and east. 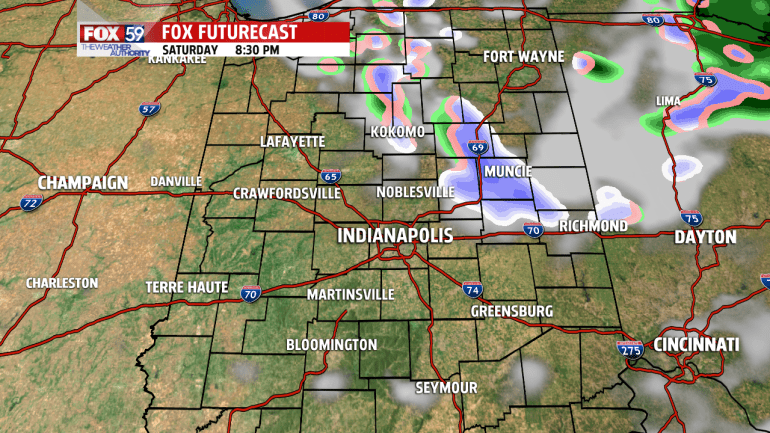 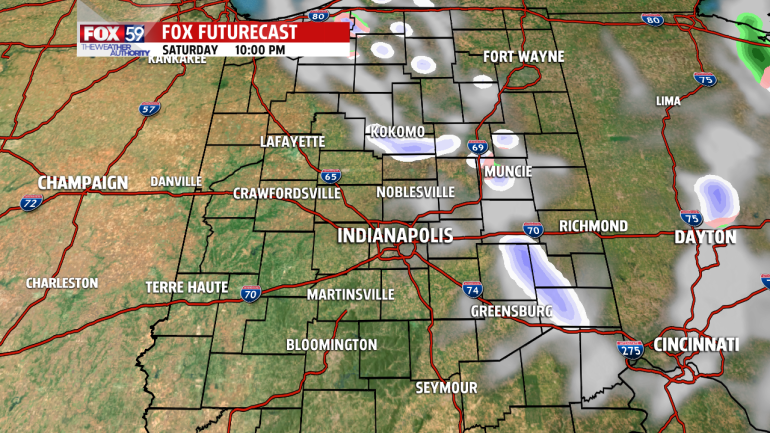 As winds ease overnight and temperatures continue to drop, central Indiana residents will want to plan for frost and freezing conditions by early Sunday morning. Lows will drop into the lower 30’s and upper 20’s. Have the winter coat ready for when you walk out the door tomorrow morning. 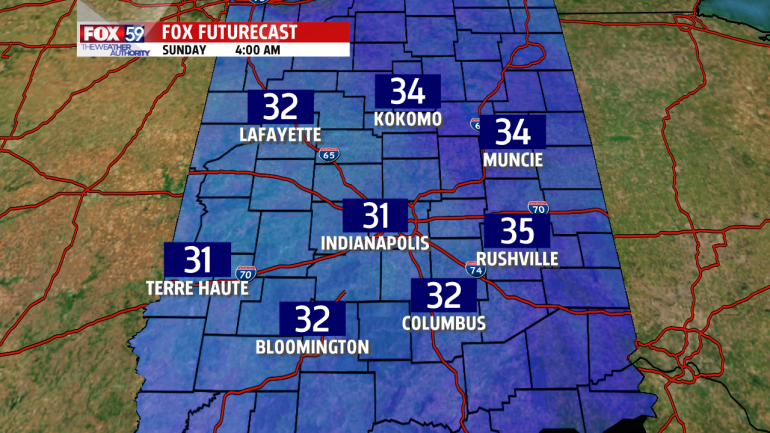 IT COULD BE WORSE

We could be finishing up a mid-October snow storm. 29 years ago today, we wrapped up a 3-day snow storm that started on October 18th, 1989. That’s the earliest date on record for measurable snow for the city. About .2″ fell by midnight on the first day, but we would go on to receive a total of 9.3″ of snow from the 18th to the 20th.

Scanning weather records, October is the month that the first flakes fall. 37 Octobers on record have produced a trace or more of snow – 25 percent. Will we see them this year? As we mentioned earlier, some of us could see them this evening.

Thank you to the Indianapolis Star for the snapshot of the newspaper dated Friday October 20, 1989. Note just days after the huge California earthquake that rocked the World Series that year. 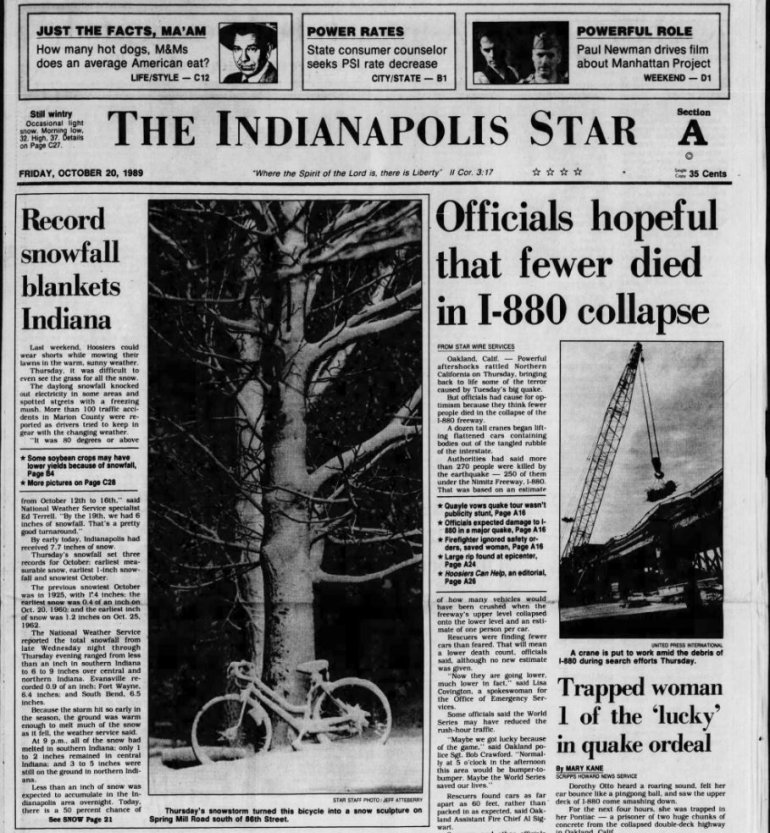 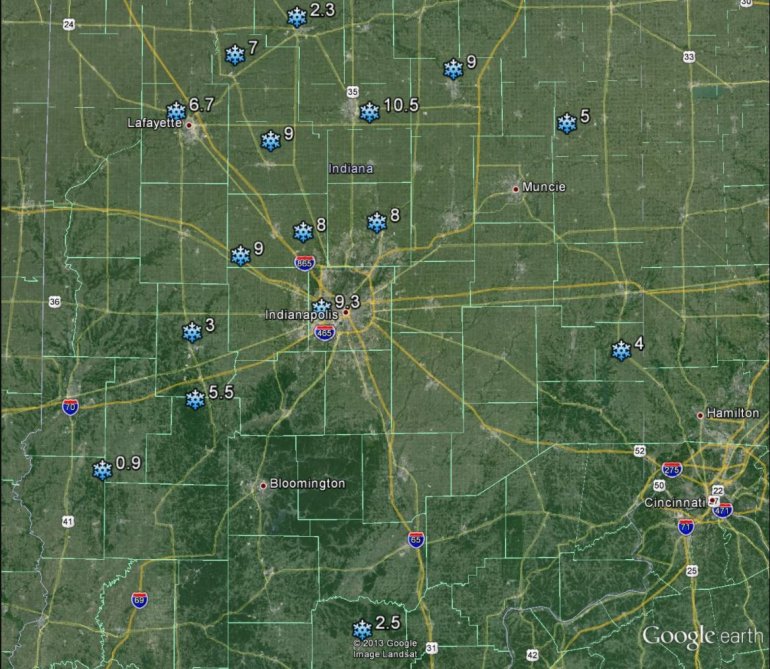 Today marks the beginning of a warming trend that central Indiana will see this week. A wind shift will occur today, and winds will stream out of the south starting this afternoon. The southerly wind flow will help temperatures rise a couple degrees more today compared to Saturday when Indy climbed to 49°. Highs today will likely exceed the 50° mark this afternoon.

The weather turns mild on Monday and Tuesday with highs reaching into the lower to mid-60s! The sunny stretch is going to come to an end midweek as our next storm system nears Indiana. There will still be plenty of sun to enjoy on Monday.  However, more clouds will begin to fill into the state on Tuesday ahead of the system.

Our sunny days are numbered

It's been a gorgeously sunny start to the weekend. Temperatures Saturday afternoon peaked in the mid 40s to lower 50s. Yes, there was a seasonal chill in the air but overall, a fantastic day for early March.

It will be another chilly evening as skies stay mostly clear and temperatures start dropping into the 30s by 9 PM. If you're wanting to stay outside this Saturday evening, gathering around the fire pit may be just the thing to you. We'll stay dry with a seasonal chill in the air. There will only be a very light breeze with winds out of the NW near 4-8 MPH.

What’s behind the sunny streak?

We have opened up March with bright sunny skies, the brightest stretch of weather here in three years. The last time the skies we so sunny was exactly three years ago in March of 2018 when the second, third and the fourth of March were deemed at or about 100% sunny. We added just a few high clouds to the mix Friday but that wasn't enough the dim that sunshine.

March 2021 is a young month but is on breakneck pace when it comes to sunshine production! Barely a week in, it has produced 82% possible sunshine, 50% is normal in March. We deserve it! Each of the past 14 months have been cloudier than average with the exception of last November.