Once again weather across central Indiana was far ranging from a December-like feel west to early October highs east.  Area-wide could cover was thick but a slow moving, nearly stalled front brought a decided change from west to east.  Late day the temperatures ranged from 43° in Crawfordsville to nearly 60° in Shlebyville. 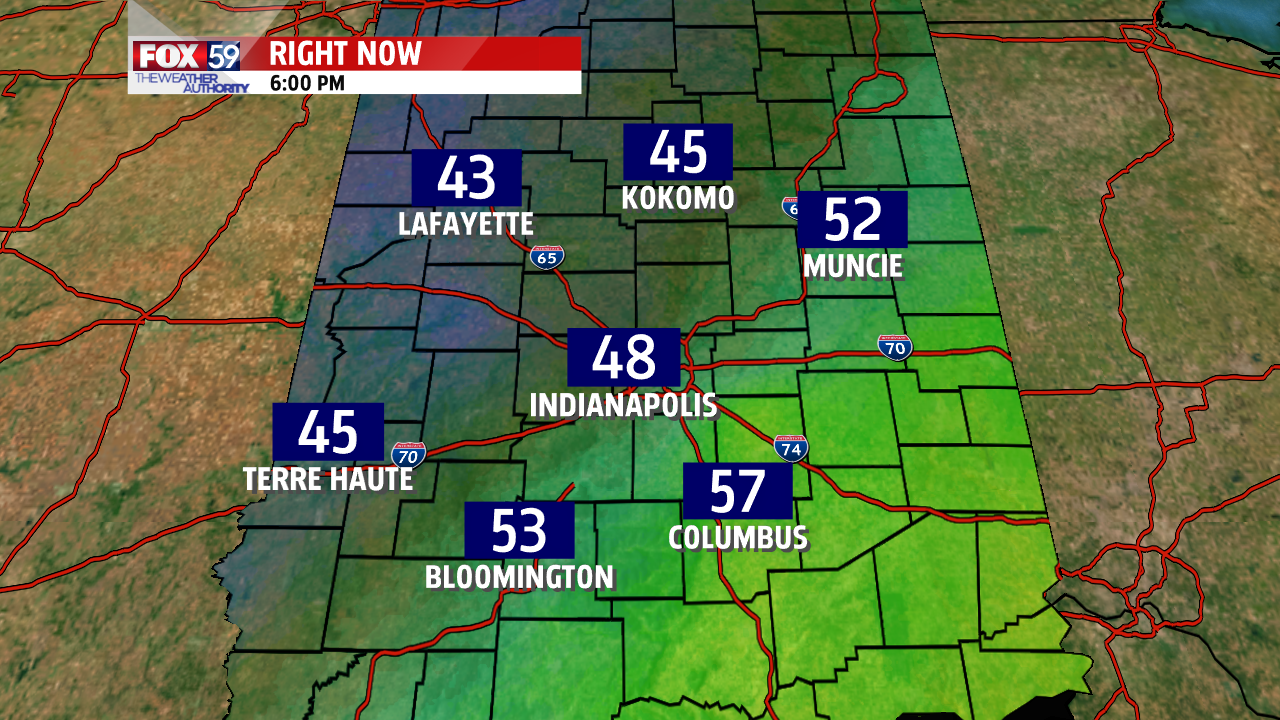 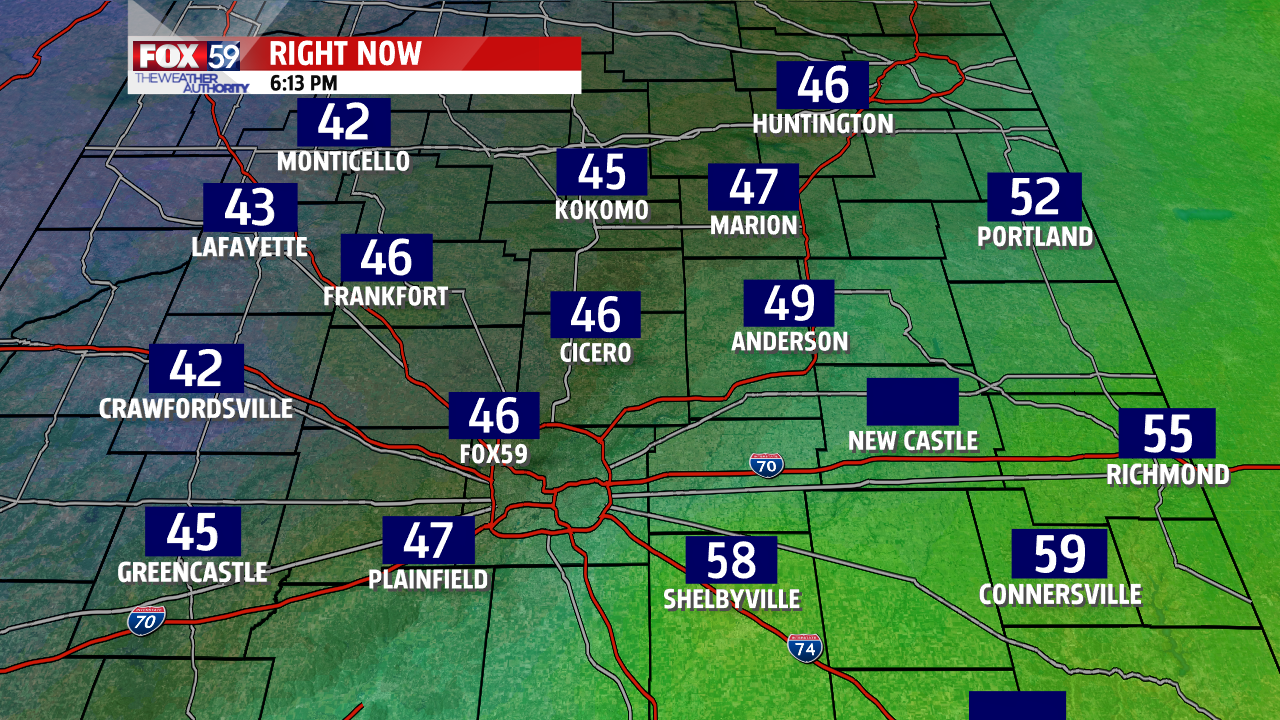 Rain will spread northeast later tonight along and north of the front arriving after midnight and lingering into sunrise Wednesday.  Damp and foggy conditions along with chilly temperatures are expected out the door tomorrow morning.  Rainfall will be heavier north and west before tapering quickly to spotty light rain.  Amounts could approach 1″. 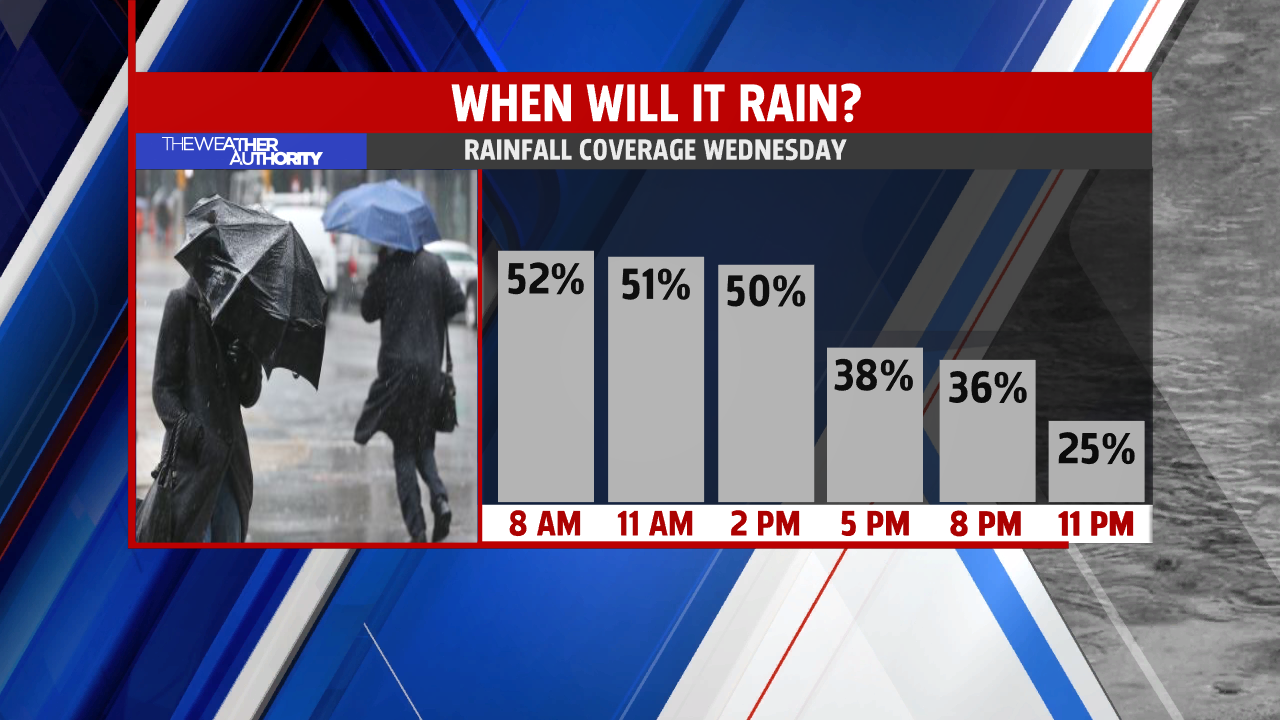 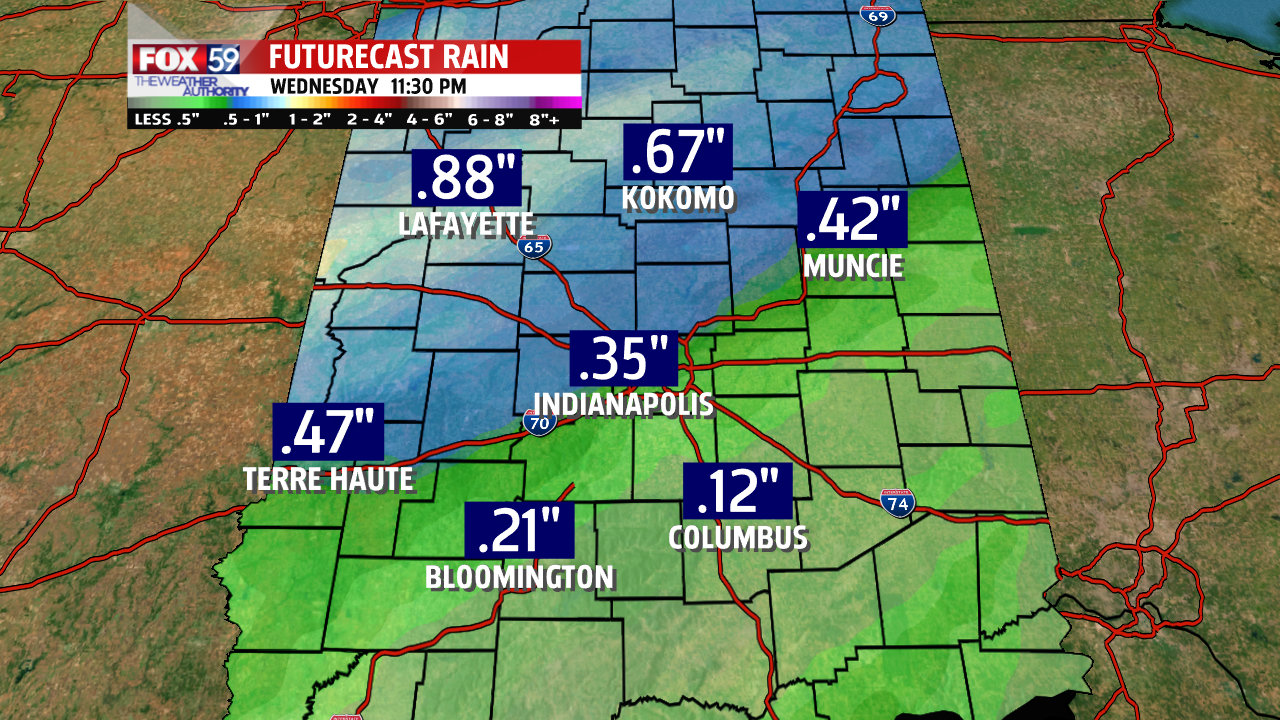 Winter isn’t far away,  look at the cold out west in the image below.  The chill reaches well into Texas. Winter weather advisories have been issued for 1″ to 3″ of snow in nearby Illinois through Wednesday morning. 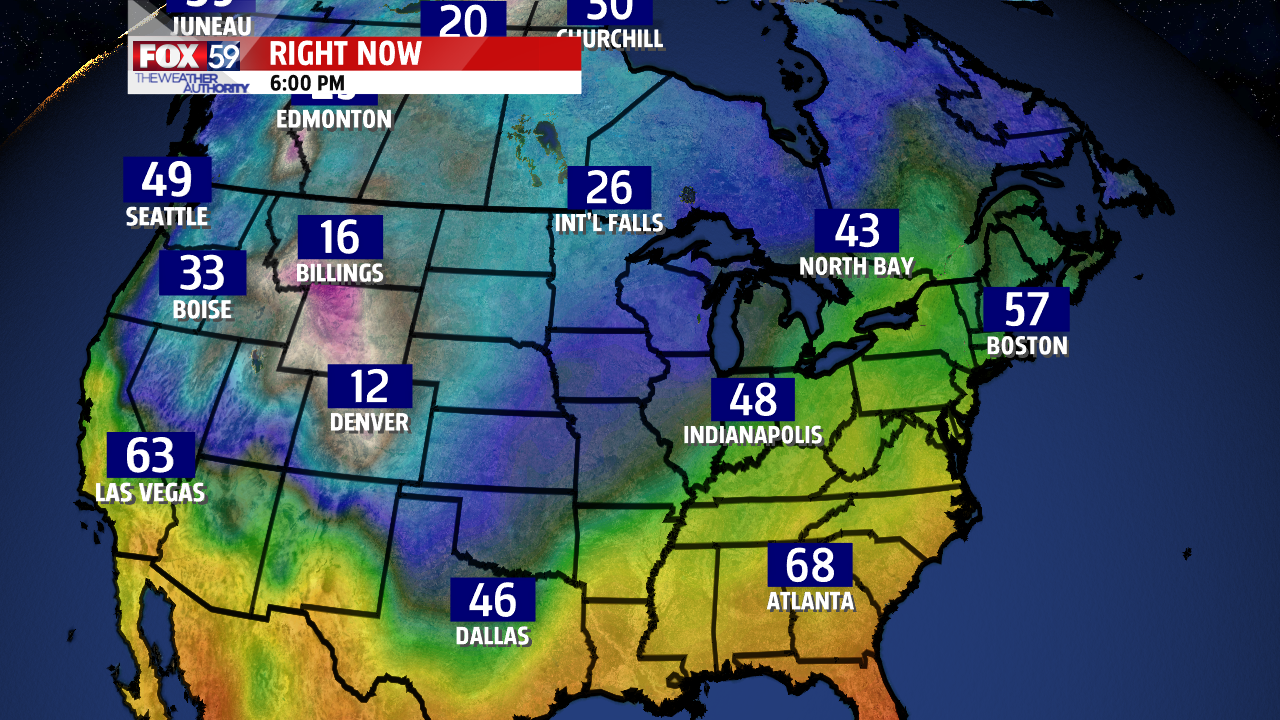 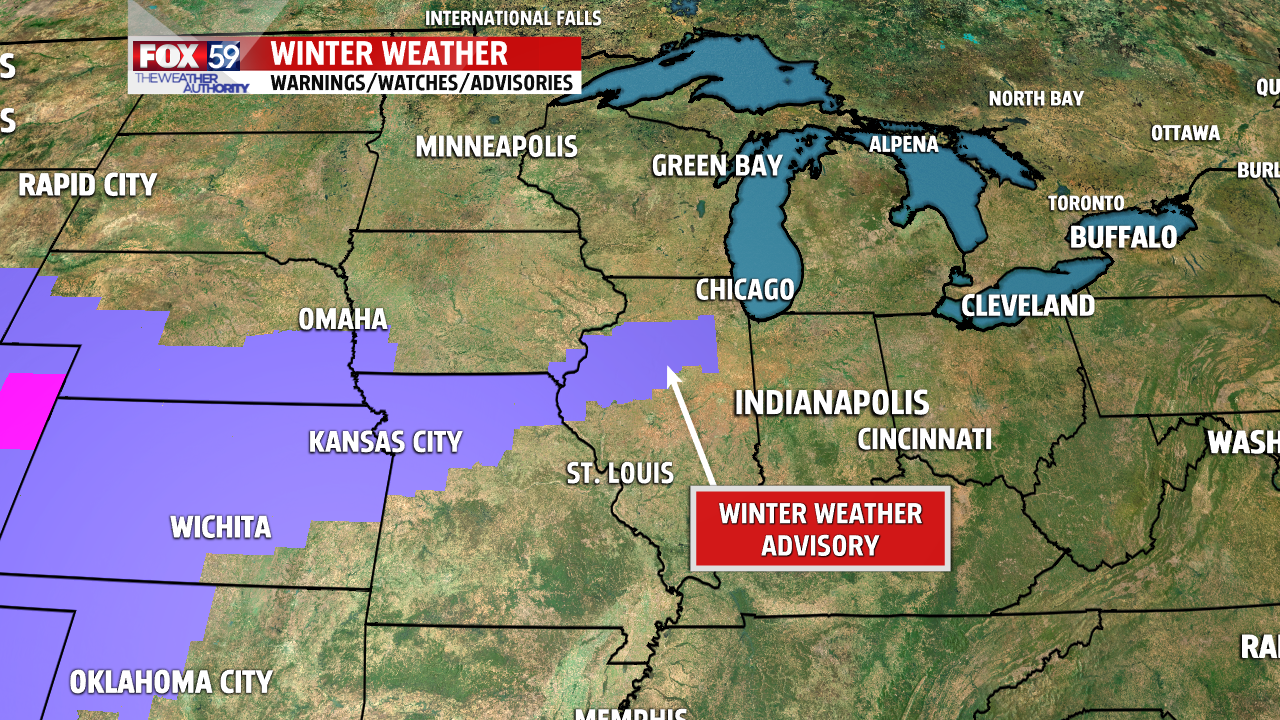 It is going to get cold fast!  A new surge of rain will be inbound before sunrise Thursday on a southwest wind that keeps temperatures fairly mild to start the day.  It will not last long.  A low pressure will pull east early on allowing for the colder air to surge into the state.  Temperatures are expected to fall sharply through the 40s and into the 30s Thursday.  Brace for the chill – the wind chill will fall well into the 20s before sunset bottoming out in the teens by early Friday morning.

Rain will likely be at its peak coverage early Thursday then taper off the patchy light rain and a few showers during the afternoon and early evening.  While an umbrella may not be required Thursday evening for the little ghosts and goblins, a heavier coat will be needed.

As the low pressure deepens (the barometer will drop sharply), a large wind field will develop.  Winds are expected to become quite strong and begin gusting over 45 mph from the northwest late Thursday night into Friday morning. 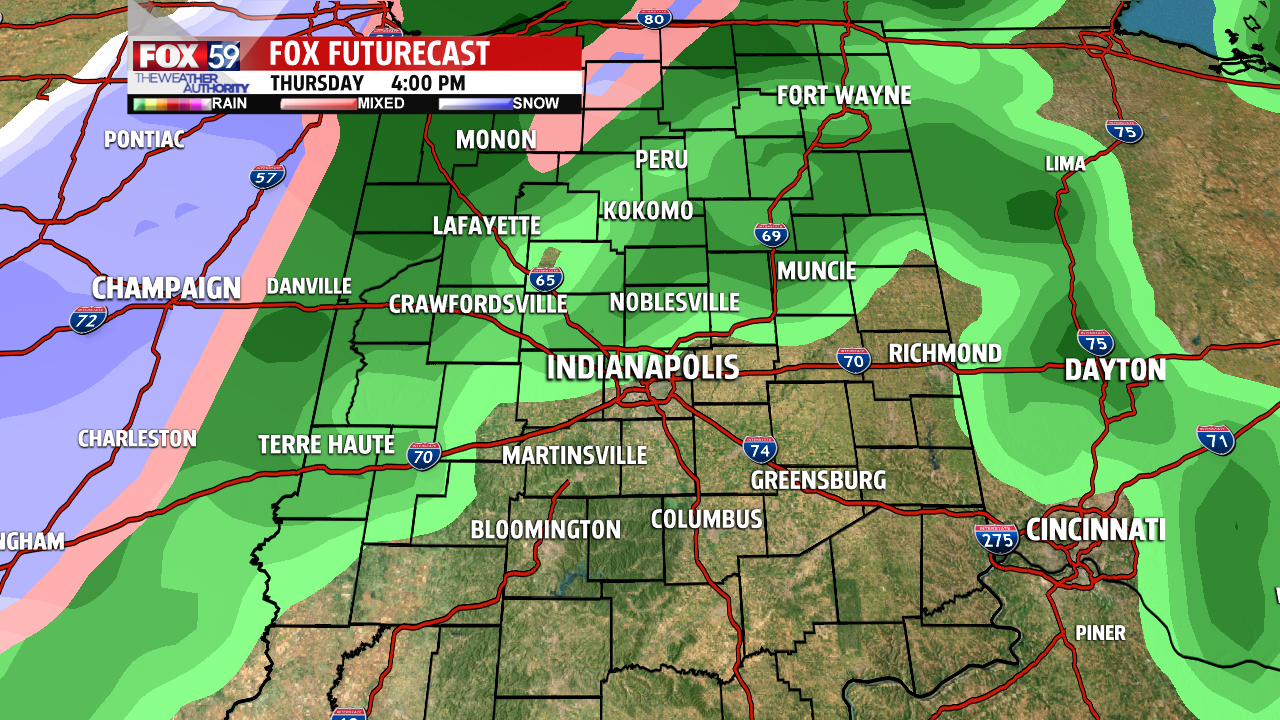 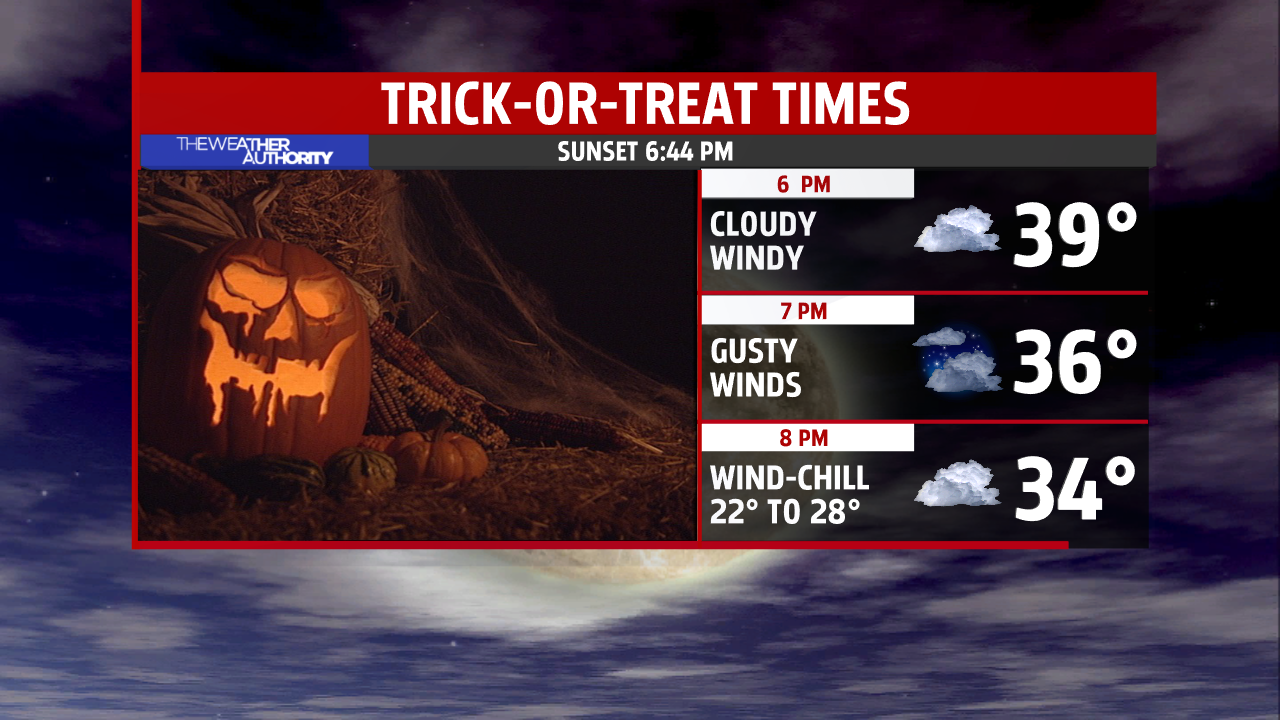 Colder air will be driven into the state and expect the wind-chill to dip well into the lower 20s by evening for the trick-or-treaters. 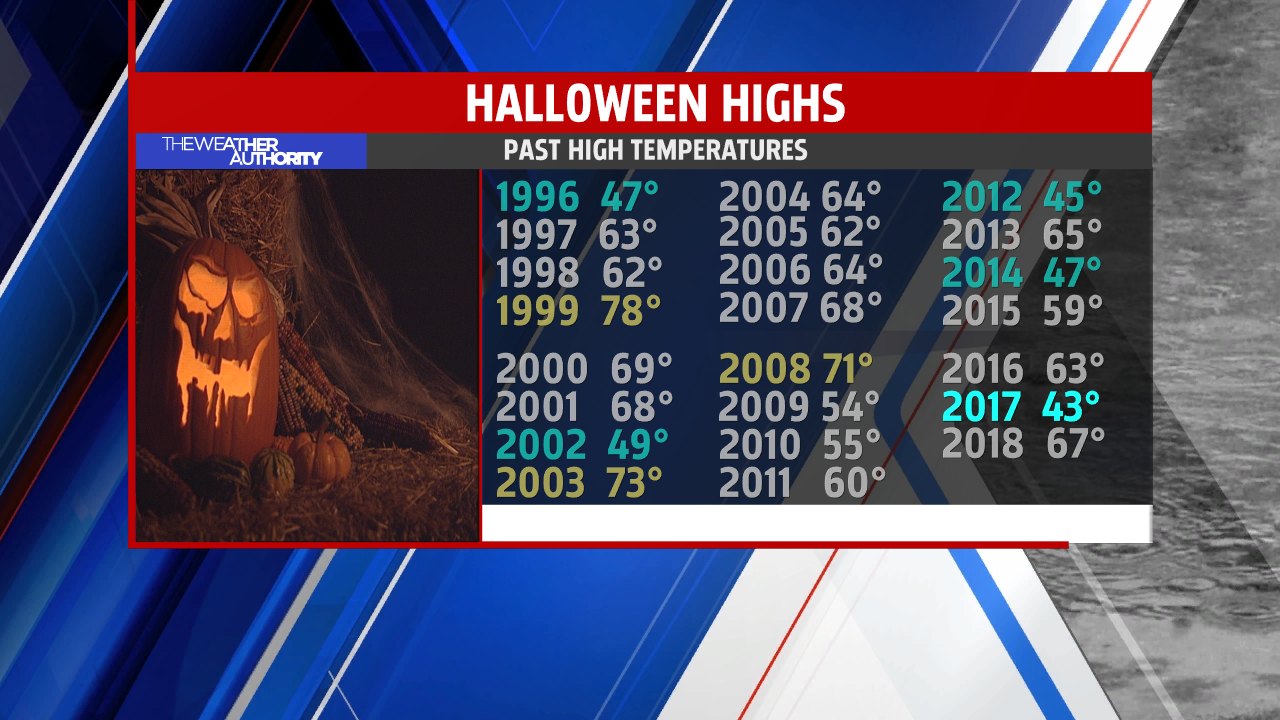 After two rounds of storms on Monday and countless reports of wind damage/power outages last night, the pattern is settling down now. This morning will be dry and muggy with temperatures hovering in the lower 70s and solid visibility. Hazy sunshine through the day and a light northwest wind should bring our highs back to the middle 80s. A slim shower/storm chance will be possible but well south of Indianapolis by late afternoon. Most will stay dry.

A change in the pattern, really a shift south, is now taking what looked like an active week of storm chances to hardly nothing! As the front drops south and stalls across Kentucky, storm prospects become minimal and mostly for the southern 1/3 of the state through the remainder of the workweek.

The severe thunderstorm watch has been lifted early across Central Indiana as storms have settled well south Monday evening. The storms left their mark with numerous reports of toppled trees and downed power-lines. Late Monday, the state of Indiana reported over 150,000 outages with Carroll county experiencing nearly 60% outage county wide. Just after 10 pm IPL reported just under 10,000 without power.

The threat of a complex or cluster of thunderstorms to sweep into central Indiana is on the rise late day. The storms have produced multiple reports of damaging winds and brought widespread power outages in Iowa and Illinois. Winds were measured to 101 mph in Marshall, Iowa Monday.

The storms are moving east-southeast late day and will impact the northwest counties of the FOX59 viewing area before 8 p.m. The storms are racing away from some of their upper-level support but could maintain severe limits with high levels of unstable air across much if Illinois and western Indiana.