The National Weather Service has confirmed that a 10th tornado briefly touched down in Brown County Saturday. It was an EF-0 tornado that caused little damage and was observed south of State Road 135.

The National Weather Service continues to assess the damage from the powerful thunderstorms Saturday night. Late Monday, the official report for Rush County was still in the works, but completed in several other counties, including Marion County. Damage in and around Beech Grove was consistent with an EF-1 tornado that had 100 mph winds shortly before 7:30 p.m.

After early morning rainfall and a spell of rain-free hours, the rich, tropical air along with a stalled front were likely to result in new storm development later in the day. An added feature was a small spin or low pressure left over from the early morning complex of showers and thunderstorms that would be the mechanism behind producing several tornadoes Saturday evening.

With a tornado watch already in place, the first Tornado Warning was issued from the National Weather Service out of Indianapolis before 6 p.m. for Greene County. That storm would track northeast and eventually produce a tornado in Owen County. That tornado started near 6:30 p.m. in Freedom and would track northeast for just over eight miles. Winds with the storm reached 110 mph, making this an EF-2 rated storm. 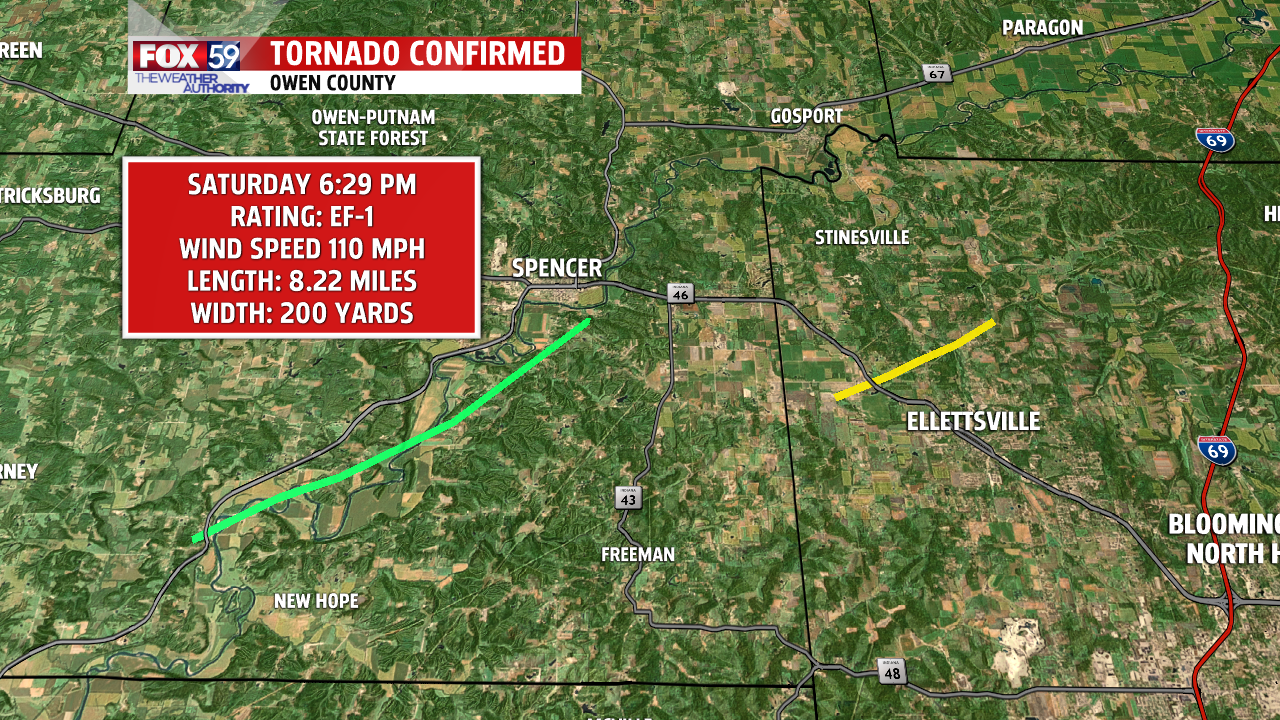 The storm would enter Monroe County with several radar signatures that a tornado was occurring, and then would dip down northeast of Ellettsville at 6:48 p.m. With a path length of just under four miles, the wind damage was consistent with an EF-2 rated tornado with winds of 130 mph. 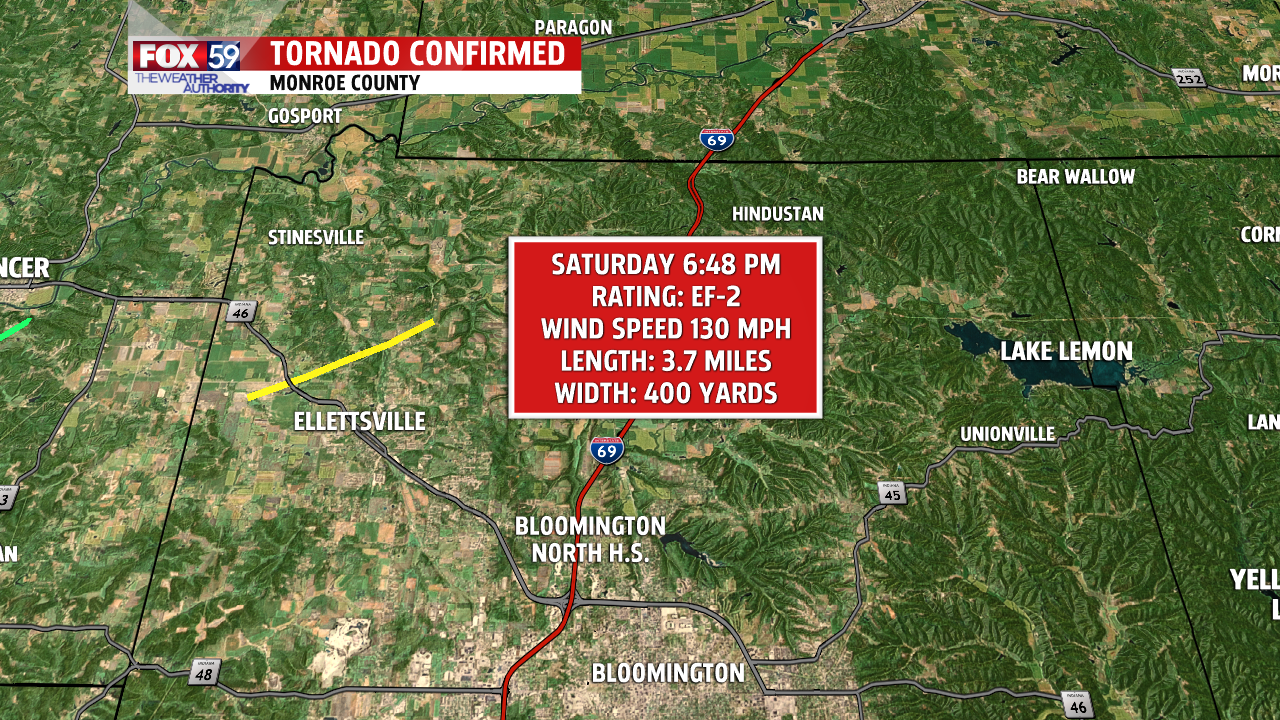 New storms would develop southwest and race east across Greene County, producing a new tornado just before 7 p.m. The EF-2 tornado would track 3.5 miles with winds estimated again at 130 mph. 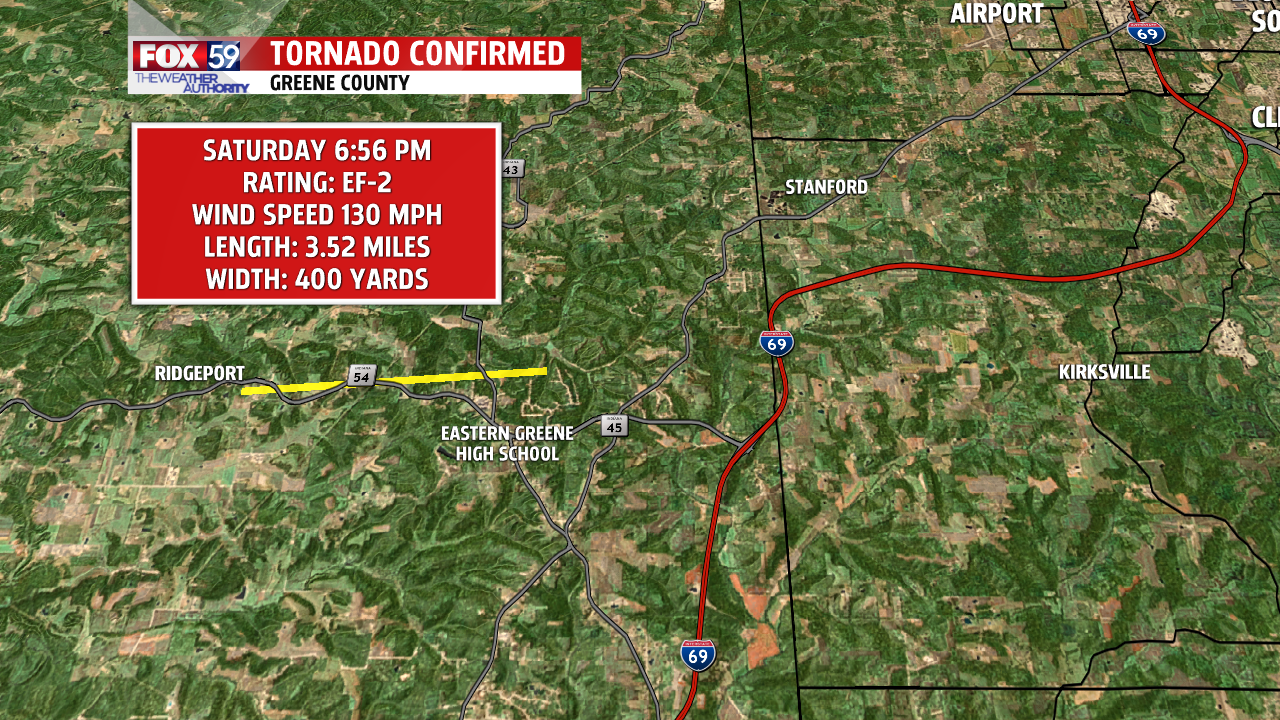 Meanwhile, a Severe Thunderstorm Warning was issued for a portion of Marion County, and a Tornado Warning would follow just after 7:30 p.m. The first tornado in Marion County since August 2016 would track near Beech Grove with a path length of nearly two miles. Winds were determined to reach 100 mph.  A new and brief tornado would occur a few minutes later, with a track of less than one mile and winds of 70 mph. 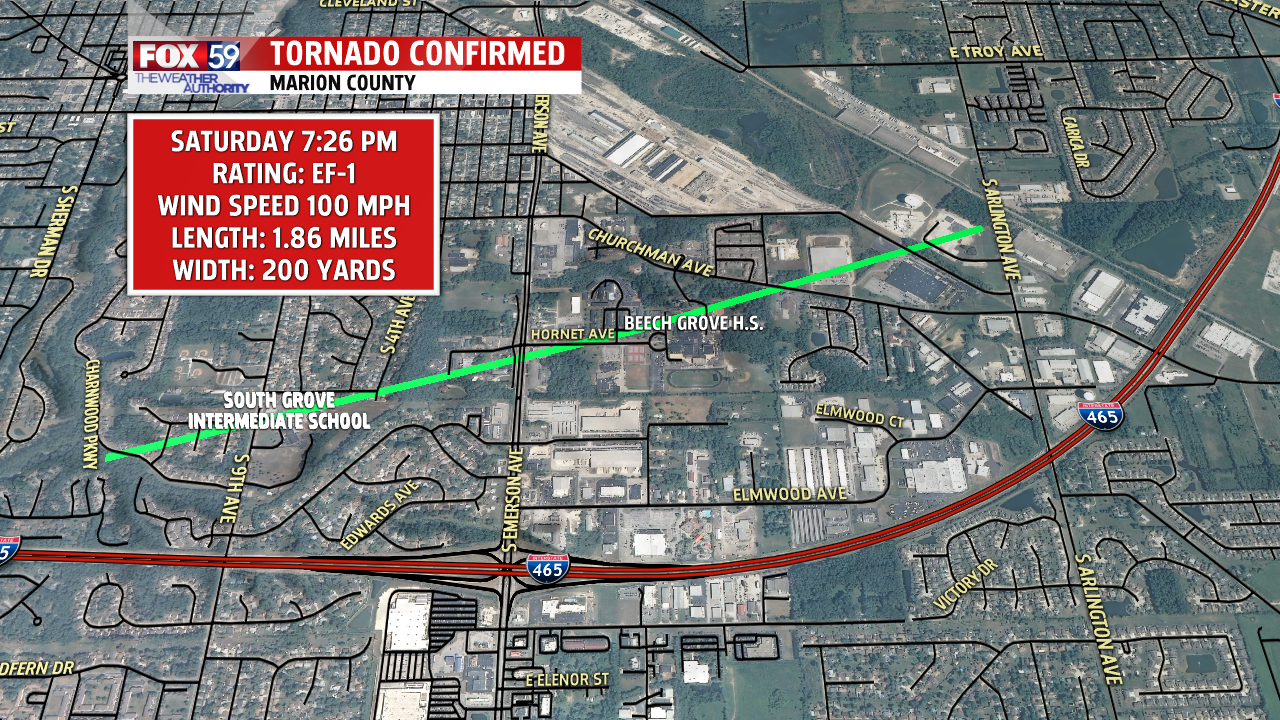 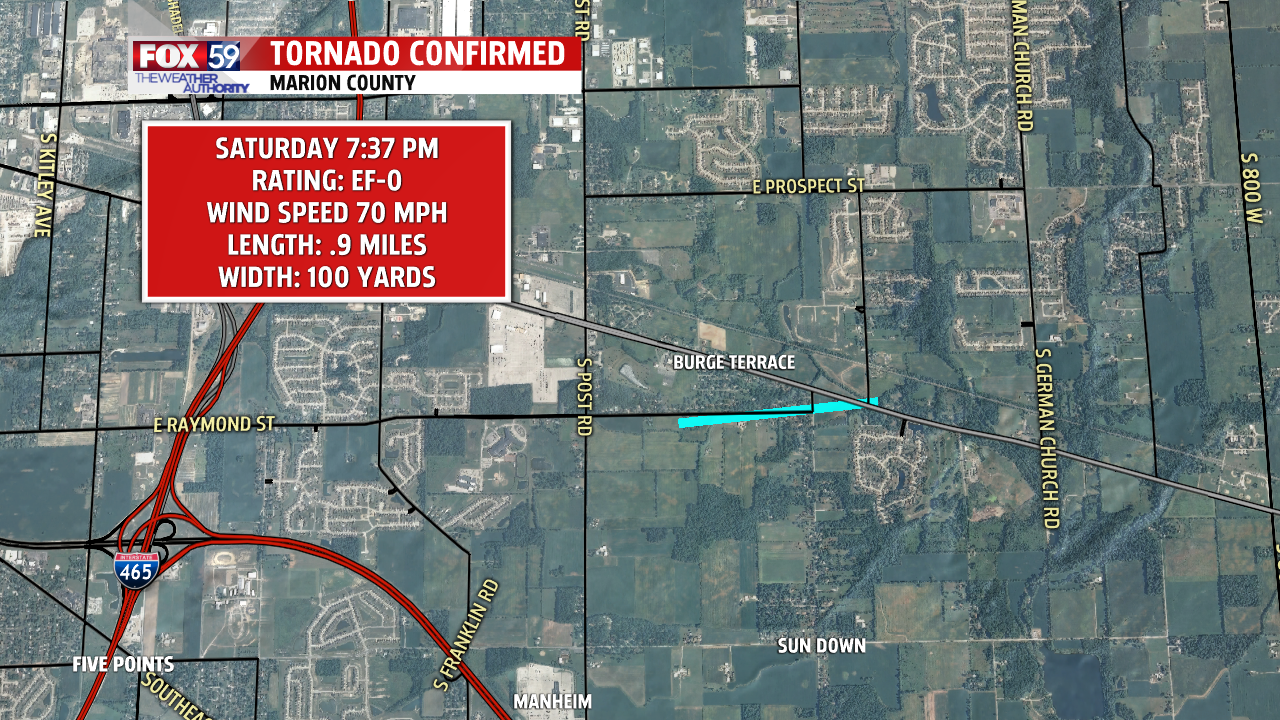 The Rush County tornado has been rated an EF2. It occurred three to four miles south of Rushville, and we are still awaiting further information.

A EF-0 tornado briefly  occurred in Fayette County, near Bentonville, and lasted about one minute with 80 mph winds just after 9 p.m. An additional brief tornado was confirmed by the NWS Wilmington, Ohio in rural Union County.

Additional storms were identified in Bartholomew and Decatur counties, a product of straight line winds. The final tornado report came in near 10 p.m. in far east Indiana, near Richmond, which brought the total for the day to nine. Damage from the storm was reported at the Richmond Mall. No further information is available at this time.

There has been an incredible uptick in severe weather events across central Indiana in just under the last two months. Since April 26, there have been six severe weather days, with multiple tornadoes reported on May 27 and June 16. The state count for tornadoes in 2019 is roughly two dozen, which is equal to the average for an entire year in Indiana.