It is a quiet, cloudy and cold start to our Sunday. There will be several dry hours today ahead of a winter storm system that will impact central Indiana starting tonight! Highs this afternoon will rise into the lower to mid-30s before snow showers move into the state. This morning and early afternoon will be a good time to get any errands completed before the snow showers arrive and the advisory begins. 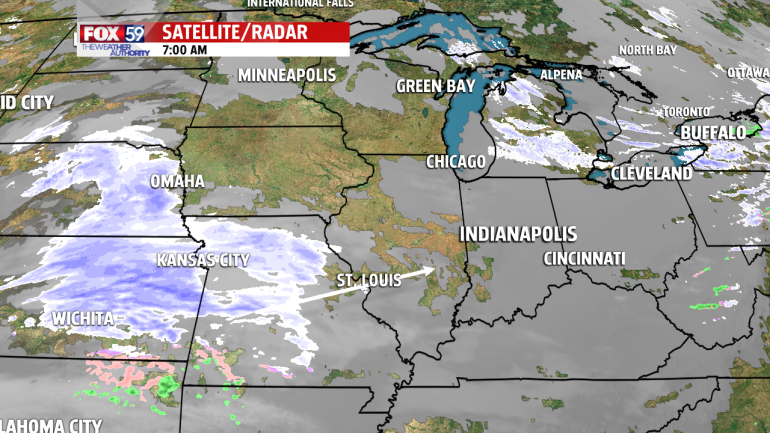 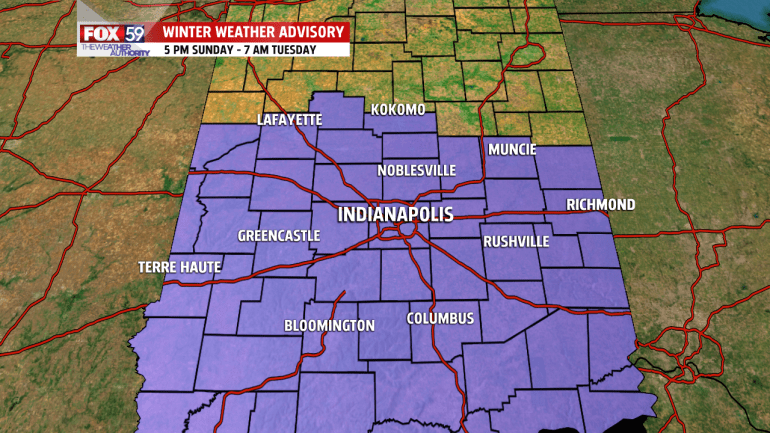 A Winter Weather Advisory has been issued for the majority of Indiana as two rounds of wintry weather loom in the forecast. The advisory will begin 5 p.m. Sunday and is scheduled to expire at 7 a.m. Tuesday. During this time frame, tricky travel conditions and accumulating snowfall are likely. The first round could bring 2” to 4” of snow to the area with an additional 1” to 2” possible in the second wave. 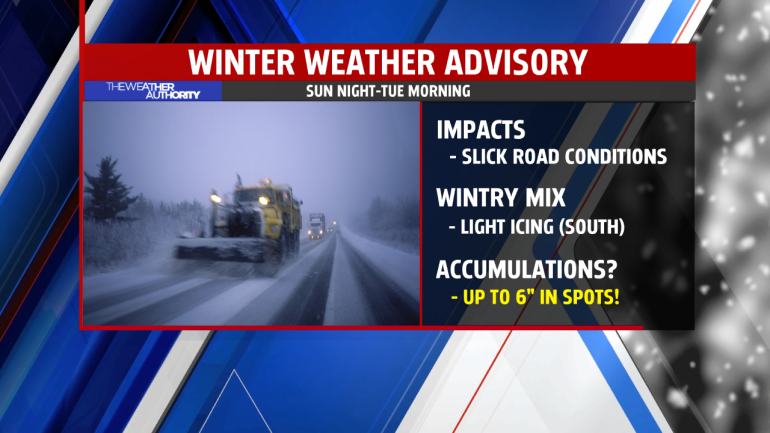 Potential Totals – *Could have some adjustments! *

Forecast models on Sunday morning were showing the highest snow total potential along and near the I-70 corridor. In the heavy band, up to 6” of snow could accumulate in spots after seeing BOTH rounds! Indianapolis, Bloomington and Rushville are in the 4” to 6” zone. The cities of Kokomo, Frankfort and Bedford fall in the 2” to 4” snow range. Our southernmost counties could see freezing rain/wintry mix, which could result in light “icing” on roads and sidewalks. 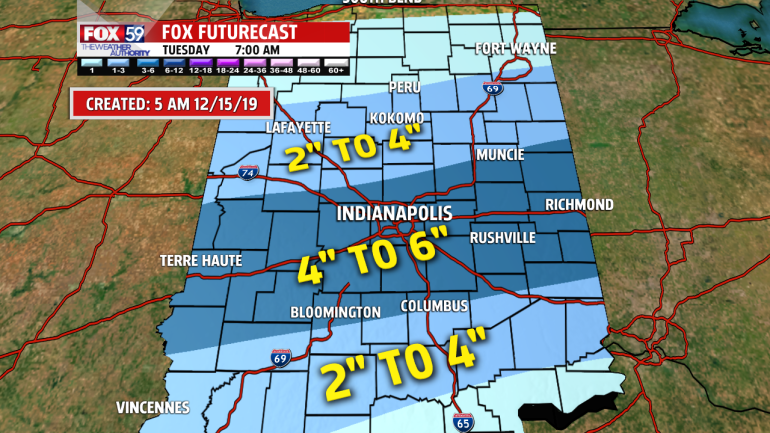 The leading edge of the snow is moving into western Illinois at 10 a.m. There could be peeks of sunshine in Indiana early in the day, but more clouds are going to move into the state as we head into the afternoon. According to FOX59 Futurecast, snow showers begin to move into our western/southwestern counties around 5 p.m. and close in on Indianapolis near 7 p.m. The precipitation turns more widespread overnight, which is the time period where most of the snowfall will stick to the ground. As a result, travel could turn difficult this evening and tonight. The snow could even drop the visibility at times. Be prepared for a slick Monday morning commute! 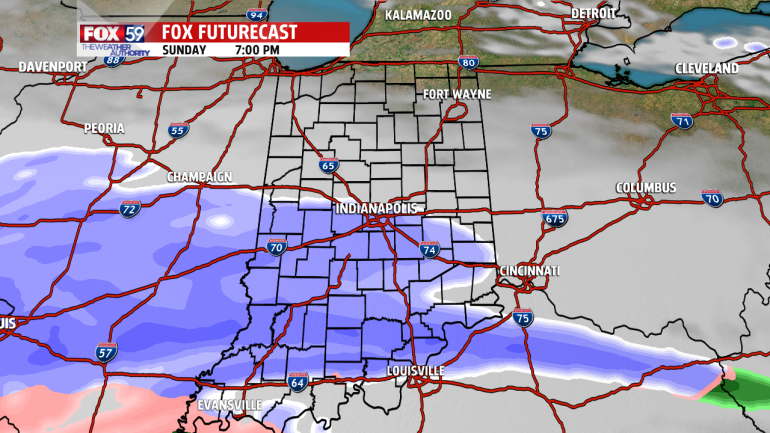 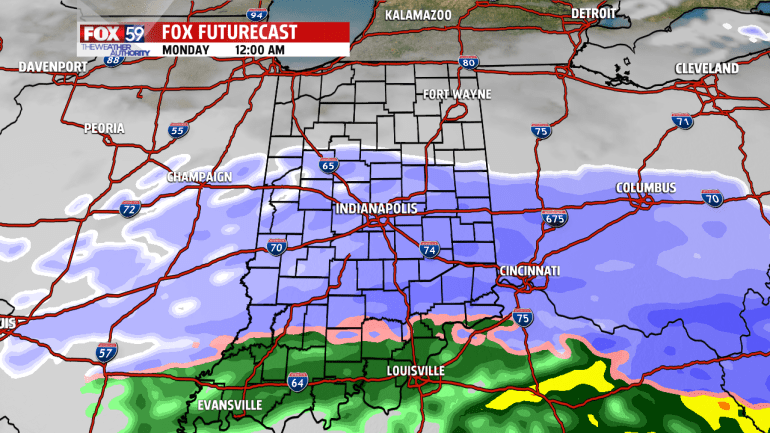 The second round of precipitation is going to arrive Monday afternoon and evening. The wintry mix and snowfall will mainly impact the southern half of the state and could bring an additional inch or two. The snow chances will continue into early Tuesday morning, which means another slick drive into work is expected on Tuesday as well. Temperatures will fall behind the system with lows in the teens returning midweek. 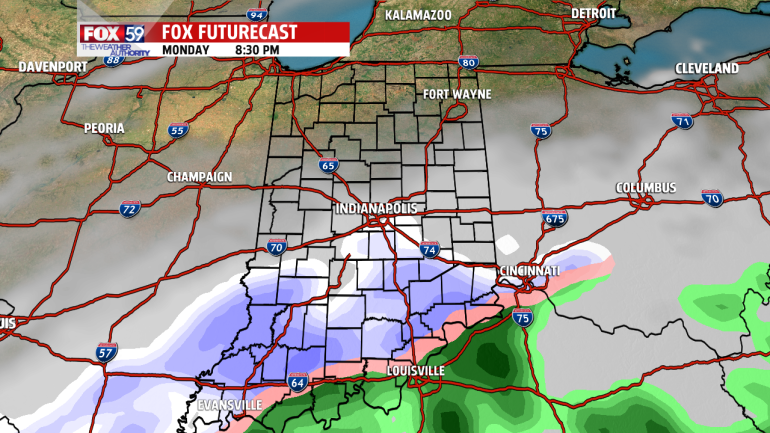 Stay tuned for more updates from the FOX59 Weather Authority team! We will closely watch for updates and the latest trends within the next 24 to 48 hours. Regardless of any forecast changes, be sure to be prepared for hazardous travel until the quiet weather builds back into the state late in the work week! 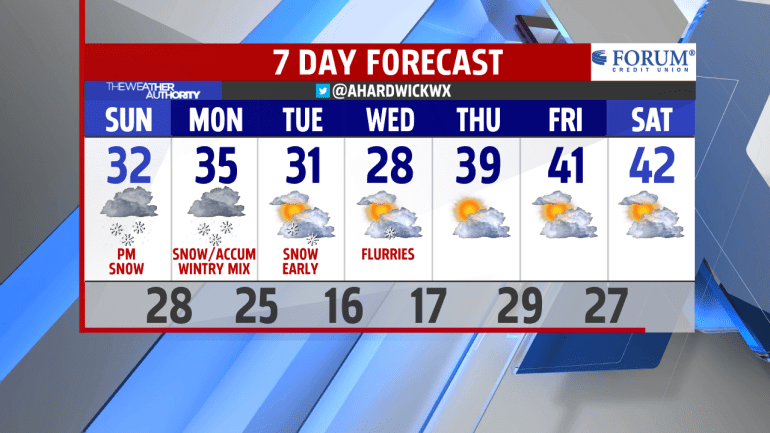